Damage induced to cellular constituents by oxygen-derived free radicals have been accepted to play a crucial role in the pathogenesis of a wide range of chronic and degenerative disorders (aging, atherosclerosis, neurodegeneration cancer, cataract), as well as in acute clinical conditions (ischemia-reperfusion) (1).  Therefore, substances with antioxidant properties have recently been given unprecedented attention as possible therapeutic and preventive agents (2).

Bio-catalyzer a.r No. 11 (Bio-Normalizer), a health food prepared from a yeast fermented mixture of medicinal plants (Carica papaya, Pennisetum pupureum, Sechium edule), has been recently reported to posses hydroxyl radical scavenging action resistant to both heat and acid treatment, from in vitro experiments using EPR spectroscopy (3).  Evidence has also been reported for a protective effect of Bio-Normalizer supplementation against oxidative damage in the brain with different model systems.  Oral administration of Bio-Normalizer in rats has been reported to significantly decrease the release of monoamine metabolites and the occurrence of lipid peroxidation in iron-induced epileptogenic focus in the brain (4,5).  Bio-Normalizer supplementation was reported to increase the superoxide dismutase activity in rat brain, decrease the age-related formation of thiobarbituric acid reactive substances (TBARS), improve the physical condition of the rats and increase life span (6).

To define the antioxidant activity of a substance, it is necessary to evaluate its efficacy in a wide range of oxidative conditions.  Thus, to better delineate the activity of Bio-Normalizer against oxygen radicals-mediated injury and analyze the possibility for therapeutic use of Bio-Normalizer to rats and investigated the consequences of oral supplementation on in vitro models of oxidative stress-induced damage.  Two in vitro model systems of oxidative damage were used: 1) ischemia-reperfusion on the Langendoff heart; 2) induced oxidation of heart homogenates by the lipid soluble azo-initiator of peroxyl radicals, AMVN (2,2′-azobis (2,4-dimethylvaleronitrile).

Cardiac tissue is a well-recognized target of oxidative stress.  In particular ischemia-reperfusion conditions, such as those occurring during a process of myocardial infarction, are known to increase cellular damage as a result of free radical generation (7).  Thus, the identification of agents able to prevent oxidative modification of cardiac tissue is an important pharmacological aim.

Male Sprague-Dawley rats (250-300 g) were obtained from Bantin and Kingman (Fremont, CA).  All animals were allowed to ad libitum access to water with or without 0.1% (w/v) Bio-Normalizer and to standard laboratory food for 6 weeks.

The rats were anesthetized with diethyl ether.  Heparin (400 units) was injected intravenously, then the heart was excited and the aorta was immediately attached to the Langendorff retrograde perfusion apparatus (8).  A modified Krebs-Bicarbonate buffer containing 2.5 mM Ca2+ and 10 mM glucose was filtered and used as perfusate.  The perfusate was gassed with 95% O2/5% CO2 and aortic pressure was maintained at 900 mmH2O.  Temperature nad pH were monitored consistently and maintained at 370C and 7.4 ± 0.05, respectively.  After an initial 20 minutes equilibration period, 40 minutes of “no-flow” normothermic global ischemia was followed by 20 minutes of reperfusion.

Rat hearts, isolated and perfused for 20 minutes as reported above, were homogenized at concentration of 200 mg tissue/ml in nitrogen gassed 50 mM phosphate buffer at pH 7.4, containing 1 mM deferoxamine mesylate, by using a ultraturrax homogenizer.  The homogenates were then sonicated for 90 seconds by using a tip sonicator (Branson Sonic Power Co.).  Aliquots were incubated at concentration of 10 mg protein/ml in the presence or in the absence of AMVN (5 mM final concentration) at 42oC for 1 hr.  Protein concentrations of the homogenates were measured by Lowry method (9) with bovine serum albumin as a standard.

After incubation, BHT (200 mM, final concentration) was added in order to stop the oxidative reaction.  TBARS formation were then measured as described by Slater (10) by using 1,1,3,3-tetramethoxypropane (TMP) as a standard.

After incubation, cardiac homogenates were mixed with EDTA (100 mM, final concentration) and protein carbonyl derivatives were measured as previously reported (11).

All data are expressed as means ± S.E.M. (n ³ 6).  An analysis of variance was used; when a significant F-values was obtained, comparisons were carried out using the Student-t test.  A difference was considered to be significant when p< 0.05.

When rat hearts were exposed to ischemia-reperfusion injury in the Langendorff apparatus, an increase in the leakage of LDH into coronary effluent was observed during reperfusion following 40 minutes of global ischemia.  Heart isolated from Bio-Normalizer supplemented animals showed a lower level of LDH leakage than hearts from control animals (p< 0.01) (Figure 1), thus indicating cardiac tissue protection against ischemia-reperfusion injury by oral Bio-Normalizer supplementation.

To better define the protective action of Bio-Normalizer in rat cardiac tissue, we analyzed the effect of supplementation on the susceptibility of heart homogenates to oxidative stress induced by peroxyl radicals.  The hydrophobic azo-initiator AMVN was used as a specific source of the peroxyl radicals generated at a constant rate upon thermal decomposition of the azo-initiator (12).

Exposure of rat heart homogenates to AMVN at 42oC resulted in higher levels of TBARS and protein carbonyl derivative formation as compared to samples incubated in the absence of the peroxyl radical generator.  The level of TBARS and protein carbonyl derivatives accumulated in cardiac homogenates prepared from Bio-Nor              malizer supplemented rats was significantly lower than those from control animals (p<0.05) (Figure 2), thus indicating efficient scavenging of peroxyl radicals generated in hydrophobic region of the heart tissue by components in Bio-Normalizer. 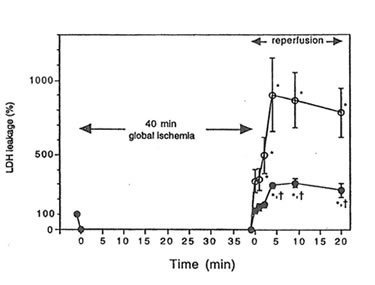 Figure 1. The effect of Bio-Normalizer supplementation on leakage of LDH from the isolated Langendorff rat heart during reperfusion.  LDH leakage into the coronary effluent from control (m) or Bio-Normalizer supplemented hearts (l) was measured.  LDH leakage of pre-ischemic period was expressed as 100%.  Values are expressed as mean ± S.E.M. obtained in 6 different experiments.  *p < 0.01 compared with pre-ischemic value. †p< 0.01 compared with the values from control hearts.

Figure 2. Effect of Bio-Normalizer supplementation on AMVN-induced accumulation of TBARS and protein carbonylation in rat heart homogenates.  Cardiac homogenates (10 mg protein/ml) prepared from animals on control  (dark symbols) or Bio-Normalizer supplemented diets (dashed symbols) were exposed to peroxyl radicals generated from 5 mM AMVN at 42oC for the times indicated.  TBARS (a) and protein carbonyl derivatives (B) are given as mean ± S.E.M. of 6 different hearts from each group.

Orally supplemented Bio-Normalizer protects the rat Langerdorff heart against ischemia-reperfusion injury.  Among different mechanisms that could be responsible for the protective effect observed, an antioxidant action can be suggested since Bio-Normalizer significantly protects against lipid and protein oxidation induced by AMVN generated peroxyl radicals.

Our finding on the effect of Bio-Normalizer supplementation against AMVN-induced damage in heart tissue strengthens the evidence for the antioxidant properties of this natural product and better defines the molecular mechanism of action.

Bio-Normalizer supplementation has been documented to protect the rat brain against lipid peroxidation (4-6).  However, due the complexity of the oxidative systems used, the antioxidant action could be exerted through different mechanisms, i.e. by metal-chelation, by scavenging of hydroxyl radical, by an effect on antioxidant enzymes, or by reaction with peroxyl radicals.  AMVN is a specific source of peroxyl radicals (12), thus it can used to test unambiguously the scavenging action of a putative antioxidant against reactive oxygen species.  In our experimental condition, on the other hand, it was found (data not shown) that in the presence of an excess of the metal chelator desferoxamine (1 mM) the possible influence of adventitious iron was eliminated.

It is not known which components of Bio-Normalizer or product of Bio-Normalizer formed by in vivo bioactivation is responsible for the protection observed.  However, since AMVN generates peroxyl radical in the lipophilic phase (12), it can be predicted that a hydrophobic substance or one able to interact with hydrophobic domains is responsible for the effect.

The data indicate that orally supplemented Bio-Normalizer elevates the cardiac tissue potential for peroxyl radical quenching and protects the heart against injury caused by ischemia-reperfusion.  Further studies are warranted to determine if Bio-Normalizer is useful as a preventive or therapeutic agent for the protection against oxidative stress.