International Workshop on Nutritional Approach to Aging and Disease 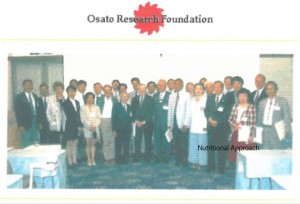 Summary of the International Workshop

“Nutritional Approach to Aging and Disease”

On August l-3, 1995 in Gifu, Japan the Osato Research Foundation sponsored an international workshop entitled “Nutritional Approach to Aging and Disease” coordinated by Yuki Hayashi. The workshop was organized by the Scientific Committee: Lester Packer, Ph.D. Department of Molecular and Cell Biology, University of California, Berkeley; Junji Yodoi, M.D., Ph.D. Department of Biological Response, Institute for Virus Research, Kyoto University; and Takashi Okamoto, M. D. Department of Molecular Genetics, Nagoya City University School of Medicine. The workshop was designed to bring a small group of scientists and clinicians together to discuss basic research and clinical strategies using nutritional approaches to the management of disease and aging processes. We discussed whether it was possible to use nutritional supplements to modify the outcome of various disease states, or aging itself.

The program began Tuesday evening when we were welcomed by the chairman of the Osato Research Foundation, Dr. James Akira Osato. Official addresses were made by the Minister of Health of the Gifu Prefecture, Dr. Seichi Oda and by Dr. Soroku Yamagata, Executive Director of the Japanese Foundation for AIDS Prevention. After brief introductory addresses by the organizing committee, Dr. Lester Packer gave the opening lecture “Oxygen is a Dangerous Friend”. His lecture was an overview of the interactions of oxygen free radicals in health and disease and how antioxidants could modulate these reactions. Then, Dr. Masaharu Tsuchiya of Keio University School of Medicine presented in multi-media style his topic of “Nutritional and Mucosal Immune Defense”. His presentation included videos of lymphocytes interacting with the endothelial lining of venules in Peyer’s patches. These opening lectures were then followed by an elegant reception where the conference participants began their informal discussions.

The conference began in earnest the following day when 16 speakers were scheduled. The morning started with session I “Oxidants and Antioxidants in Heath and Disease” chaired by Dr. Takashi Okamoto. Basic interrelationships were discussed by Drs. Barry Halliwell, Masayasu Inoue, Maret Traber and Makotto Suematsu.

The special lecture session was then chaired by Drs. Tsuknatoaro Kishida and Junji Yodoi. Dr. Luc Montagnier gave a state of the art lecture on HIV infection and the role of oxidative stress in HIV progression to AIDS. Dr. Kiyoshi Takatsuki discussed adult T-cell leukemia, a disorder first reported in Japan, which is caused by HTLV-1. Both Drs. Montagnier and Takatsuki discussed the likely involvement of free radicals in viral activation during diseases such as AIDS and adult T-cell leukemia, respectively. These diseases both involve human retroviruses and modulation of CD4 lymphocytes.

Session II “Infectious Viral Disease and Immune Response” chaired by Dr. Lester Packer then followed. Drs. Junji Yodoi, Izumi Nakajima, Takashi Okamoto and Julian Gold took this discussion of free radical involvement in immune response from the intracellular perspective of how reactive oxygen species might modulate immune responses at the molecular and cellular level to the nutritional management of patients with HIV/AIDS.

Session III was devoted to a discussion of chronic and degenerative diseases. A variety of disorders from diabetes, cancer, cardiovascular disease to arthritis was covered by a stellar selection of speakers including Drs. Roger McDonald, Yay Liange W. (Bill) Go, B. Sarkar, David M. Klurfied, E.R. Greenberg, and David R. Blake. The participants were then invited to enjoy a special program on the Nagara River that included a Japanese box dinner and the exciting arrival of the Emperor’s fishermen and their cormorants.

The meeting concluded with a round table discussion led by the scientific committee (Drs. Lester Packer, Junji Yodoi, Takashi Okamoto) concerning the potential of nutritional modifications to modulate disease and aging. Highlights of the discussion included the idea that evaluation of natural products was difficult, yet interactions between various components, and even the metabolism to effective forms might be necessary to obtain efficacious results. There was quite a heated discussion between proponents for the demand that active components (and their mechanism of action) should be defined and the proponents of the idea that traditional mixtures should be evaluated in their complex forms. The point was made that foods contain a variety of components, not all of which are known, and that dependence on isolated substances might limit intake of otherwise important factors.

The workshop concluded with the recognition of the potential for nutrient modulation of disease processes and the simultaneous lack of sufficient information to document efficacious supplementation. Therefore, another meeting was announced by Dr. Luc Montagnier on the topic “Oxidative Stress, Redox Regulation and Human Disease” that is planned to be held in Paris, France May 20-24, 1996 to be co-organized by Drs. Luc Montagnier and Catherine Pasquier.