Effects of Bio-Normalizer, A Natural Japanese food Supplement, on Oxygen Radical and Tumor Necrosis Factor Production by Monocytes and Macrophages

Bio-normalizer (BN) is a natural health food supplement prepared by yeast fermentation of Carica papaya and some other tropical herbs and commercially available in Japan and the Philippines. It has been shown that BN exhibited beneficial therapeutic action for a variety of human pathologies and maintained a high quality of life even in very severely afflicted patients. Bio-normalizer is also prescribed to enhance an organism’s resistance to infection. However, in contrast to the previously demonstrated practical advantages of BN application as a pharmacological agent, the mechanism(s) of its biological activity is not fully understood. Several papers have shown that BN is a scavenger of active oxygen species (1, 2). Therefore, BN may suppress free radical overproduction by direct interaction with harmful oxygen radicals, including hydroxyl radicals. We found that the BN effects on oxygen radical production by phagocytosing cells are much more complicated (3). Thus, in some experimental models of aseptic inflammation, such as peritoneal dextran sulfate-, lung asbestos-, cobalt-and bleomycin-induced inflammatory disorders, BN significantly suppressed the inflammatory response of granulocytes, including hemotaxis, and the release of hydroxyl radicals from inflamed cells. On the other hand, BN enhanced tissue macrophage recruitment into the inflammatory loci, substantially increased the phagocytosis of Staphylococcus aureus and blood monocyte and tissue macrophage production of superoxide ions.

These findings suggest that in addition to the direct antioxidant activity of BN, there probably is an even more important regulatory function of BN that appears to be responsible for maintaining the oxidant/antioxidant balance in an organism. In this chapter we attempted to study the mechanism of BN stimulation of macrophages/ monocytes. It was found that in addition to effecting intra-and extracellular superoxide production, BN stimulated tumor necrosis factor (α-TNF) formation, a known and powerful mediator of macrophage and monocyte antitumor activity and an oxidative burst trigger in phagocytes (4,5). Moreover, it is known that augmentation of phagocyte activity is frequently preceded by an influx of calcium into the cytoplasm (6,7). Therefore, we also studied possible relationships between the previously mentioned effects of BN and calcium transport into phagocytes.

Bio-normalizer was produced by the fermentation of Carica papaya tropical herbal plants. A major component of BN is a mixture of plant and yeast glycopolysaccharides. In addition, BN contains amino acids, such as tryptophane, leucine, glutamic, and aspartic acids, vitamins B6 and C, glucose, and the protease/antiprotease system of papain. Under our experimental conditions, the suspension of BN granules was prepared in Hanks’ balanced salt solution (HBSS) daily. After 30 min incubation, the insoluble portion of BN particles was removed by centrifugation, and the clear supernatant containing the soluble BN fraction (SBN) was used in the experiments. The soluble bio-normalizer fraction contained all the compounds except the insoluble highly molecular glycopolysaccharides.

Five mL of venous blood was obtained from healthy volunteers by venipuncture using heparinized vacutainers. The blood was layered on a dextran-metrizoate mixture (5 mL, 2:5 v/v) and incubated at room temperature for 30 min to sediment erythrocytes. Then the leukocyte-rich plasma was placed in 3 mL Monoprep solution and centrifuged at 400 x g for 30 min. The top layer of mononuclear cells was washed twice in cold HBSS and incubated in 2 cm polystyrene dishes at 37°C for 1 h. The lymphocyte-containing supernatant was discarded, and the monocytes attached to the bottom of the dishes were resuspended in a minimal essential medium (MEM). The cell suspension contained >95% monocytes as measured by differential cell count using a Coulter counter. Monocyte viability was equal to 90-98% as assessed by the exclusion of 0.2% trypan blue dye.

Animals and the Macrophage Preparation

Adult male Wistar rats were injected intraperitoneally with 10 mL HBSS and sacrificed 5 min later. The peritoneal lavage fluid was removed, placed on the top of Monoprep solution (d = 1.068), and centrifuged at 400 x g for 30 min. The upper part containing mononuclear cells was washed twice with cold Ca, Mg-free HBSS. Monocytes and macrophages were attached to the plastic surface by incubating at 37°C and resuspended in MEM supplied with 1% heat-inactivated calf serum. A differential cell count was performed using Giemsa staining, about 98% of the cells were macrophages and monocytes; >95% cells excluded Trypan blue. Measurement of Superoxide Generation by Human Blood Monocytes and Rat Peritoneal Macrophages

Superoxide release from phagocytes was measured by chemiluminescence (CL) at 37°C under continuous mixing. The monocyte or macrophage suspension (105 cells) was added to a polystyrene cuvette containing 1 mL preheated HBSS with 50 µM  lucigenin, a specific CL indicator for superoxide ion, and incubated for 5-6 min. The intensity of spontaneous CL was continuously recorded for 5 min. Then, 10 ng phorbol-12-myristate-0-acetate (PMA) was added to the cells; and the amplitude of the CL response to the activator was measured as the difference between the maximal intensities of the activated and spontaneous CL. The results were expressed as mV per 106 cells.

The NADPH-oxidase activity of monocytes and macrophages was measured by the method described by Bellavite et al. (8). The cells (5 x 106) were activated with 10 ng PMA for 3 min before being disruptured by adding Triton X-100. Superoxide production was evaluated by determining the rate of SOD-inhibitable cyt c reduction at 550 nm. The reaction was started by the addition of 250 mM NADPH. The difference between the rate of cytochrome c reduction with and without 10 mg/mL SOD was regarded as the rate of superoxide production. The results were expressed as nmol O2-/min/106 cells.

Macrophages (3 x 106 cells) were incubated with 1 mM hydroetidine in 3 mL HBSS at room temperature for 20 min. Then, 10 ng/mL PMA and SBN at appropriate concentrations were added, and the intensity of fluorescence excited at 473 nm and emitted at 610 nm was measured continuously for 15 min.

Calcium transport in cells was studied with the fluorescent calcium indicator Quin 2AM. Rat peritoneal macrophages were incubated at 37°C with Quin 2AM (2 µM/106 cells) and SBN at appropriate concentrations in Ca-free HBSS for 60 min. Then, the cells were rinsed twice and suspended in HBSS. Calcium influx was started by the addition of 1 mM CaCl2. After 5 min, the cells were lysed with 0.05% Triton X-100, and the calcium ion concentration bound to Quin 2AM was determined fluorometrically.

Isolated human blood monocytes (2.5 x 106 cells/mL) were incubated at 37°C with SBN in an RPMI 1640 medium for 1 h. Then, the cells were centrifuged, washed, and incubated in the same medium supplied with 10% fetal calf serum in the 24-vial plate for 14 h. The content of TNF in the supernatant was determined using the TNF-sensitive murine fibroblast cell line L929. The fibroblasts were placed in the 96-vial plate, and 10 µL of supernatant was added to each vial. The content of nonlysed fibroblasts was measured spectrophotometrically by staining the viable cells with crystal violet dye. The tumor necrosis factor (α-TNF) concentration in the supernatant was determined using the calibration curve obtained with recombinant α-TNF in the concentration range of 16-1000 pg/mL.

It was found that SBN increased lucigenin-amplified PMA-activated CL of human blood monocytes (Fig. 12.1) in a concentration-dependent manner. Maximum stimulation of SBN (approximately 250% of the control value obtained without SBN) was observed at a concentration of 10 mg/mL. We obtained similar results previously for rat peritoneal macrophages (1). The incubation of rat peritoneal macrophages with 10 mg/mL of SBN resulted in an approximately 115% increase in the intracellular production of active oxygen species measured by hydroetidine fluorescence (Fig. 12.2). The hydroetidine fluorescence was extremely sensitive to sodium cyanide; the addition of 1mM NaCN decreased the intensity of fluorescence response to PMA down to the initial level (data not shown). Apparently, the fluorescence probe was oxidized by the intracellular active oxygen species generated by mitochondrial enzymes. Since lucigenin-amplified CL is insensitive to cyanide, it is thought to originate from NADPH-oxidase bound to the cytoplasmic membrane. Lucigenin specifically reacts with the NADPH-oxidase-generated superoxide ions inside and outside the cells (9). Therefore, our findings suggest that SBN does not interfere with the mitochondrial enzymes, but presumably it affects the activity and/or the activation process of monocyte/macrophage NADPH oxidase.

It is known that the NADPH oxidase activation rate is highly dependent on calcium transport in the cells. Therefore, we studied the effect of SBN on the calcium influx into rat peritoneal macrophages and found that it increased in a concentration-dependent manner by 1.45 to 1.6 times (Fig. 12.3). Therefore, the SBN-stimulated increase of intracellular calcium ion concentration appears to be one of the main causes of extracellular superoxide generation enhancement.

Another important effect of SBN on phagocyte activity is the stimulation of α-TNF production by blood monocytes (Fig. 12.4). A concentration-dependent curve has two maxima (at 1 µg/mL and 10 mg/mL of SBN). It may be suggested that at least the second maximum reflects the interconnection between the superoxide and α-TNF releases, considering the ability of α-TNF to activate monocyte/macrophage superoxide production (10). Thus, we can assume that there are two major mechanisms of superoxide production stimulation by SBN: (i) the direct activation of NADPH oxidase via the activation of calcium transport into the cytoplasm, and (ii) increased α-TNF formation that triggers the NADPH oxidase activity by itself. Thus, the supposed cytotoxic activity of BN on tumor cells may be due to both the enhanced superoxide release and α-TNF production by tissue macrophages and blood monocytes. 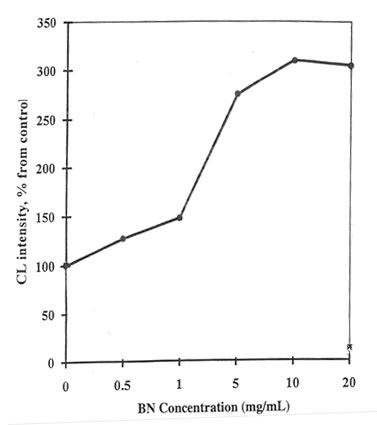 Figure 12.1. The effect of BN on lucigenin-amplified PMA-stimulated Cl of human blood monocytes. Monocyte suspension (105 cells) was incubated with 50 µM lucigenin in 1 ml preheated HBSS for 5-6 min. The intensity of spontaneous CL was recorded continuously for 5 min. Then 10 ng PMA was added to the cells, and the amplitude of the CL response to the activator was measured as a difference between the maximum intensities of the activated and spontaneous CL. 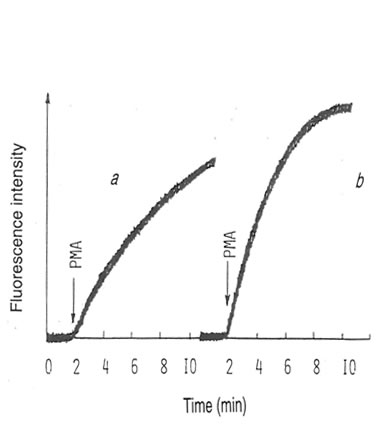 Figure 12.2. Fluorescent curves in A) absence and B) presence of BN. Macrophages (3 x 106 cells) were incubated with 1 mM hydroetidine in 3 ml HBSS at room temperature for 20 min. Then 10 ng/mL PMA and BN at appropriate concentrations were added, and the intensity of fluorescence excited at 473 nm and emitted at 610 nm was measured continuously. 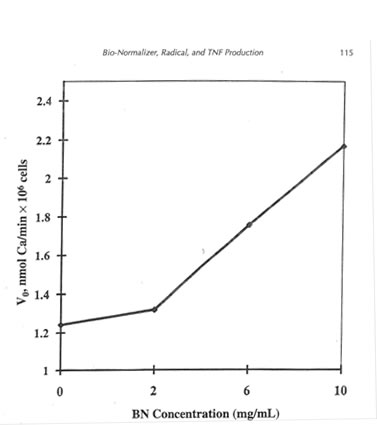 Figure 12.3. The effect of BN on the calcium influx into rat peritoneal macrophages. Rat peritoneal macrophages were incubated with Quin 2AM (2 µM/106 cells) and SBN at appropriate concentration in Ca-free HBSS at 37°C for 60 min. Then, the cells were rinsed twice and suspended in HBSS. The calcium influx was started with the addition of 1 mM CaCl2. After 5 min, the cells were lysed with 0.05% Triton X-100, and the concentration of calcium ions bound to Quin 2AM was determined fluorometrically. 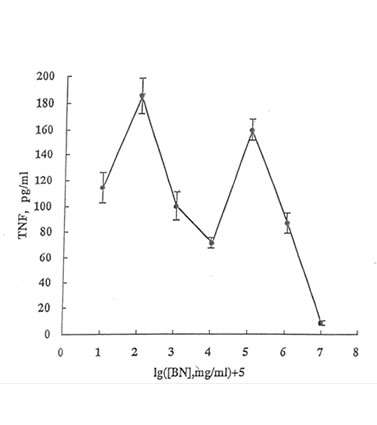 Figure 12.4. Stimulation with BN of blood monocyte α-TNF production. Isolated human blood monocytes (2.5 X 106 cells/ml) were incubated at 37°C with SBN in the RPMI 1640 medium for 1 h. Then, the cells were centrifuged, washed, and incubated in the same medium supplied with 10% fetal calf serum. The content of TNF in the supernatant was determined using TNF -sensitive murine fibroblast cell line L929.