Effects of BioNormalizer on Gene Expression of Human

Bio-Normalizer (BN) has been shown to have free radical scavenging action. In this report we examined  the effects of BN on gene expression of Human Immunodeficiency Virus type 1 (HIV-1) using transient CAT assay. Results showed that there is no significant effect on basal level of HIV-1 promoter activity. In the present experimental setting, BN was not able to suppress HIV gene expression even in the presence of tumor  necrosis factor (TNF) which is known to augment HIV-1 gene expression through production of oxygen free radicals. We propose that  this pilot study be further evaluated to qualify  the initial findings with BN.

Control of HIV-1 gene expression is considered to be crucial for prevention of clinical development of acquired immunodeficiency syndrome (AIDS). It has been shown that latent HIV-1 provirus is activated by actions of a number of signals including the one elicited by TNF (Ref). We have previously demonstrated that TNF could augment HIV gene expression using transient CAT assays and showed that one of the cis-regulatory elements within the viral long terminal repeat (LTR), namely NFkB-binding sites, was indispensable for the action of TNF (Ref).  It is considered that TNF-derived signal in the cells could stimulate free radical production leading to the activation of NFkB (Ref).

Bio Normalizer (BN, manufactured by Sun-O International Inc., Gifu, Japan) is a white granular yeast-fermented product from Carica papaya and other tropical herbal plants. It has been scientifically proven to be a potent free radical scavenger (Ref). Its potentials for the management of different free radical­ mediated diseases including AIDS is currently being studied.

The monkey fibroblast cell line COS-1 was maintained in Dulbecco’s Minimum Essential Medium (MEM) supplemented with 10% fetal bovine serum. Cytotoxicity activity of BN was examined using fermented BN.  BN (100 mg/ml) solution was fermented at 37°C for 28 hours and was centrifuged at 15000 g for 30 minutes. The supernatant was collected and filtered through 0.22 µm filter disc. Incorporation of 3H-TdR was measured after 24 hrs.

COS-1 cells were transfected with plasmid DNA by calcium phosphate precipitation according to the method previously described (Ref).  CAT enzyme activities in fixed amounts of cell lysates (100µl) of cells harvested 48 hours after transfection were measured after 12 hours of incubation. Transfection efficiency was measured using pRSVGal, expressing β-galactosidase gene under the control of RSV LTR, as an internal control.  Recombinant TNF-α (purchased from Dainippon Pharmaceutical Company Ltd., Tokyo, Japan) was added 12 hours before cell harvest.

BN showed no cytotoxicity effect on cell culture.  In fig. 1 various concentrations (up to 0.05%) of fermented and non­fermented BN were added to cell culture medium. Cells were harvested after 24 hrs of incubation and incorporation of 3H-TdR was measured. The results demonstrated minimal difference on degree of cell proliferation.

Fig. 2 shows that HIV gene expression as measured in CAT assays was not affected by the addition of BN solution. We then examined the effects of BN on TNF-α.-stimulated HlV gene expression (Fig. 3).  BN failed to show any suppressive effect on the action of TNF- α.

Radical scavengers with biological efficacy have recently received  attention as possible  therapeutic reagent  in the management of various  chronic progressive diseases  including AIDS.  N-acetyl cysteine (NAC), for example,  has been shown  to suppress the TNF-driven gene expression from the HIV-1 LTR (Ref).  However, since high concentration of NAC was required to achieve  the effect, alternative reagents have been searched.  In this report, we describe our  preliminary findings  with biological product BN. Although the present experimental setting  did  not show any significant results,  further investigations involving different experimental conditions should  be attempted to evaluate the feasibility of using BN as a nutritional supplement with a therapeutic potential. Since BN can be administered orally,  it has the  advantage of gaining  wider acceptance over existing substances with the same biological properties. 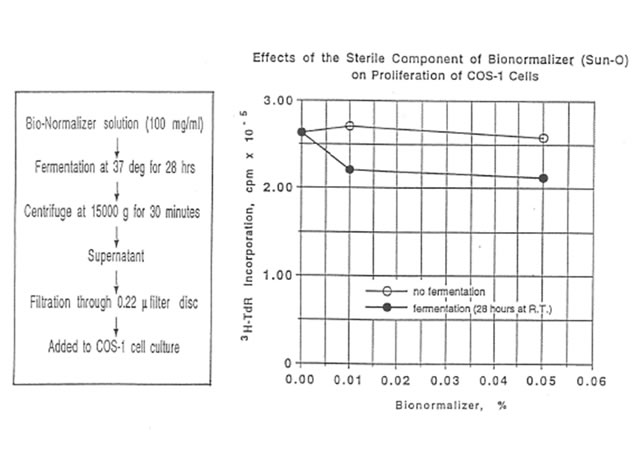 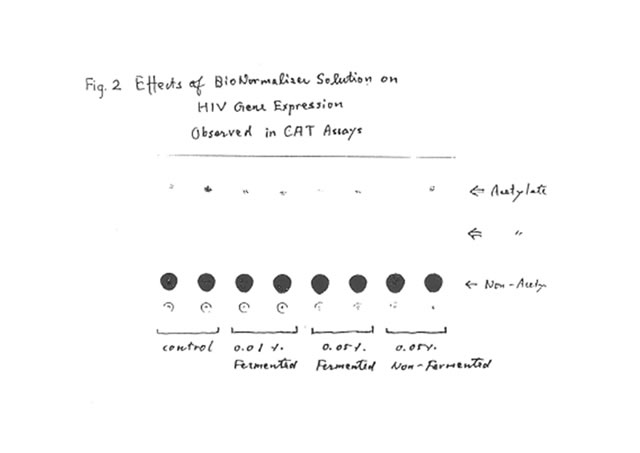 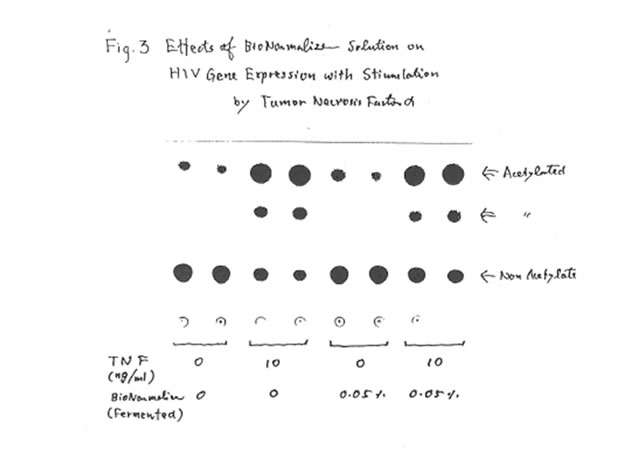