Manuscript for the Proceeding of the Conference on the Development of Antioxidant and Chelating Drugs for the Treatment of Environment-associated Diseases (Moscow, Russia, April 22-23, 1994)

Free radicals were generated in the aqueous phase and the brain homogenate phase by thermal decomposition of two azo initiators, the hydrophilic 2,2′-azobis (2-amidinopropane hydrochloride, AAPH) and the hydrophobic 2,2′-azobis (2,4-dimethylvaleronitrile, AMVN). These compounds generated carbon radicals which reacted with oxygen immediately to produce peroxyl radicals. Through direct electron spin resonance (ESR) analysis and spin trapping with 5,5′-dimethyl-1-pyrroline-N-oxide, the reaction of AAPH and AMVN in both phases produced four and six prominent signals of peroxyl radicals,, respectively. These ESR signals were inhibited in a dose-dependent manner by Bio-normalizer, a natural fermented health food from papaya and other tropical herbs. Vitamin C, vitamin E, and glutathione also scavenged dose-dependently the peroxyl radicals.

We report here the first description of reduced [3H]γ-aminobutyric acid (GABA, an inhibitory amino acid neurotransmitter) release in the mouse hippocampal slices following localized peroxyl radical induction by AAPH at 37°C and provide evidence suggesting that Bio-normalizer at 0.5% may modulate the amount of releasable [3H] GABA. The data suggests that Bio-normalizer may act as a preventive antioxidant and neuromodulator of impaired GABA transmission, thought to contribute to the pathogenesis of epilepsy.

Free radicals are known to be multi-sourced but are mostly produced by the environment or as normal or aberrant by-products of oxygen metabolism. They have been implicated directly and indirectly in the pathogenesis of Parkinson’s disease, Huntington’s disease, epilepsy, schizophrenia, tardive dyskinesia, senile dementia, and several other behavioral disorders (1). Human and animal models of epilepsy for instance have revealed that the inhibitory capacity of the central nervous system, represented primarily by γ-aminobutyric acid (GABA)-mediated neurotransmission, is altered in certain convulsive disorders (2). Several factors may influence loss or decrease of GABAergic transmission ·which constitutes one of the leading hypotheses of the mechanism of epilepsy (2-4). Attempts to determine the cellular basis of convulsions and epilepsy have often focused on the hippocampus, the cortical structure associated with memory and with lowest siezure threshold (5).

While a few studies  have positively linked free radicals with the activated release of excitatory amino acid neurotransmitters such as aspartate and glutamate (6 ~ 10), to the best of our knowledge no study was reported on the putative role of free radicals on hippocampal GABA release. Through electron spin resonance (ESR) and spin trapping, the peroxyl radical generated from two thermolabile azo initiators such as hydrophilic 2,2′-azobis (2-amidinopropane) hydrochloride, AAPH) and hydrophobic 2,2′-azobis (2,4-dimethylvaleronitrile, AMVN) (11,12) was used as an index of oxidative stress while the radioactively labeled GABA release from mouse hippocampal slices was employed as a measure of brain oxidative damage. To glean some evidence concerning the antioxidant capacity of Bio-normalizer -a white, sweet, granular functional health food -in the synchronous neuronal discharge of GABA, the oxygenated buffer containing 10 mM AAPH was continuously perfused through the entire slice of hippocampus with or without Bio-normalizer.

Material: Bio-normalizer is a white, sweet, granular functional health food. It is made through a natural process of fermentation of papaya, other tropical plants and yeasts derived from traditional Japanese foodstuffs (13). It is a product of Sun-O International Inc., Gifu, Japan.

ESR spin trapping of peroxyl radicals: Peroxyl radical generated by 50 mM AAPH or 50 mM AMVN was induced in aqueous solution and brain homogenate at 37 C for 15 min. To the mixture was added 0.092 M DMPO. Then the spin adduct of peroxyl radical was measured by ESR spin trapping (JEOL, JES-FE1 XG, Tokyo, Japan) 40 s right after the addition of DMPO. The spin number of the adducts of peroxyl radical (DMPO-OOR) was calculated from the ratio of the signal height intensity of known spin quantity of 2,2,6,6-tetramethyl-4-hydroxylpiperidine-1-oxyl (TEMPOL) reference standard. Spectrometer conditions were: power, 8 mV; scan rate, 2 min; modulation amplitude, 0.08 mT; modulation frequency, 100 kHz; and band, X-band.

GABA release. After cervical dislocation, the hippocampi of male ddY mice (10 – 14 weeks old; Japan SLC Co., Ltd., Hamamatsu, Japan) were rapidly excised and transverse slices 30 μm thick were prepared using a Mcilwain tissue chopper. The slices (17.0 ± 0.78 mg) were plunged and allowed to equilibrate in 4.5 ml ice-cold Krebs-Ringer-bicarbonate (KRB) buffer (in mM: NaCl, 124; KCI, 3.5, KH2P04, 1.2; MgS04 7H20, 1.3; CaCI2, 1.2; NaHC03, 25; and glucose, 10), pH 7.4, previously_ gassed with 95% O2 and 5% CO2. and incubated at 37°c for 5 min. GABA [2,3-3H (N)] was loaded to the medium to a final concentration of 500 μM and the slices were further incubated for 30 min. Slices were then rested between two filter discs, in stainless syringe holder KS-13 (0.37 ml vol., Advantec, Tokyo) and superfused with normal KRB buffer at a rate of 1.5 ml/min for 45 min to establish a baseline efflux rate of release. Following this washout period, perfusate was collected every 30 s for a total number of 90 fractions. Two ml of counting scintillant was added to each fraction before subjecting the radioactive mixture to Liquid Scintillation Counter 703 (Aioka, Tokyo). The spontaneous release (SR1) of GABA was estimated as the area under the baseline of peak 1 (SR2), while the AAPH-evoked release [(AAPH)R1] was estimated as the area under the baseline of peak 2 [(AAPH)R2]. The ratio of the spontaneous GABA release was calculated as rSR = SR2/SR1 whereas the ratio of the AAPH-evoked release was estimated as r(AAPH)R = [(AAPH)R2/ [(AAPH)R1]·

Detection of peroxyl radical by ESR and spin trapping: DMPO was used to trap peroxyl radical in aqueous solution and hippocampal homogenate. Mixing the brain homogenate, 50 mM AAPH, and 0.092 M DMPO resulted in the trapping of the adduct (DMPO-OOR) shown in Fig. 1 having 1:2:2:1 spectrum which is strikingly similar to the adduct of DMPO with the hydroxyl radical (DMPO-OH). Nitrogen (aN) and b proton (aβH) were virtually identical to those of DMPO-OH generated by Fenton’s reagent and previously published spectra for this adduct (14). Figure 2 shows the ESR spectrum of six signals generated by 50 mM AMVN in the hippocampal homogenate and 0.092 M DMPO. The thermal decomposition of AAPH and AMVN at physiological temperature depends on their concentration and generation time as indicated by Figs. 3 and 4. The mouse brain was found to be the most susceptible tissue directly exposed to peroxyl radical from AAPH followed by liver and kidney (Fig. 5). Vitamin C, vitamin E, and glutathione were found to scavenge dose-dependently the spin adducts of peroxyl radical generated by AAPH as shown in Fig.6. Table 1 summarizes the concentration of these antioxidants and Bio-normalizer required to scavenge 50% (IC50) of the generated peroxyl radicals by AAPH and AMVN. Bio-normalizer was unequivocably demonstrated to scavenge dose-dependently the DMPO-OOR (ESR spectra not shown), IC50 at 5 mg/ml, providing a direct evidence on its scavenging potential on peroxyl radicals.

GABA release: Figure 7 shows that GABA release was apparently inhibited after the second exposure of the hippocampal slices to 10 mM AAPH. This reduction was significantly modulated when the slice was perfused with 0.5% Bio-normalizer.

Previous studies showed that AAPH injection in rats produced lipid peroxidation -one of the mechanisms implicated in cellular death -in the liver, kidney, and heart (15). Supportive of this .evidence, our ESR and spin trapping studies have demonstrated that both AAPH and AMVN could generate peroxyl radicals in the hippocampal homogenate. This organic radical attacked the brain as well as the liver and kidney perhaps by abstracting hydrogen atom from adjacent polyunsaturated fatty acids largely concentrated in the tissues to hydroperoxides which, in the presence of Fe2+, decomposed to alkoxyl radicals and aldehydes (16 ~ 17). The production rate of peroxyl radical by AAPH and AMVN depends on their concentrations and generation time. The peroxyl radical was effectively scavenged by vitamin c, vitamin E, glutathione, and Bio-normalizer in a dose-dependent manner. In our previous studies, we have detected hydroxyl radical, carbon-centered radical, and lipid peroxides generation in animal models of posttraumatic epilepsy (13,18), ischemia/reperfusion (19), and aging (20) but which were all inhibited in the presence of Bio-normalizer in the brain tissues. These neuroprotective effects of Bio-normalizer. are supported by data obtained in this study. Protecting neurons from oxidative damage caused by the intermediate peroxyl’ radical, Bio-normalizer acted as a chain-breaking antioxidant.

We report here the first description of decreased [3H]GABA release in the hippocampal slices following peroxyl radical induction (AAPH was used as initiator because it is water-soluble and could generate constantly measurable and easily-handled peroxyl radical) and provide evidence suggesting that the amount of releasable GABA may be modulated or mediated by antioxidants. Alterations in the presynaptic mechanism caused by the site-specific constant efflux of peroxyl radical through the slices may have resulted to defective synthesis of GABA or a defect in its release in the hippocampus. Other researchers have correlated-the onset of oxygen radical-induced convulsions in animals to a decrease in GABA because of the inhibition of the enzyme glutamate decarboxylase (16). Oxidants may also damage terminal autoreceptors, transport, and assymetry of lipid bilayer mediating GABA transmission (21~23). Bio-normalizer at 0.5% was found to confer immediate protection upon the hippocampal slices by a compensatory action in off-setting GABA deficiency caused by the cytotoxicity of peroxyl radical on the neurons. Future studies will aim at identifying the specific components of GABA transport in the hippocampus or the specific components in Bio-normalizer that may underlie alterations in GABA release.

Bio-normalizer is a health food with a potent scavenging potential on hydroxyl and peroxyl radicals in the brain homogenate. These species may have caused the defective synthesis of GABA (perhaps through perturbation of enzymes, autoreceptors, transport, and lipid bilayer assymetry, among others) or the defect of GABA release in the hippocampus. Their cytotoxic effects diminished GABA neurons for transmission which may consequently contribute to epilepsy and convulsions. However, this progressive neurodegeneration may be prevented by novel neuroprotective-antioxidants/scavengers such as Bio-normalizer on the potential sites of the free radical formation. Therefore Sic-normalizer may be a good preventive antioxidant in the management of epilepsy and other brain disorders.

Fig. 3. Dose-dependent and time-dependent thermal decomposition of AAPH in hippocampal homogenate at 37° C. The spin adducts of peroxyl radicals (DMPO-OOR) were calculated from the actual ESR spectra.

Fig. 4. Dose-dependent and time-dependent thermal decomposition of AMVN in hippocampal homogenate at 37° C. The spin adducts of peroxyl radicals (DMPO-OOR) were calculated from the actual ESR spectra

Fig. 5 Effect of different concentrations of AAPH on the generation of spin adducts of peroxyl radical (DMPO-OOR) at 37°C in the cortex, liver, and kidney.

Fig. 7. Release of. [3H]GABA in the mouse hippocampal slices after A A PH stimulation. A) 2 min fractional release values (black bar) at three peaks, stimulation 1 (spontaneous), stimulation 2 (AAPH-induced), and stimulation 3 (recovery); and B) ratio of the spontaneous release [rSA] and AAPH-induced [r(AAPH)A] release in untreated and Bio-normalizer-treated slices. Values are means± SO of 5-8 animals. *p < 0.005 versus [r(AAPH)R] of the treated group. 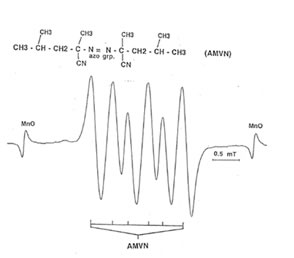 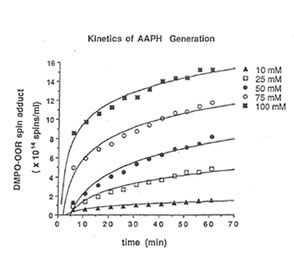 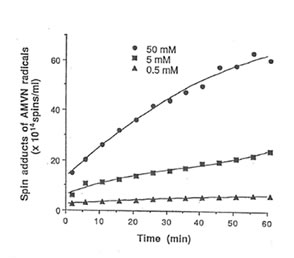 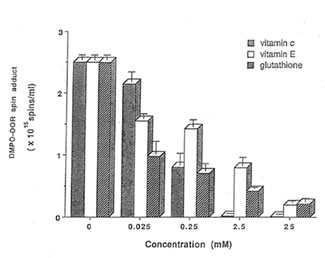 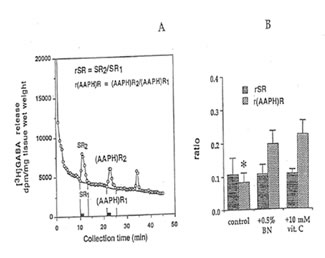 Table 1. IC50 of antioxidants required to scavenge 50% of the spin adducts of peroxyl radical generated from AAPH and AMVN in aqueous phase at 37°C.