(OR1) Age-related increases in methylguanidine: Inhibitory effect of Bio-catalyzer in aged rat brain

Running title: Inhibitory action of Bio-catalyzer- on methylguanidine during ageing

Oral administration of 0.1 g/kg body weight of Bio-catalyzer for 27 weeks on 89 week-old rats decreased significantly the elevated levels of MG and CRN in the brain – indicative of the antioxidant role of Bio-catalyzer in inhibiting hydroxyl radical­mediated synthesis of MG from CRN.

Methylguanidine (MG), a known potent uremic toxin1-2 is distributed, aside from kidney, in the rat heart3, erythrocyte3, intestine3, liver4, plasma3,4, and brains5-8. It is formed from creatinine (CRN) via reactive oxygen species (ROS) in particular the hydroxyl radical-generated Fenton reagents10,11. Free hemoglobin acting as a biological Fenton reagent12 and iron promoter forms hydroxyl radical. Since hydroxyl radical is implicated in various diseases and disorders, determination  of MG  as a marker of this radical could prove useful in studying the mechanism  of these free­ radical related diseases and disorders.

The hydroxyl radical has been used as a marker in uremic and hemodialyzed patients14, rat hepatocytes15 and brain16-18. High levels of methylguanidine have been demonstrated to induce convulsion in cats and rabbits19 and epileptic seizures in mice20. No data however is available on the formation of MG and its derivatives during the ageing   process. By high performance liquid chromatographic and fluorometrical analyses using the phenanthrenequinone (PQ) reaction 21,22, we determined MG and its precursor CRN9 and – guanidinoacetic acid (GAA) in adult and aged rat brain.

Bio-catalyzer, a commercial natural fermented health food supplement in Japan with proven scavenging action on free radicals and lipid peroxide in epileptic foci in rats23 indicative of its anti-epileptic property, increased the mitochondrial and cytosolic superoxide dismutase and decreased thiobarbituric acid-reactive substances in aged rat brain (unpublished report)  – suggesting its anti-ageing property. Since free radicals are normal metabolic products of oxidative stress, we studied their effects and the effect of oral administration of Bio-catalyzer on these vital guanidino compounds in the brain of aged rats.

Animals            Male Sprague-Dawley rats from Clea Japan Inc., (Tokyo, Japan) aged 12 and 89 weeks were used. Thirty five aged rats (89 week-old) were housed in individual aluminum cages for 27 weeks (including 1-week acclimatization) at 20- 26oC, at humidity of 40-70%, ventilation of 15-25 times/h, light of 150-160 lux for 12 h/day from 7:00 to 19:00, noise < 60 phon, ammonia of < 20 ppm, air stream of 25 cm/sec and were maintained under strict sanitary conditions.  The animals were allowed free access to water and a standard diet (CE-2 pellet supplied by Clea Japan, Inc., Tokyo). The rats were divided randomly into two groups; the control group consisting of 20 rats was orally administered with tap water boiled for 30 min while the second group of 15 rats was orally administered with 0.1 g/kg body weight (BW) of Bio-catalyzer for 27 consecutive weeks (189 days) at a volume dosage of 0.1 ml/100g animal weight. This dose approximates the recommended dose for humans which are 3-9 g/day. The administration was done from 14:00 to 17:00 after 2-3 h period of restricted food and water. The rats were sacrificed on the 27th week of Bio-catalyzer treatment by cervical decapitation and were immersed in dry ice, with the whole brain rapidly removed. The cortex was dissected on an ice plate24, frozen in liquid nitrogen and kept at 80°C until analysis.

Important guanidino compounds related to the synthesis of MG such as CRN and GAA including MG were processed (as shown in Fig. 1), identified in the brain cortex of adult rats, aged rats and Bio-catalyzer-treated aged rats. Figure 2 shows the typical HPLC chromatogram of different guanidino compounds in the brain of these three groups of animals and the authentic sample of guanidino standards. The chromatograms reveal 5 peaks corresponding to GAA, CRN, Arg, HArg, and MG which were eluted at about 2.0, 11.5, 16.5, 20.0, and 26 min, respectively. For this study however, only GAA, CRN and MG were quantified.(9ompared to the adult brain, MG ( p < 0.025), CRN ( p < 0.025) and GAA ( p< 0.001) were increased in the aged rat brain (Fig. 3,4 and 5). The elevated levels of CRN (p < 0.005) and MG (p < 0.025) but not GAA in the brain of aged rats however, were suppressed by the 27-week oral administration of 0.1 g/kg BW of Bio-catalyzer.

Reactive oxygen species (ROS) such as hydroxyl  radicals with their ability to react  with MG17,18 have  been used  as  markers in  the  serum  and  plasma  of hemodialyzed patients14 and in rat  hepatocytes15,16. The convulsive activity and epileptic seizures in cats and rabbits19 and mice20 and spike discharges in the rat encephalograms26 were attributed to increased level in MG. The synthesis of MG has been suggested to be mediated by ROS. ROS, in particular hydroxyl radicals, may be generated from free hemoglobin which acts as biological Fenton reagent12 or iron promoter of Fenton reaction13. The neurotoxicology of MG has been reported27 and has been implicated in brain dysfunctions, such as epilepsy28,29 but its effect on ageing has not been studied.          Most recently,              we found that while Bio-catalyzer increased the elevated levels of superoxide dismutase; it inhibited the elevated levels of thiobarbituric acid-reactive substances (TBARS) in aged rat brain (unpublished data). Augmenting these observations, our findings reveal that MG and its precursors CRN and GM were significantly increased in the brain of aged rats. Figure 6 shows the possible metabolic pathway for the synthesis of methylguanidine in the brain. MG, which is hydroxyl radical-mediated and is a peroxidative product of CRN12,13 and creatol30, increases with a increase in CRN – indicative of the active participation of hydroxyl radical during the ageing process31. CRN was synthesized from GAA, hence an increased GAA led to an increase in CRN. These age-related increases in MG and CRN but not in GAA were suppressed significantly by Bio-catlyzer at 0.1 g/kg body weight of the animals – a dose that approximates the recommended dose for humans. Bio-catalyzer, a proven scavenger of hydroxyl radicals and an inhibitor of TBARS in iron-induced lipid peroxidative damage in epileptic foci in rats23, is thought to have inhibited the hydroxyl radical-mediated peroxidative conversion of CRN to MG, thus decreasing the levels of MG and CRN in aged rat brain. The results also indicate that the synthesis of CRN from GAA does not involve hydroxyl radical intermediates.

The current findings add to the evidence that a precursor CRN to MG synthesis is mediated by hydroxyl radical.  MG may therefore be used as a marker radical formation in the brain and could prove useful in studying the mechanism of ageing and other brain dysfunctions believed to be caused by free radicals. The proposed metabolic pathway of CRN and MG in the brain may be similarly linked to that in liver and kidney in cases of acute and chronic renal failures 10.11.14-16,32. We speculate that Bio-catalyzer, a good inhibitor of hydroxyl radicals, may be an effective agent in arresting elevated levels of toxic convulsant MG in the brain of aged rats – indicative of its anti-convulsive and or anti-ageing properties. As an inhibitor of methylguanidine, Bio-catalyzer may also be a useful clinical agent in the amelioration of epilepsy, acute and chronic renal failure, among others.

Fig. 6.  Metabolic pathway of methylguanidine synthesis in the brain. 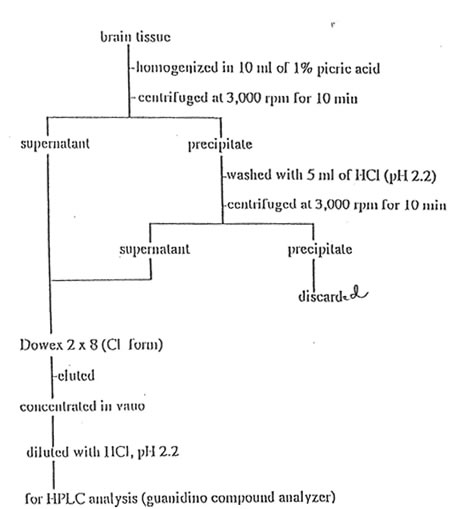 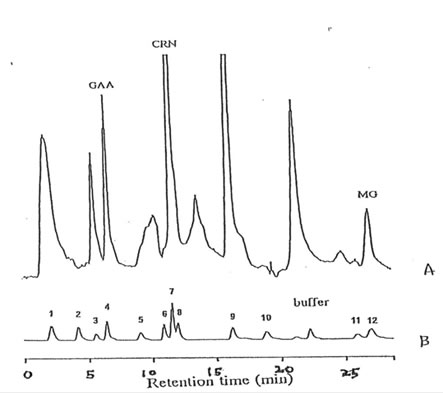 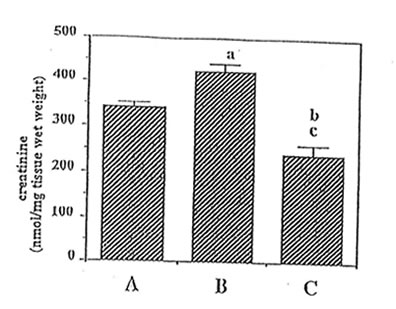 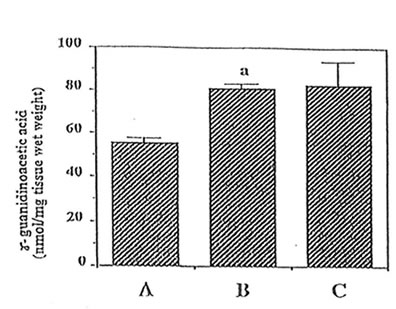 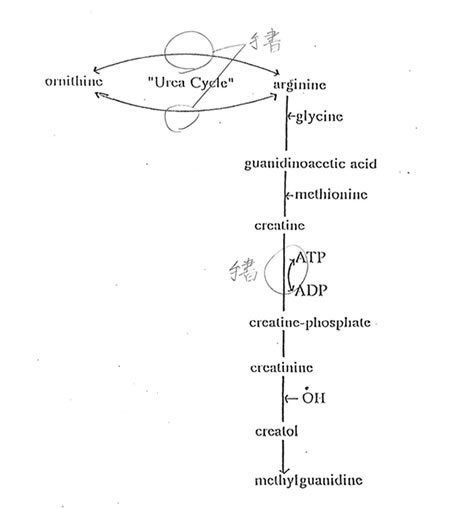