A separate study demonstrated that at a reduced concentration Bio-Normalizer can increase cell viability of normal human foreskin fibroblasts to more than 100%.

These findings suggest a potential cytotoxic activity for Bio-Normalizer against the carcinoma cells used.

its potential cytotoxic activity against human cancer cell lines was determined.  Human carcinoma cell lines are useful models for in vitro assessment of potential cell killing effects of commercial drugs or natural products.  Epithelial cells are of particular interest because most adult human cancers are carcinomas [1].

Bio-catalyzer a.r No. 11 (Bio-Normalizer), a commercial natural fermented health food supplement marketed in Japan and in the Philippines, has proven scavenging action on free radicals [2] and was found to increase superoxide dismutase activity in the brain of aged rodents as a defense mechanism against age-related accumulation of superoxide radicals [3].  Recently, it was observed to enhance gamma interferon in the body [4], advocating its significant role in the obstruction of diseases.  Its antigenotoxic potential against known mutagens and carcinogens like dimethylnitrosoamine and cyclophosphamide (in vivo) has been established [5].

The use of Bio-Normalizer was observed to have improved various medical cases usually medicated by free radicals.  Free radicals damage biomolecules like proteins and DNA, causing diseases such as cancer [6], cardiovascular diseases [7] and brain dysfunctions [8].  Radiation-induced carcinogenesis may be initiated by free radicals [9].  Free radical intermediates, in turn, damage DNA.  Base hydroxylation and strand breaks occur resulting in a fall in ATP levels and death of the cell.  In surviving cells, mutation takes place leading to malignant transformation as evident in naturally occurring human cancers of the colon, pancreas and lung [10, 11].  Cancer is characterized by an increase in the number of abnormal cells, their invasion of adjacent tissues, and lymphatic spread of malignant cells to distant sites [12].

Bio-Normalizer (Sun-O International, Inc., Gifu, Japan) was dissolved in phosphate buffered saline (PBS) with concentrations ranging from 20 to 100 mg/mL while the positive control, vincristine sulfate (Pharmachemie B. V., Haarlem, Holland) was obtained as formulated for clinical use and reconstituted with PBS to attain a 100 mg/mL stock solution.  These solutions were prepared freshly for each experiment and finally passed through a 0.22 mm sterile filter prior to use.  Trypsin and RPMI 1640 supplemented with 0.03% L-glutamine and 0.20% sodium bicarbonate were purchased from Sigma Chemical Co. (St. Louis MO., USA).

A modification of the quantitative colorimetric assay for mammalian cell survival and cell proliferation by Mossman [13] using 3-(4,5-dimethylthazol-2-yl)-2,5-dyphenyl tetrazolium bromide (MTT) was adopted in this study.

In the preliminary experiments done, the optimal seeding density required for each cell line to be in the log phase when the assay was terminated 4 days after plating was determined to be 10,000 cell per well.  To the overnight cultures of cells, Bio-Normalizer (20 – 100 mg/mL), vincristine sulfate (20 mg/mL), an equivalent amount of PBS were added.  Each concentration point for the test compounds was representative of 4 – 8 multiplicate wells for each cell line.  The cells were incubated at 37°C for 4 days and then 125 mg MTT (5 mg/mL stock solution) was added to each well.  For the solubilization of the formazan crystals, modification by M. B. Hansen, et al [14] was followed.  One hundred microliter of solubilizing solution (20% sodium dodecyl sulfate in 50% dimethylformamide. pH 7.4) was added to each well and incubated overnight at 37°C.  The absorbance of each well was measured manually at 570 nm using Photometer 4010 (Boehringer Mannheim, Germany).

Response curves were plotted, with the IC50  values for each cell line determined graphically as the dose of Bio-Normalizer causing a 50% reduction in the absorbance of the control values.

The results obtained were analyzed by the Student’s t-test using the statistical significance at the 0.05 probability level.

Results showed significant differences in the effects of Bio-Normalizer on the four cell lines (p<0.05).  The IC50 value of Bio-Normalizer for HEp-2 was calculated to be 40 mg/mL; 60 mg/mL for A 549 and 64 mg/mL for SLNI-52A.  The IC50 for HeLa was found to be highest at 92 mg/mL.  The cell killing effect of Bio-Normalizer on A 549 and SLNI-52 was observed to be comparable to the activity of vincristine sulfate at 20 mg/mL (p>0.05) while the solvent used to dissolve the test compounds did not have cytotoxic effects on the four cell lines used (Figure 1).

Microscopic observations showed that long exposure of the cancer cells to Bio-Normalizer (4 days prior to assay) lead to intracellular granulations, disintegration of the cell membrane, and inability of the cells to adhere to the substratum and proliferate.

In a separate study, it was found out that at 10-55 mg/mL and 100 mg/mL Bio-Normalizer, cell viability of the normal human foreskin fibroblasts (HFF) was more than 100% and 70%, respectively.  It starts killing HFF at 58 mg/mL.

The uncontrolled growth of some neoplastic cells can be attributed to the concept of autocrine production of growth factors. [1]. Ectopic hormones like bombesin and human chorionic gonadotropin produced by carcinomas are examples of autocrine growth factors.  These hormones enhance the growth of epithelial cells in vitro by binding to specific membrane receptors and elicit cascades of reactions leading to cell growth and differentiation.  Bio-Normalizer could have inhibited the affinity of these hormones to the membrane receptors, thereby, inducing irreversible inhibition of DNA and membrane protein synthesis.

In previous in vivo study, it has been shown that Bio-Normalizer inhibits the toxohormone-L induced lypolysis [16] and increases significantly the natural killer cell activities of tumor bearing mice [17].  Natural killer cells were able to recognize and lyze a wide variety of tumor cells without prior sensitization.  It has also been demonstrated that Bio-Normalizer exhibits therapeutic actions on several pathological conditions such as tumors, immunodeficiency, and allergy, among others [18, 19].

Antioxidants are found to be anticarcinogenic, thereby, protecting the cells against oxidative damage [6].  Bio-Normalizer contains antioxidants such as baker’s yeast [20-22] and Carica papaya Linn. [21]. Papaya, its major component, was also proven to have antimicrobial and antioxidant properties [23] supplementing its therapeutic activity on several cancer growths [24].  Other antioxidative components in Bio-Normalizer include glutathione, hydroxyl-, thiol-and sulfur-containing amino acids and trace amounts of SOD, catalase and peroxidase [25].

In conclusion, Bio-Normalizer as a nutritional supplement carries the promise of being a potential anti-tumor agent.  Its mechanism of action on cancer cells have to be studied in more detail. 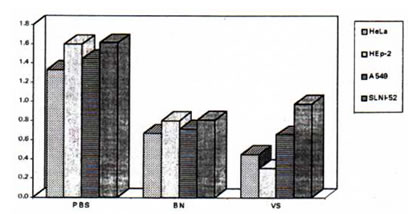 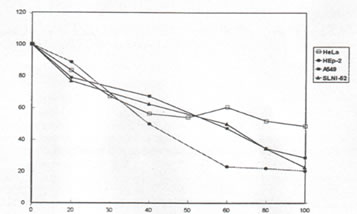