Bio-normalyzer®: An anti-cancer drug for neuroblastoma?

Iron is an essential micronutrient required for cell division and growth. Incorporation of iron into cells is achieved by endocytosis of transferrin. Then, iron may be stored in ferritin and hemosiderin. Increased intracellular iron concentrations may promote malignant cell growth. Patients with advanced-stage neuroblastoma (NB) show abnormally high levels of serum ferritin, very likely synthesized and secreted by the tumor in vivo and consistent with a frequent accumulation of iron in ferritin in NB tumor tissues. In a previous study, we showed that there is no iron accumulation in cultured neuroblasts, and intracellular iron concentrations proved to be especially low. Bio-Normalizere® (BioN) is a nutritional supplement sold to be an anti-oxidant and metal-chelator. In the present study, we tested cell viability and measured iron concentrations in neuroblasts treated or not with BioN. We found that BioN, probably thanks to papain, presents an anti-proliferative effect on NB cultured cells. Besides, preliminary results tend to prove that this natural anti-oxidant and iron-chelator could present interesting effects on trace metal concentrations in neuroblasls. Such a compound may be useful in treatment of this pathology. ©2001 Elsevier Science B.V. All rights reserved.

During energetic metabolism, cells produce many unstable free radicals, which may lead to tissue deterioration, metabolic disturbance and DNA damage. Among them, we can mention superoxide radicals or hydroxyl radicals, known to be the most reactive species, which can be produced by the interaction of hydrogen peroxide with iron. Anti-oxidants have proved to prevent oxidation caused by free radicals, just as well in vitro as in vivo. Abilities of Bio-Normalizer® (BioN) to lessen free radical damage and to regulate the production of superoxide radicals confer it properties of an anti-oxidant [1].

BioN is developed by fermentation of tropical fruits containing papain from Carica papaya. It is the first natural functional health food able to control free radicals by scavenging hydroxyl radicals and decreasing lipid peroxidation. BioN has been found to possess properties of iron-chelation [2] and has demonstrated interesting properties of cytotoxic activity against cancer cells in culture. It could display potential effects as an anti-cancer drug [3].

As for all cancers, neuroblastoma (NB) development leads to an oxidative stress, which can be the source of free radicals synthesis. Many works showed that iron metabolism is disturbed in NB patients [4,5]. In a previous study, we showed that NB cultured cells present empty stocks of iron in ferritin, the main iron-storage protein: iron detected in these cells may then be under the ionic form and induce free radicals synthesis [6]. Several anti-oxidants have proved to have an anti-proliferative effect on NB cultured cells [7]. Desferrioxamine, an iron-chelator, leads to a significant decrease in the growth rate of human NB cells [8]. Papain, one of the main constituents of BioN, is a proteolytic enzyme able to digest transferrin on the cell surface. Papain prevents entering of iron into cultured cells by limiting endocytosis of ironbound transferrin [9]. All these data suggest a potential effect of BioN, acting as an anti-oxidant and iron-chelator, on NB cultured cells. In this study, the anti-proliferative effect of BioN and papain was tested on neuroblasts in vitro. The role of BioN on intracellular iron contents in NB cultured cells was studied by nuclear microprobe analyses. In several experiments, iron citrate was added to the culture medium in order to increase intracellular iron concentrations within cells and to better understand the chelation properties of BioN.

SK-N-SH [10] and IGR-N-91 [II] NB cells were grown at 37°C with 8% CO2 in DMEM at 4.5 g/l D-glucose, supplemented with 10% fetal calf serum and antibiotics. At confluence, cells were subcultured with trypsine/EDT A 0.05% in four or five new culture flasks. Cell viability was assessed by the Trypan blue exclusion test. BioN, gracefully supplied by Osato Research Institute, papain or dextrose were freshly prepared for each experiment. They were added to cultures one day after seeding to ensure uniform attachment of the cells at the onset of the experiments.

Targets were prepared as already described elsewhere [12]. Briefly, a cell suspension was seeded onto a very thin sterile Formvar® film precoated with attachment factors. In the course of 48 h of incubation, a monolayer of tumor cells developed on the polymer film. At the exponential growth phase, the targets were rapidly rinsed in Earl’s salt solution and water and rapidly frozen in liquid isopentane chilled at about -165°C by liquid nitrogen. After cryofixation, lyophilisation was achieved in 2 h at -80°C under vacuum.

Monolayers of SK-N-SH or IGR-N-91 cells were bombarded with a 2.5 MeV proton beam of a few micrometers diameter from the Bordeaux CENG facility. High speed scanning (1 ms/point) and beam currents of the order of 0.8 nA were used, in order not to alter the sample [13]. Large area scans (800 x 800 µm2) were performed: simultaneous analysis of several thousands of cells allowed determination of mean concentrations representative of each cell line.

Each acquisition was going on for several hours. A 240 µm carbon absorber was inserted in front of the detector to absorb low-energy X-rays and to detect heavy-Z elements. X-ray spectra were analyzed by the Gupix program. Elemental concentrations (Fe, Cu and Zn) were deduced from the X-ray intensities and normalized to the total mass of the sample, simultaneously determined from the backscattered spectra. RBS spectra were simulated using the RUMPIN code, taking into account the local thickness distribution of the monolayer [14]. 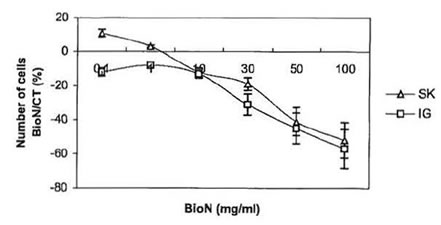 Fig. 1 . Anti-proliferative effect of BioN on SK-N-SH and IGRN- 91 NB cell lines: variation of the number of living cells in dishes cultivated with BioN compared to controls (%) as a function of BioN concentration in culture medium (mg/ml).

Tests of viability, where cells from both NB SK-N-SH and IGR-N-91 cell lines were cultivated in presence of 0.1 – 100 mg/ml BioN were carried out. Tumor cells killing as a function of BioN concentration is presented in Fig. 1. For the same number of cells seeded in culture flasks, incubation with BioN significantly slowed down growth of NB cells compared to controls (cells cultivated without BioN). On the contrary, at concentrations between 0.1-1 mg/ml, BioN speeded up the proliferation of SK-N-SH cells. This phenomenon has already been observed with other cell types [15].

To further investigate the anti-proliferative effect of BioN on NB cultured cells, we studied the influence of dextrose and papain, the two main constituents of BioN, on their growth [16]. Dextrose, which represents around 98% by weight of BioN, was directly added to the culture medium. Results are presented in Fig. 2. At concentrations ranging from 0.1 to 50 mg/ml, dextrose only presented a weak dose-dependent anti-proliferative effect on neuroblasts. At 100 mg/ml, dextrose became toxic for the cells. In other experiments, papain has been added to the culture medium. At high concentration, we observed that papain unstuck NB cells growing as monolayers in the bottom of culture flasks. When transferred in a new culture flask with papain-free culture medium, cells were able to adhere and proliferate again. At concentrations ranging from 1 to 50 mg/ml, papain played the same role as BioN, if considering that BioN contains 1% by weight of papain. 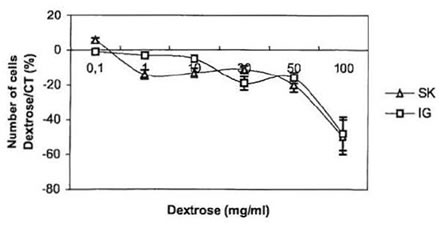 Fig. 2. Anti-proliferative effect of dextrose on SK-N-SH and IGR-N-91 NB cell lines: variation of the number of living cells in dishes cultivated with dextrose compared to controls (%) as a function of dextrose concentration in culture medium (mg/ml).

collagenase. As such, papain presents digestive properties, which permit it to detach cells from the culture flask. Anti-oxidants have found to be anti-carcinogenic, by protecting the cells against oxidative damage. Papaya, the major component of BioN, was also proven to present anti-oxidant properties. It was already shown that iron chelators, such as desferrioxamine, might be useful anti-tumor agents thanks to their anti-proliferative effect on NB cells [17]. Thus, BioN, may be thanks to papain, may be a potential anti-tumor agent, which mechanisms of action on cancer cells have to be further investigated.

3.2. Influence of BioN on Fe, Cu and Zn concentrations in NB cultured cells

In order to better understand the mechanism of action of BioN on iron contents within neuroblasts, we compared trace metal concentrations in NB cells cultured or not with this agent. Nuclear microprobe analyses allowed us to determine Fe Cu and Zn concentrations in monolayers of SK-N-SH and IGR-N-91 cells. Considering our results of the anti-proliferative assays previously carried out, concentrations of 10 and 50 mg/ml of BioN in the culture medium have been chosen for this study. In a previous study, we showed that intracellular iron concentrations are low in NB cultured cells and that there is no iron-stock in ferritin of cultured

neuroblasts. In order to check that BioN is able to chelate it, we added iron in the growth medium of SK-N-SH cells. 50 µM iron citrate, well assimilated by cells was added to the growth medium.

Interesting differences in intracellular trace metal concentrations in neuroblasts treated or not with BioN and iron citrate could be established (Table 1). We noticed that when adding 50 µM iron citrate to the culture medium of SK-N-SH cells, intracellular copper and zinc concentrations were not modified but intracellular iron concentrations were multiplied by a factor 3. NB cells are able to incorporate high contents of iron. Other authors have already established that tumor cells, and especially neuroblasts, can accumulate iron in ferritin and hemosiderin when exposed to an iron-enriched medium [18].

Without adding iron excess in the growth medium, BioN did not seem to influence intracellular iron rates in tumor cells, but when adding iron to the culture medium, iron rates diminished by a factor 2 when exposed to BioN. After incubation with exogenous iron, SK-N-SH cells accumulate iron, which is probably chelated by BioN. Raised serum ferritin, as well as accumulation of iron-rich ferritin in tumor tissues are adverse prognosis factors for NB. Iron is known to be necessary for cellular proliferation. The fact that ferritin can be produced by NB cells raises the possibility that iron may have some role in promoting tumor cell growth. Numerous reports have also indicated that NB cells are especially sensitive to growth inhibition by a specific iron chelator in vitro [5]. Iron chelators possess high activity to mobilize Fe from neoplastic cells. By that way, they may be useful agents to treat cancer, especially NB. Desferrioxamine has recently been used for the treatment of patients suffering from NB. Nevertheless, high doses of anti-oxidant compounds are generally required to obtain cytostatic activity in vitro, and cause toxic effects in vivo [19]. The search for natural anti-oxidants with low toxicity and high free radical scavenging activity is of critical interest. BioN was demonstrated to increase cell viability of normal human fibroblasts in vitro [15]. BioN, as natural anti-oxidant and iron-chelator, could present double advantages as an anticancer drug and against genotoxic agents.

Copper and zinc concentrations were significantly decreased after incubation with high concentrations of BioN. Oxidative stress increases intracellular Cu, Zn superoxide dismutase content in human NB cells [20]. A treatment with BioN could lead to a decrease in this SOD enzyme, which could explain the decrease in Cu and Zn contents in neuroblasts treated with BioN alone, or with iron plus BioN.

Elemental concentrations in SK-N-SH and IGR-N-91 NB cultured cells (mean values and SD of n and m values, respectively, in µg/g dry weight of cells) as measured by NMPA after incubation with BioN and iron citrate compared to controls

The work presented here constitutes an example of application of nuclear microprobe analysis to research on anti-cancer drugs: it allowed the analysis of tumor cells monolayers cultured or not with an anti-proliferative agent, the BioN. Preliminary results discussed in this paper prove that BioN may be useful in treatment of NB. BioN present an anti-proliferative effect on NB cultured cells and after incubation with exogenous iron, NB cells accumulate iron which should be chelated by BioN. To further investigate the mechanisms of action of BioN as natural anti-oxidant and ironchelator, this study could be completed by analysis of the simultaneous effects of BioN and an antitumor agent used in the treatment of NB presenting a cytotoxicity which could be reduced by the presence of this agent.

The authors thank Osato Research Institute for supporting the research on BioN.