4            Since methylation of the 1-position of each 3-alkylxanthine increased the potency of the derivative in inhibiting low Km cyclic AMP PDE and in relaxing trachealis muscle and since a strong positive correlation was observed between the relaxant EC50 and the Ki value of each xanthine derivative, it is suggested that low Km cyclic AMP PDE inhibition by xanthines plays an important role in their tracheal relaxant effect.

However, the pharmacological actions of xanthine agents have not been fully clarified by any of these studies for the following three reasons: (1) In the first three studies, the concentration of the xanthine inhibiting PDE or antagonizing adenosine did not correlate with the concentration effective in causing relaxation. (2) Xanthine agents are strong smooth muscle relaxants even where the maintenance of muscle tone is independent of prostaglandin synthesis. (3) Whether or not xanthine agents directly influence the release of catecholamines from the adrenal medulla remains uncertain. It has recently been reported that bronchodilators such as agonists at β-adrenoceptors, xanthine agents and dibutyryl cyclic AMP induce hyperpolarization of the cell membranes in guinea-pig isolated trachealis muscle with a muscle relaxant effect (Honda et al., 1986). β-Adrenoceptor stimulants and xanthine agents tested in combination acted to relax the isolated trachealis muscle in guinea-pigs (Persson & Gustafsson, 1986). Also recently, a significant relationship was found between PDE inhibition and trachealis muscle relaxation although there was no obvious correlation between the increase in intracellular cyclic nucleotides and trachealis muscle relaxation (Bryson & Rodger, 1987).

Therefore, the cyclic nucleotide PDE system is once again receiving attention. We compared the cyclic AMP PDE inhibitory effect of various xanthine derivatives with the myorelaxant effect of these derivatives on tracheal preparations obtained from guinea-pigs, in order to clarify how the trachealis muscle relaxant effect of xanthine agents correlates with PDE inhibition. We also investigated the changes in tracheal relaxant potency and PDE inhibitory potency which resulted from methylation of the 1-position of 3-alkylxanthines. 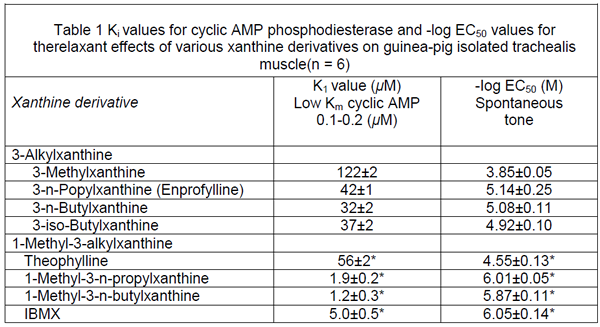 K1 values were determined by the method of Dixon (1953), and the EC50 values were calculated from log · probit plots of the individual relaxation responses.

All data are presented as mean ± s.e.mean.

Male Hartley guinea-pigs weighing 200-400 g were stunned and bled, and the trachea was removed. One tracheal ring was cut from the pharyngeal end of each trachea. The ring was opened by cutting through the cartilaginous region diametrically opposite the trachealis muscle, and the ends of the cartilaginous region were ligated. The preparation was placed in an organ bath of 1ml volume. Tension was measured with an isometric transducer (Minebea Co., L td, UL 10GR), and tension changes were recorded with a pen recorder (Matsushita Communication Industrial Co., Ltd, VP-6621A). Using the method of Baba et al. (1985), the preparation was perfused at a constant flow of 1.5 ml min-1 at 37°C in Krebs solution of the following composition (mM): NaCl 137, KHCO3 5.9, CaCl2 2.4, MgCI2 1.2, and glucose 11.8. Isoprenaline (2 x 10-5 M) was added to produce complete relaxation, then tension of about 0.5g was applied to the preparation. The preparation was again perfused at 37°C in Krebs solution and spontaneous tone was allowed to develop. After the tension had stabilized, the preparation was then perfused for 20 min in the presence of a xanthine derivative at various concentrations. Relaxation occurring on exposure of the tissue to a Ca2+ -free medium containing 0.01 mM EGTA was defined as 100%, and the relaxation caused by each xanthine was calculated in terms of this standard.

Cyclic AMP PDE activity was measured by a method similar to that devised by Thompson & Appleman (1971). Trachealis muscle was homogenized in Tris HCI buffer (40mM Tris HCI, 10mM MgCI2 and 4mM 2-mercaptoethanol). The homogenate was cooled and centrifuged at 10,000g in a refrigerated centrifuge. The supernatant fluid was collected. A mixture consisting of 50μI of the test xanthine solution or vehicle solution, 25μI of cyclic AMP (1 x 10-7-4 x 10-5 M) and 25μI of [3H]-cyclic AMP (1 mCi ml–1) was placed in a glass test tube incubated at 30°C for 5 min; 100μl of the supernatant solution from the tissue homogenate was added and the mixture was incubated at 30°C for 10 min. The reaction mixture was placed in boiling water for 1m in to stop the reaction. After the mixture had been cooled with water, 50 μI of Crotalus atrox snake venom solution was added and the mixture was incubated at 30°C for 10min. Following that, an ion exchange resin (Dowex 1-X2) was added, and the mixture was allowed to stand for 15 min. The mixture was centrifuged at 3,000 r.p.m. for 5 min in a bench centrifuge. The supernatant solution was collected. The radioactivity in 0.5 ml of the supernatant was measured with a liquid scintillation counter. The Km value and the Vmax value were obtained from Lineweaver-Burk plots. Since diphasic graphs are observed for guinea-pig trachealis muscle, a high Km enzyme value and a low Km enzyme value can be obtained. The Ki value was obtained by the method of Dixon (1953).

All the results are expressed as the mean ± s.e.mean, and the t test without correspondence was applied. P values less than or equal to 0.05 were considered to indicate a significant difference between means.

Table 1 shows the -log EC50 values for the trachealis muscle in the condition of spontaneous tone while Figure 1 shows the concentration-response curves for 1-methyl-3-alkylxanthinesand the corresponding 3-alkylxanthines for trachealis in spontaneous tone. These results reveal that relaxant potency of xanthine derivatives is increased both when a 3-methyl substituent is replaced by a longer 3-alkyl chain and when a 3-alkyl derivative is additionally methylated in the 1-position. 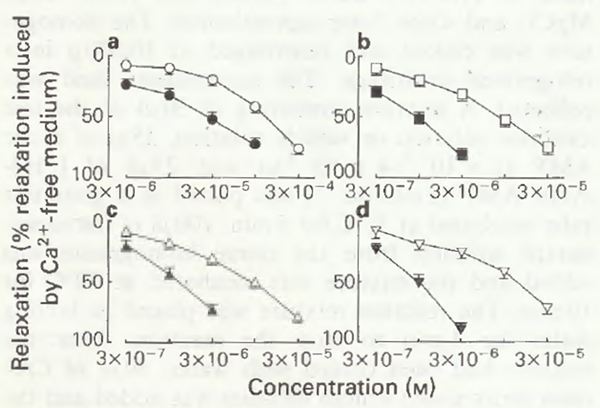 For guinea-pig tracheal smooth muscle, low (high affinity) and high (low affinity) Km cyclic AMP PDE activities were observed. Examination of the Ki values of individual xanthine derivatives revealed that for the low Km enzyme, inhibitory potency of the xanthines is increased both when a 3-methyl substituent is replaced by a longer 3-alkyl chain and when a 3-alkyl derivative is additionally methylated in the 1-position (Table 1).

Studies by Persson et al. (1982) revealed that alkyl substitution in the 1-position of the xanthine nucIeus yielded a xanthine with adenosine antagonist activity. This observation stimulated active discussion on the relationship between the bronchodilator action and adenosine-antagonizing action of xanthines. However, theophylline and related substituted methylxanthines such as IBMX, 8-phenyltheo-phylline, caffeine, and theobromine are effective inhibitors of adenosine at A1-and A2-purinoceptors in concentrations between 20 and 100 times lower than those required to inhibit phosphodiesterase (Fredholm & Persson, 1982). Furthermore, enprofylline, which has been shown to be almost entirely free of antagonism of the functional and biochemical effects of adenosine, has a greater bronchodilator potency than some xanthines alkylated in the 1-position (Lunelle,. et al 1982., Persson, 1983). We have therefore come to believe that the adenosineantagonizing action of xanthine does not represent the main mechanism of its bronchodilator effect.

A number of studies have also been conducted on the mechanism by which the PDE inhibitory action of xanthine and the related increase in intracellular cycIic AMP concentration may lead to the relaxation of trachealis muscle. Doubt has been cast on the operation of this mechanism by observation of a difference between the effective blood concentration of theophylline and its PDE inhibitory activity in the isolated airway (Polson et al., 1978; Bergstrand, 1980). Furthermore, drugs such as papaverine and dipyridamole, which are strong PDE inhibitors, are not effective as bronchodilators in vivo (Ruffin & Newhouse, 1981).

However, inconsideration of a recent finding that there was a supra-additive interaction between terbutaline and both theophylline and enprofylline, which are PDE inhibitors (Persson & Gustafsson, 1986), and also of a recent report that PDE inhibitors such as papaverine, IBMX, SKF 94120, etc., showed a strong relaxant effect on guinea-pig isolated trachealis muscle (Bryson & Rodger, 1987), a strong correlation seems to be suggested between the PDE inhibitory action and the bronchodilator action of xanthine. Furthermore, a significant correlation has been observed between the in vitro PDE inhibitory activity and the bronchodilator potency of xanthine (Newman et al., 1978; Polson et al., 19 82).

We conducted experiments with 2 main objectives: one was to look for a possible structure-activity relationship by comparing the 3-alkylxanthine derivatives with their corresponding 1-methyl-3-alkylxanthine-analogues in terms of their cyclic AMP PDE inhibitory action and their relaxant effect on guinea-pig isolated trachealis. The 1-methyl-3alkyl derivatives were more potent in inhibiting high affinity cyclic AMP PDE than their 3-alkylanalogues and similar potency differences were obtained for relaxation 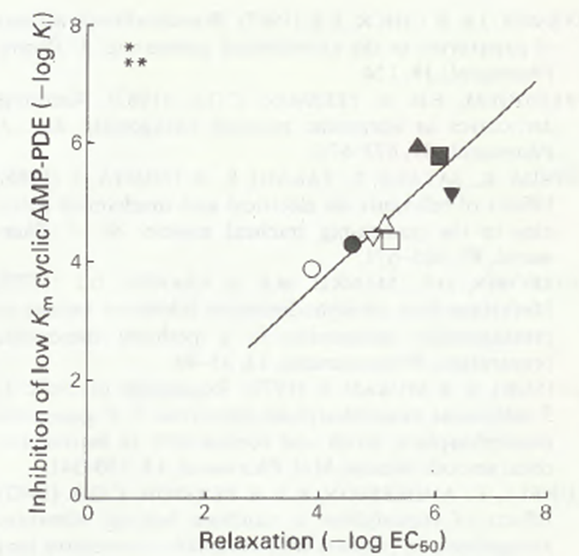 of trachealis muscle. Furthermore, in both groups of analogues, an increase in the size of the 3-alkyl substituent from methyl to n-butyl increased potency as regards both enzyme inhibition and tracheal relaxation. A structure-activity relationship thus became obvious; that is, 1-methylation and a longer 3-alkyl chain not only elevate high affinity cyclic AMP PDE inhibitory potency, but also increase potency for relaxation of trachealis muscle. These findings usefully supplement the structure-activity relationship for the adenosine-antagonizing action of xanthines reported by Persson et al. (1982). There are reports that alkylation of the 1-and 3- position increases tracheal relaxant potency and that, within limits, an increase in the size of the 3-alkyl analogues also increases bronchodilator potency (Parker et al., 1956; Persson et al. 1985; Takagi et al., 1988). For tracheal smooth muscle, cyclic AMP PDE activity is of 2 types, i.e., low Km (high-affinity) and high Km (low-affinity). The tissue concentration of cyclic AMP is normally no greater than 1μM. Therefore the high affinity enzyme of Km; 0.61±0.04μM is considered to be the isozyme of greatest physiological importance.

For xanthine-induced inhibition of the low Km enzyme, we found a clear, strong correlation with the relaxant effect on trachealis muscle (r = 0.916, P<0.01)(Figure 2). This was the other main objective of our experiments. Polson et al. (1982) examined cyclic AMP PDE activity in canine trachea and detected high-affinity cyclic AMP PDE activity (peak V), the Km of which was 0.63±0.09μM. They reported that, for 6 different methylxanthines (1- methylxanthine, 3-methylxanthine, 7-methylxanthine, caffeine, theophylline and IBMX) a strong correlation existed between xanthine-induced inhibition of high-affinity cyclic AMP PDE and of isolated canine trachealis muscle contracted by means of methacholine. Despite the different animal species used, the results of the present study are therefore consistent with those of earlier studies.

On the basis of all the above results, it can be concluded that in the guinea-pig the low Km cyclic AMP PDE inhibitory activity of xanthine derivatives is closely related to their tracheal relaxant activities in vitro.