It has been shown that exposure to asbestos fibers leads to increasing risk of various malignancies (bronchogenic carcinoma, mesothelioma, and gastrointestinal tumors), the development of  interstitial fibrosis (asbestosis)  and  unspecific inflammation in the lung tissue (alvcolitis) [1,2]. We [3] and others [4] have previously shown that asbestos fibers stimulate oxygen radical production by phagocytes (neutrophils and macrophages). It is likely that the release of reactive oxygen species (ROS) by phagocytes is the predominant way by which ROS are involved in an inflammatory process and fibrogenesis [5,6]. On these grounds we suggested that the study of the effects of BN administration to experimental animals with lung injury induced by asbestos fibers may be an important test of BN anti-inflammatory and antifibrotic activities.

Alveolar macrophages and neutrophils were prepared by pulmonary lavage using the slightly modificated method [7]. Briefly, animals were sacrificed by intraperitoneal injection of sodium thiopental, 50 mg/kg. The trachea was cannulated and the lungs were lavaged five times with 10 ml of HBSS, pH 7.4, at 37°C. The lavage fluid was filtered through a nylon cloth. The filtrate was centrifuged at 300xg for 10 min. Cell content was determined in a hemocytometer and differential count was performed microscopically in the cell smears. To separate mononuclear and polymorphonuclear cells, cell pellet was resuspended in 1 ml of HBSS, layered carefully on Ficoll-Paque gradient (ρ = 1.077   kg/l), and centrifuged at 600xg for 40 min. The upper layer consisted of mononuclear cells (macrophages and lymphocytes) and the pellet contained granulocytes (mainly neutrophils). Macrophages were identified   by staining for nonspecifice sterase. Macrophage and neutrophil preparations were >95% pure and 98% of the cells excluded trypan blue. The isolated cells were resuspended and stored at 4°C in HBSS supplied with 5% fetal calf serum.

After broncho-alveolar lavage preparation, the lungs were removed, weighted, and part of them was used for hydroxyproline and lipid peroxidation determination. The remaining tissue was dried and weighted again for the wet/dry weight ratio determination.

The lung tissue was dissected into small pieces, poured through 3mm holes for the fibrotic wall separation, and homogenized thoroughly. 10 mg of homogenate sample were incubated with 50 μΜ FeCI3 and 800 μΜ ADP in 1 ml of 0.1 M phosphate buffer (pH7.4) at 37°C. The reaction was started by adding 40 μl of 7.5 mM NADPH in phosphate buffer.  After 30 min incubation, the reaction was stopped by adding 1 ml of 15% trichloroacetic acid and 0.1 m1 of 10 μM   naphtol solution in ethanol.   Then, 1 ml of 0.375% TBA solution was added, and reaction mixture was boiled for 15 min.  After sedimentation of precipitated proteins by centrifugation, the content of TBA reactive products was determined by measuring the absorbance at 535 nm.

CL measurements in a Luminometer mod. 1251 (LKB, Sweden) were monitored at 37° and continuous mixing on a programmed IBM computer.  All experiments were carried out in duplicates. Each point was a mean of 3 or 4 independent measurements.

A sample of 5×105 cells, 400 μM luminol or lucigenin, and 0.5 ml of HBSS pH 7.4 were placed 1-ml polysterene vials. The vial was then placed in the thermostated detection chamber of a luminometer. After measurement of background for 5 min, CL was activated by introducing of PMA (10 ng) or opsonized zymosan (100 ml). The CL – response was measured as a mean mV signal over 10-s intervals for a 10-min period. Amplitude of the CL-response was defined as a difference between maximal intensity of activated CL and intensity of spontaneous CL and expressed as m V/ 106 cells.

The determination of hydroxyproline in rat lung tissue

The hydroxyproline content was measured by slightly modified method of stegemann [8]. In short,  a sample of dried lung  tissue (20 mg)  was hydrolized  with 6 M   hydrochloric acid (1 ml) at  100°C for 24 hours. After filtration, neutralization, and vaporization of water, dry residue was dissolved in 1 ml of distilled water. A sample was incubated with 1 ml of 0.03 M chloroamine B solution prepared in the mixture of acetate-citrate buffer + propyl alcohol for 5 min at room temperature. Finally, the reaction mixture was treated with 1 m1 of 5% p-dmethylaminebenzaldehyde at 60°C for 20 min and the content of hydroxyproline was determined spectrophotometrically at 558 nm.

All data are present as mean  ± SEM Data  were analyzed  by analysis of variance  followed by paired or  unpaired t-test  for  multiple group  comparison. A P value less than 0.05 was significant.

In present work we have studied the in vivo effects of BN on the lung inflammation and fibrosis induced by chrysotile asbestos exposure. We compared some objective symptomes of  lung injury  in  the rats  with  and  without BN  administration; in  addition,   the specific parameters characterized the rat organism’s free radical status, namely, lipid peroxidation in the  lung tissue and oxygen radical production by the pulmonary cells were  determined. It was found that BN administration diminished the pathologic changes in the rat lungs induced by asbestos fibers instillation. Thus, wet lung weight and the lung weight/rat weight ratio decreased in the asbestos-injected rats under BN administration (Group 2 and 3) in comparison with those for Group 4 and approached the parameters of control animals (Group 1) on 14th and 28th days ( Figs 1 and 2).

Furthermore administration to asbestos injected rats decreased recovery of Neutrophils into broncho-alveolar space (Fig. 3) and enhanced that of macrophages (Fig4). These processes (the suppression of neutrophil attachment to immflamatory loci and the enhancement of macrophage recruitment and their phagocytic capacity) apparently determine the beneficial effects of BN on aseptic inflammation. It seems of utmost importance that similar effect of BN has been already shown by us in the in the inflammation model induced by intraperitoneal dextran injection [9]. Therefore one may conclude that the suppression of neutrophil-defined stage and the stimulation of macrophage stage of inflammation can explain an universal normalizing effect of BN in a variety of inflammatory pathologies.

At the same time, BN did not affect lung vascular permeability which was usually enhanced during inflammatory process. As is seen from Fig.5 BN administration did not change significantly lung edema defined by the wet/dry lung weight ratio. It is now well established that lung inflammation often precedes the development of lung fibrosis [5,6]. The amount of hydroxyproline in the lung tissue corresponds to the intensity of asbestos-associated fibrosis. We found that BN administration drastically decreased hydroxyproline formation on 28th day after asbestos exposure [Fig. 6].

BN exhibited profound inhibitory action on free radical formation in lung tissue. We studied two free radical processes in the lung: lipid peroxidation in the lung tissue and the release of oxygen radicals by pulmonary phagocytozing cells. As is seen from Fig.7, BN administration to asbestos-injected rats completely annihilated the asbestos-induced enhancement of lipid peroxidation in the lung homogenate on 28th day after the beginning of experiment. At the same time, the BN effect on oxygen radical production by lung phagocytes was much more complicated. On a whole, as it should be expected, BN administration decreased spontaneous and PMA- or zymosan-stimulated luminol- and lucigenin-amplified CL produced by the cells of bronchoalveolar lavage from asbestos-injected rats, although this inhibitory effect was not so prominent as in the case of dextran associated inflammation [9]. On the other hand, BN was found to be a very effective inhibitor of hydroxyl radical formation (determined by luminol-amplified CL) without affecting substantionally superoxide production (measured by lucigenin-amplified CL) Owing to that, the luminol-amplified CL lucigenin-amplified CL ratio, which achieved a very high level on 7th day in asbestos-treated rats, dropped to a normal value in the rats after BN administration. (Fig. 10). We have shown earlier [10,11] that the overproduction of hydroxyl radicals is typical for various free radical-mediated disorders. Therefore,   BN administration to the rats with asbestos- induced lung injury permits to suppress the formation of the most toxic free radicals, which are certainly an important initiation factor of the lung damage.

Figure 2
The change in the lung weight /rat weight ratio during the experiment (the same symbols as in Figure 1).

Figure 3
The recovery of neutrophils into broncho –Alveolar space (the same symbols as in Figure 1.).

Figure 4
The recovery of macrophages into broncho – Alveolar space (the same symbols as in Figure 1).

Figure 5
The change in the lung dry weight/wet weight ratio during experiment (the same symbols as in Figure 1).

Figure 6
The change in the hydroxyproline content during the experiment ( the same symbols as in Fig.1).

Figure 7
Lipid peroxidation in the lung tissue (the same symbols as in Figure 1). 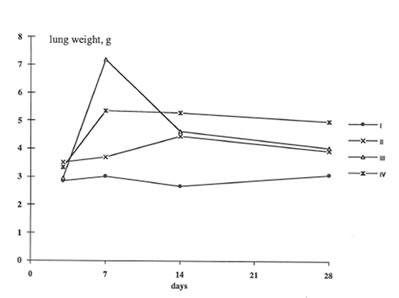 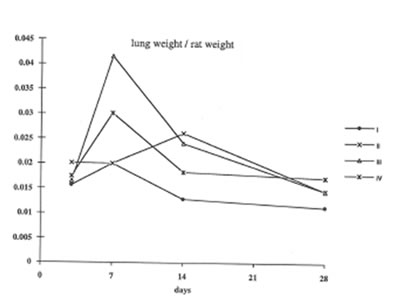 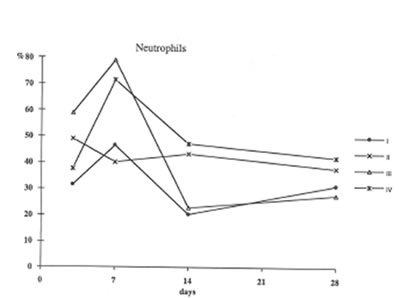 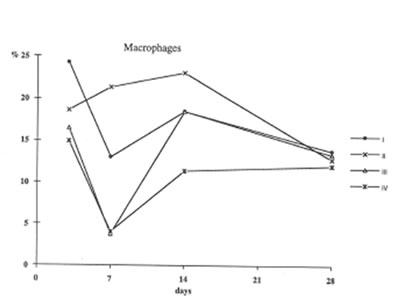 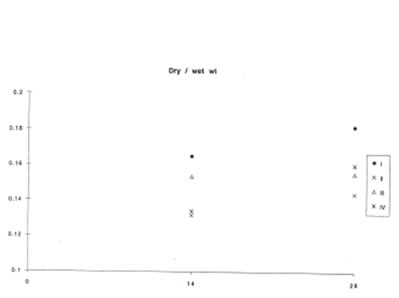 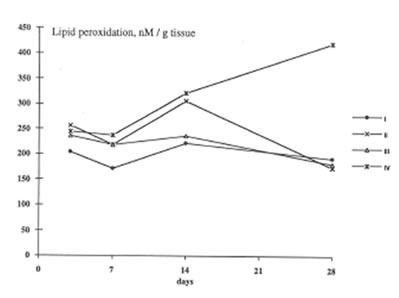 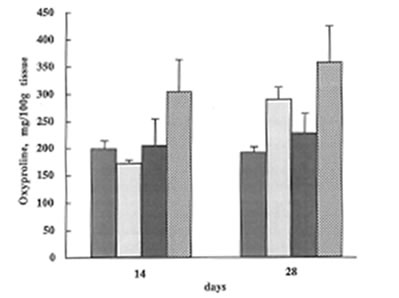 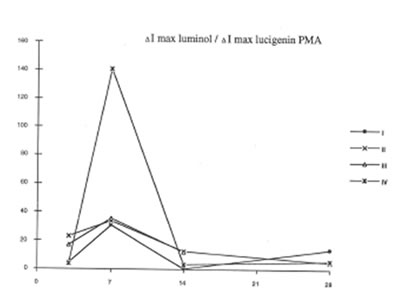