Antimicrobial Potential of Bio-catalyzer α.ρ No. 11 (Bio-normalizer) Against Enteric Microorganisms

The minimum inhibitory concentration of Bio-catalyzer a.r No.11 (Bio-normalizer), a health food supplement made by yeast fermentation of Carica papaya Linn. and traditional Japanese herbs, was found out to be 500 mg/ml. Its antimicrobial activity against these clinical isolates was determined by paper disc diffusion method.

Bio-normalizer showed thnning of growth on 89% of the isolates. The results suggest that Bio-normalizer has the potential to stop the growth of the most commonly encountered enteropathogenic and opportunistic microorganisms which may abound during abnormal conditions in the gastrointestinal tract.

more than thirty thousand compounds are acquired from natural antibiotics. A number of these compounds are used efficiently in the field of infectious diseases[1]. But recently, residual toxicity and side effects as well as cross-resistance of infections had been manifested, thus, upholding the quest for clinically applicable natural antimicrobials.

Bio-catalyzer a.r No.11 (Bio-normalizer) is a natural health product made by yeast

fermentation of Carica papaya Linn.and other tropical herbs with glucose as the main carbon source [2]. It is commercially sold in Japan and in the Philippines as a food supplement. Bio-normalizer is a potent and stable hydroxyl radical scavenger [2,3]. It has the ability to increase gamma interferon in the body suggesting that it can enhance the activity of lymphocytes and helper T-cells in coping with the infection and diseases [4]. Moreover, it can regulate superoxide production as well as stimulate white blood cell and macrophage activity.

Its major component, Carica papaya Linn. which is a known medicinal herb, is used as

antihelminthic, stomachic, diuretic, laxative, remedy for skin problems, among others[5]. It is bacteriostatic to most commonly encountered microorganisms [6] and a scavenger of free radicals [6,7].

from simple colds to chronic diseases such as cardiovascular disorders, brain dysfunctions, gastrointestinal diseases, among others. The present study was undertaken to look into Bio-normalizer’s effect on a number of opportunistic and pathogenic orgasnisms isolated from gastrointestinal specimens.

Clinical Specimens. A total of 84 gastric and rectal exudates were aseptically obtained

Isolation and Characterization. Gastric and rectal samples were streaked on to blood agar

and nutrient agar plates which were incubated for 24 hrs. at 37ºC to yield colonies. Incubation was extended to 48 hrs. when no growth was observed. Isolated colonies were characterized culturally, morphologically and biochemically[8]. Analytical Profile Index (API Systems, France) was used to confirm the identity of the isolates.

its MIC, isolates were subjected to paper disc diffusion method [9,10]. Assay for each isolate was done in triplicates. The plates were incubated at 37ºC for 24 hrs. and zones of inhibition were measured in mm diameter.

One hundred and forty-one isolates were characterized and identified from 84 specimens collected from patients with gastrointestinal disorders. The clinical isolates identified, in order of frequency, were E. aerogenes, E. coli, S. typhi, C. freundii, P. aeruginosa, E. sakazakii, E. tarda, P.vulgaris and E. agglomerans. The MIC of Bio-normalizer was found to be 500 mg/ml. A range of 5-14 mm thinning of bacterial growth was observed in 89% of the clinical isolates wherein E. coli has the largest zone of thinning (Fig. 1). It could be inferred that Bio-normalizer has the potential antimicrobial property since it has the capacity to stop the growth of the microorganisms. 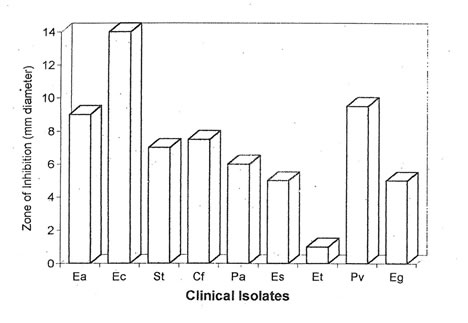 Our study showed that the predominant group of bacteria isolated in the gastrointestinal tract belong to Enterobacteriaceae. It includes both the pathogenic bacteria, which infect or parasitize normal individuals, and the opportunistic bacteria, which occur as a result of abnormalities in host defenses. Opportunistic E. aerogenes, P. vulgaris, E. tarda and C. freundii are responsible for outbreaks of diarrhea [11,12] while E. agglomerans, E. sakazakii and P. aeruginosa are most frequently implicated with human infections and gastroenteritis [13,14]. Salmonella species are some of the most incessantly identified enteric pathogens [15] involved in gastroenteritis [16,17], enterocolitis [16] and diarrhea [18]. Enteropathogenic E. coli infections, being a leading cause of diarrhea [11,15,18] most especially among infants in developing countries [20], are also associated with ulcerative colitis [21] due to toxins they produce. The ability of Bio-normalizer to stop the growth of the most common pathogens, may play a role in controlling the outburst of bacterial colonization, thereby, allowing the immune system to subdue the infection. It may not completely eliminate the infection, but it will prevent the microorgaisms from reproducing.

We, therefore, recommend further investigations to elucidate the mechanism of Bio-normalizer’s antimicrobial action.

The authors thank Dr. Jesus Perez (Section Head), Dr. Shirley Pua, Dr. Paez and the staff of the Gastroenterology Section, Department of Medicine, UST Hospital (Manila, Philippines) for providing the specimens from patients. Sincere thanks are in order for  Mrs. Nimfa Chua of the Microbiology Section, USTRCNS for giving us the standard microorganisms in these experiments. We also thank Dr. Adelwisa Ortega of the Dept. of Microbiology, College of Public Health, University of the Philippines for her invaluable support and guidance.