Ethanol can bring about changes in the body as well as suppress the central nervous system. [6,8] In human beings, it is highly known that the sudden administration of ethanol into the human body influences the concentration of the various substances in the blood. However, active oxygen species may possibly be produced during the process of its metabolism [5]; the animal test using rats suggested that oxygen radical is also associated with the liver disorder caused by alcohol. [1]

On the other hand, Bio-Normalizer is a functional food made by fermentation of edible plants as its main source, and was proven to be a hydroxyl radical scavenger. [10]

We studied the effect of Bio-Normalizer on the bodily changes brought about by the intake of ethanol while at the same time investigating them from the perspective of hematologic biochemistry and from the aspect of free radicals. The WBC and RBS counts in the blood, lactic acid, glucose, GOT and GPT activity, and the concentration of lipids in the serum of adult males were measured before and after alcohol intake. As radical related substances, the SOD activity and the level of lipid peroxide in the blood serum were also measured. At the same time, the effect of BN, when given before alcohol intake, on the changes in the blood substances brought about by ethanol was also examined.

Sixteen males with an average age of 38 years were studied. Two tests were done: one with and the other without BN administration. In the first experiment, the blood was extracted at 1 o’clock. Then, the subjects drank whisky, the amount of which is equivalent to 0.5ml/kg body weight of pure ethanol. Ten ml of venous blood was extracted (from each subject) 40 and 120 minutes after alcohol intake.  Four days later, the second experiment was conducted.  This time, 3.0g of BN was administered (at 8 o’clock) 3 hours before alcohol intake. The rest of the experiment was then done following the procedure similar to the first experiment.

Of the 10ml extracted blood, 2ml was measured for the WBC and RBC counts (Sysmex NE 7000, Toa Co.). Then, 1ml of blood was immediately added to 4 ml perchloric acid solution and used as deproteination fluid. The concentration of ethanol and acetaldehyde in the deproteination fluid was measured using SHIMADZU GC-14A gas chromatograph in conformity to [6] the head space gas chromatography method [9].

Paired t test was used to compare the measured value of substances at 40 and 120 min after drinking with those before drinking. ANOVA was employed to analyze the effect of BN.

Average concentration of ethanol in the blood at 40 and 120 min after drinking were about 50 and 30mg/dl respectively. Concentration of acetaldehyde for 14 cases showed 2-9 mM (Table 1).  The remaining 2 cases showed apparently higher value of 24 and 48 mM, and they are considered as ALDH2 deficient (Low km aldehyde dehydrogenase) given the fact that these remaining two cases show flushing reaction such as facial blush. [2]

The change in blood substances brought about by drinking without BN administration was shown in Table 2. The level of lactic acid increased by about 50% after 40 min of drinking as compared to the level before drinking. Decrease of about 10% in urea nitrogen and WBC count was observed. The level of triglyceride (11%) and TTT (20%) increased (5%) and then returned to the original value (6%).  No change was observed in LDL. FFA showed 6% decrease at 40 and 120 min after drinking. However, the difference with former value was not statistically significant. LPO had an increase of 10% from its previous value after 120 min, but it was not significant. Thus, acute administration of ethanol revealed that the concentration of various substances including lactic acid changed. However, no effects were observed except glucose in table 2.  The level of glucose showed significant reduction 120 min after drinking; but when BN was administered, it showed no fluctuation at all (fig. 2). It has been known that ethanol suppressed the gluconeogenesis in the liver, resulting in hypoglycemia [4]. We suggest that BN may be exerting an influence on sugar metabolism during alcohol intake.

The SOD activity in the serum (fig. 2) showed a significant reduction 40 minutes after alcohol intake; however, it rose after 120 minutes. With BN administration, the level of SOD activity before alcohol intake was significantly higher as compared to the test without BN intake. Also, 40 minutes after alcohol intake, a decrease was not observed, and showing significantly higher as compared to the test value of 40 min after drinking without BN administration. This fact seems to imply that BN has a potential to increase SOD activity and has the effect of suppressing the reduction in SOD activity brought about by alcohol intake. However, the administration of BN didn’t effect any change on the rise of lipid peroxides in the blood serum resulting from alcohol intake. One of the causes of this inconsistency may possibly be attributed to the fact that the value of MDA based on LPO method, by which lipid peroxidation was measured this time, was not necessarily the same with the value based on TBA method.

In relation to the rate of acetaldehyde retention, the rate of the group having a high level of triglyceride (n=5) and of that having a normal level (n=9 (excluding subjects with deficient in ALDH2) were compared by dividing the rates obtained after 120 minutes by the rates after 40 minutes (fig. 2) The high-triglyceride-level group was observed by to have a tendency for a higher rate as compared to the normal group. However, in the cases where BN was used, the high-triglyceride-level group was observed to have a tendency for a reduced rate of acetaldehyde retention, but the difference of the results were not significant, indicating that  although the metabolism of acetaldehyde is slower for individuals with hyperlipemia as compared to normal individuals, BN may have the potential of promoting this metabolism. But, since the differences of the results were not significant, increasing the number of subjects or amount of alcohol intake are considered necessary.

Six of the subjects exhibited a high level of triclyceride, more than 160mg/dl, and a high level of GPT (over 40) was exhibited by 5 subjects. The status of fat metabolism was compared by dividing the value of triglyceride by the value of the free fatty acids between the group that exhibited abnormal high levels of both triglyceride and GPT  (n=5) and the group that exhibited normal levels (n=10) (fig. 3). Before alcohol intake and 40 minutes after alcohol intake, the high-triclyceride-level group exhibited levels higher than the normal group before drinking and 40 min after drinking as shown in the chart. However, when BN was administered, it was observed that the difference between the two group had a tendency to narrow down.

The findings show that it was shown that the acute administration of ethanol resulted in remarkable rise in lactic acid in the blood and a decrease in urea nitrogen and in the number of WBC count. Although the level of lipids increased 40 minutes after drinking, and returned to the level prior to alcohol intake 120 minutes after drinking. However, it was observed that lipid peroxide had the tendency to rise also 120 minutes after drinking. In these, the influence of BN administration was not observed. On the other hand, although a decline in blood glucose level was observed by alcohol intake, no change was not shown in glucose level with BN administration. It is probable that BN exerts an influence on sugar metabolism during alcohol intake in some way. The observed reduction followed by an increase in the SOD activity in the blood serum through alcohol intake could imply the link between ethanol and oxygen radical in the body. Also, the fact that the decline in the blood serum SOD activity has been suppressed by BN administration show that BN may be involved in the relationship between ethanol and radicals in the body. 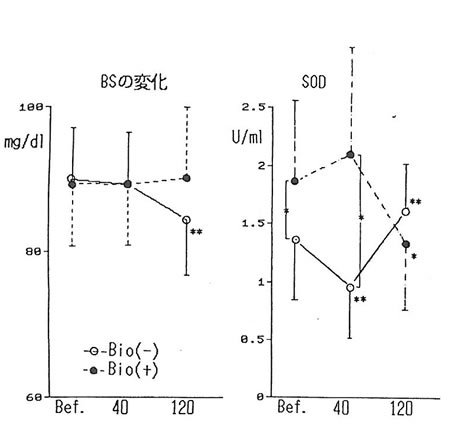 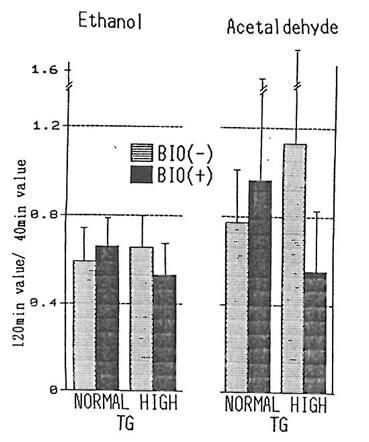 Fig. 2. 120 min– to 40 min–value of ethanol and acetaldehyde in subjects with normal and high TG levels with and without BN.

Table 1. Ethanol and acetaldehyde concentrations after drinking in the subjects with normal and deficient ALDH2.

Table 2. Mean values of parameters from venous blood before and, 40 and 20 min after drinking alcohol. 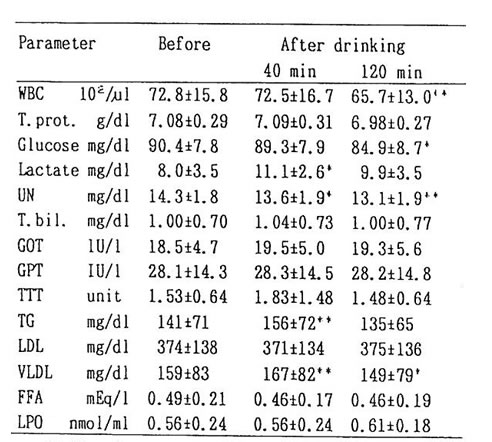 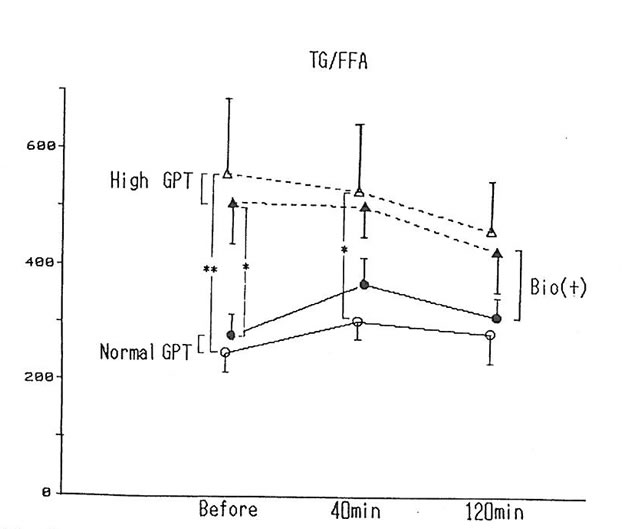 Fig. 3. The value of TG to FFA before and, 40 and 120 min after drinking alcohol with and without BN.