Bio-catalyzer α.ρ No. 11 (Bio-normalizer), a fermented natural health food product was found to be a potent scavenger of hydroxyl radicals and has some ability to quench superoxide and DPPH radicals. In vivo studies showed that oral administration of bio-normalizer (1 g/kg body weight) inhibited significantly thiobarbituric acid reactive substances (TBARS) formation, an index of Lipid peroxidation, in the FeC13 – induced epileptic focus in rats. The hydroxyl radical scavenging components of bio-normalizer proved to be heat and acid resistant, and can be stored for two years at 4°C without loss of activity. Studies on the antimicrobial activity of bio-normalizer revealed that bio-normalizer is bacteriostatic against commonly encountered enteropathogenic microorganisms and bactericidal to the rarely isolated member of the Enterobacteriaceae (Erwinia sp.). Bio-normalizer has been found also to inhibit the chromosome-breaking effect of somatic cell genotoxic agents, like dimethylnitrosamine (DMN) and cyclophosphamide when administered intraperitoneally and orally to Swiss Webster mice.

Bio-catalyzer α.ρ No. 11 (Bio-normalizer) is a natural health food supplement made by yeast fermentation of Carica papaya Linn., Pennisetum pupureum Schum. (Napier grass), Sechium edule Swartz (vegetable) and glucose. It is commercially sold in Japan and in the Philippines.

Free radicals are highly reactive species which damage the cellular proteins, deoxyribonucleic acids and lipids, causing disease such as cancer [1,2], acquired immune deficiency syndrome (AIDS) [3], cardiovascular diseases [4], brain dysfunctions [5,6,7], hypertension [8], arthritis [9], inflammation [10], among others. The use of bio-normalizer was observed to improve a wide range of medical cases from simple colds to chronic diseases. To provide scientific basis for its alleged therapeutic properties, the present studies on the biological activities of bio-normalizer were conducted.

We examined its antioxidant action on active oxygen by electron spin resonance (ESR) spectrometry and its role in the prevention of neural lipid peroxidation. In an attempt to characterize the nature of the bioactive components of bio-normalizer, we separated its components by molecular weight difference using special filter tubes and centrifugation. Acidified and boiled fractions were analyzed for hydroxyl radical scavenging action by electron spin resonance (ESR) spectrometry using spin trap 5,5′-dimethyl-1-pyroline-N-oxide (DMPO). We also investigated on the possible antimicrobial activity of bio-normalizer against enteric microorganisms isolated from clinical specimens of patients with gastrointestinal disorders, using the paper disc diffusion method. Furthermore, we determined the potential genotoxic effects of bio-normalizer against the antitumor drug, cyclophosphamide, which is a strong alkylating agent, and dimethylnitrosoamine (DMN) using the Schmid’s Micronucleus test.

Our study reveals that bio-normalizer is a potent scavenger of hydroxyl radicals and has the ability to quench superoxide and 1,1-diphenyl-2-picrylhydrazyl (DPPH) radicals. At 45.45 mg/ml of bio-normalizer, 95% of the hydroxyl radicals were scavenged (Fig.1), while 5% of superoxide and 11% of DPPH radicals were quenched at 25 mg/ml concentration. Fig. 2 shows that bio-normalizer inhibits significantly TBARS formation; an index of lipid peroxidation, in the FeCl3 induced epileptic foci of rat cerebral cortex [11]. The empirical results observed imply that the free radical scavenging action of bio-normalizer could have suppressed TBARS formation. Thus, it could be inferred that bio-normalizer may prevent neural lipid peroxidation and post traumatic epilepsy [12, 13]. Recent study involving aged rat brain revealed that peroral long term treatment with bio-normalizer, increases superoxide dismutase (SOD) activity in the mitochondrial and cytosolic fraction of the cortex, medbrain, pons-medulla oblongata and cerebellum. On the other hand, TBARS formation showed regional variation [14]. The increase SOD activity in most brain regions, and the suppression of TBARS formation in most parts of the brain, strengthen the contention that bio-normalizer inhibits the effects of oxygen-derived radicals such as O2, OH, H2O2 and organic peroxides, in promoting premature aging. Normally, SOD operates against free radicals in the brain in conjunction with catalase, glutathione peroxidase, vitamin E and ubiquinone, glutathione and vitamin C, selenium and dopamine. Bio-normalizer could be acting similarly with one, or with a combination of these substances.

Studies on the stability of the free radical components of bio-normalizer revealed that these substances are thermostable at 100°C, and acid-tolerant at pH 1.2 as shown in Fig. 3. The study also showed that bio-normalizer can be stored for two years at 4°C without change in its activity. These informations suggest that this health food supplement is unlikely to be destroyed by the acidity of the gastric juice [15].

In the determination of antimicrobial activity of bio-normalizer, 141 isolates were characterized and identified from 84 specimens collected from patients with gastrointestinal disorders. All of the isolates were facultative anaerobes which include Staphyloccus aureus (1%), Pseudomonas aeruginosa (3%), Gamma Streptococcus (1%), Citrobacter freundii (5%), Edwardsiella tarda, Enterobacter agglomerans and Proteus vulgaris (2% each), Salmonella typhi (15%), Ent. sakazakii (3%), Escherichia coli (32%), Ent. aerogenes (33%), and Erwinia sp. (1%). The minimum inhibitory concentration of bio-normalizer was found to be 500 mg/ml. A range of 5-15 mm and 9.68 mm diameter thinning of bacterial growth was observed in 52.48% of the isolates and Campylobacter jejuni, respectively. It could be inferred from this observation that bio-normalizer has bacteriostatic property. Erwinia sp. was the only organism with a clear zone of inhibition (5.66 mm diameter), suggesting a bactericidal activity for bio-normalizer. Its antimicrobial activity is comparable to commercial antibiotics with bacteriostatic property like chloramphenicol and tetracycline when assayed by the paper disc diffusion method. Analysis of variance (ANOVA) at 2,36F.05 = 3.26 confirmed that there is no significant difference among the activities of these broad-spectrum antimicrobial agents and bio-normalizer (Table 2).

Bio-normalizer contributes to the maintenance of the normal gastric flora in the event of an outbreak of infection like in the case of contaminated food ingestion. It may not completely eliminate the infection but it will keep the microorganisms from reproducing. It could act effectively on the toxin-producing C. jejuni which infects persons of all ages and whose ability to produce disease is affected by its colonization of the gastric mucus lining [6-18]. The principle underlying bacteriostatic activity include interference with protein synthesis which results in the failure of the microorganisms to grow as well as inhibition of the synthesis of essential metabolites. Bactericidal activity which was evident on Erwinia sp. (a phytopathogen), is based on irreversible lethal process such as enzyme inactivation and membrane damage [19-20].

Bio-normalizer thorough its mixed biologicaliy active compounds, could have been involved in these interferences such that bacteriostatic and bactericidal activities were observed. Its free radical scavenging activity could have influenced the inhibition of toxic radicals produced during microbial infection, thereby, acting as an antimicrobial agent against the enteric pathogens.

DMN, an established carcinogen is formed from secondary amines found in tobacco leaves and is metabolished by liver enzymes, leading to the release of carbocations, positively charged carbon-intermediates, which are very active alkylating agents of DNA [21]. Cyclophosphamide is an anti-tumor drug [22] that acts as a bifunctional alkylating agent of DNA after activation by the enzymes of cytochrome P450 system associated with the microsomal fraction of the liver [23). Biotransformation of these two compounds into active alkylating agents of DNA could escalate to the chromosomal level [24]. Administration of bio-normalizer could have inhibited the alkyiation of DNA. In the presence of bio-normalizer it is highly probable that DNA alkylation is low.

Iron-induced epileptic focus in rats. Epileptic foci in rats were induced by injection of 10 mM FeCl3 into the cerebral cortex. Control groups were injected with acidified saline solution. For the experimental animals, bio-normalizer was administered orally at 1 g/kg body weight, 30 mins, prior to injection.

Clinical isolates. A total of 84 specimens (gastric and rectal) were aseptically obtained through endoscopy and proctoscopy by the medical staff of the Gastroenterology Section of the Dept. of Medicine, University of Santo Tomas (UST) Hospital (Manila, Philippines) from patients clinically diagnosed to be suffering from gastritis, amoebic colitis, diarrohoea gastric ulcer, internal and external hemorrhoids.

Isolation and characterization. Gastric and rectal samples were streaked on nutrient agar and blood agar plates which were incubate for 24 hrs. at 37°C aerobically and aerobically to yield colonies. For the maintenance of anaerobic conditions, an anaerobic jar system together with disposable Gas Pak envelopes was used. Isolate colonies were characterized culturally, morphologically, and biochemically [26]. Analytical Profile Index was used to confirm the identity of the isolates.

Antimicrobial analysis. The paper disc diffusion assay was employed to determine the antimicrobial activity of Bio-normalizer, at its MIC. The plates were incubated at 37°C for 24 hrs and zones of inhibition were measures in mm diameter.

Micronucleus test. Swiss Webster mice, 17-12 weeks old were kept in plastic cages and given food pellets and water ad libitum. DMN and cyclophosphamide (mutagenic compounds) and bio-normalizer were administered orally (using a steel gavage attached to a syringe) and intraperitoneally. A dose of 15 mg kg-1 body weight for DMN and 60 mg kg-1 body weight for cyclophosphamide were given to the mice. Bio-normalizer (25 mg ml-1) was given 1 hr. later after each administration. One group was given bio-normalizer alone, one set was given water (solvent for DMN and bio-normalizer), and another group was given dimethylsulfoxide (solvent for cyclophosphamide). The doses were repeated 24 hrs after. The animals were killed by cervical dislocation 30 hrs. after the initial administration. Both femora were removed and the bone marrow cells were flushed out from the femur using 10% fetal calf serum. The cells were separated from the supernatant by centrifugation. Four slides of the cells per femur were then prepared, fixed, stained and scored for the number of micronucleated polychromatic erythrocytes.

Table 1. Effect of storage at 4°C on the hydroxyl radical scavenging action of bio-normalizer (50 mg/ml).

F = 3.26 (df = 2.36 at 0.5 level of significance)
No significant difference among the variables.
The above values were averages of 3 trials.
LEGEND: th-zone of thinning of bacterial growth
zoi -clear zone of inhibition
NR -no stimulation nor inhibition of growth

Table 3. Percent reduction in the number of micronuclei induced by DMN & cyclophosphamide 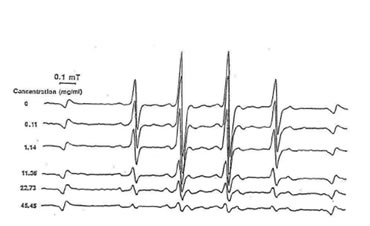 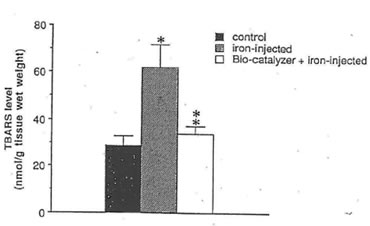 Fig. 2.     Effect of bio-normalizer treatment on TBARS levels in the FeCI3-induced epileptic foci of rat cerebral cortex. Five microliters of 0.1 M FeCl3 or saline (control group) were injected into rat sensory motor cortex. Bio-normalizer at 1 g/kg body weight was orally administered to rats prior to FeCl3 injection. The values are the means (n=8) +1-SEM. *p<0.025 vs control group.; **p < 0.005 vs iron-injected group; no significant difference between control  and bio-normalizer-administered-iron-injected group. 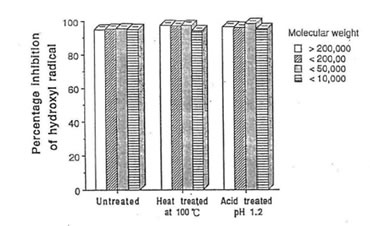 Fig. 3      Efffect of heat and acid treatment on the percentage inhibition of hydroxyl radical scavenging components in Bio-Normalizer. The values are the means +/- SEM of 5 determenations. 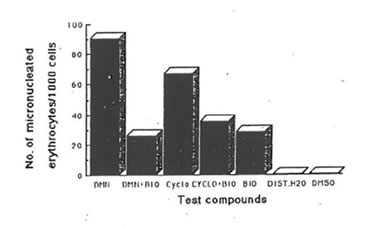 Fig.4.      Effect of bio-normalizer (BIO) on the genotoxicity of dimethylnitrosoamine (DMN) and cyclophosphamide (CYCLO) (intraperitoneal administration). Number of micronuclei for each of the compounds and systems tested. Values are total averages from 12 slides. Controls: distilled water -DIST. H20, dimethylsulfoxide -DMSO. 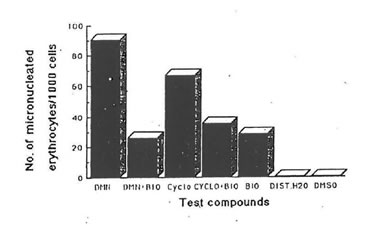 Fig.5.       Effect of Bio-normalizer on the genotoxicity of dimethynitrosoamine and cyclophosphamide (oral administration). Number of micronuclei for each of the compounds and systems tested. Values are total average from 12 slides. Controls: distilled water – DIST H2O dimethysulfoxide – DMSO.