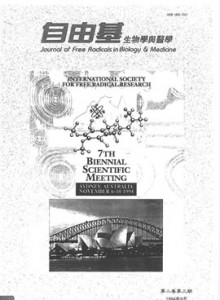 The Organising Committee thanks the following organisations and acknowledges their commitment to continuing education, research and the well-being of the community.

courtesy of the Sydney Opera House

Inside back cover map courtesy of Sydney Convention and Exhibition Centre

Back cover photographs from the Australian Tourist Commission

On behalf of the International Society for Free Radical Research and the Organizing Committee of the 7th Biennial Scientific Meeting of the Society, we welcome you to Sydney and this conference.

We believe you will find the scientific programme stimulating and provocative, unusual in places, and of the highest quality. We look forward to the mutual exchanges which will result and hope you enjoy the programme.

We are grateful for the corporate support we have received and acknowledge the importance of such participation to the overall success of ISFRR ’94 and give special thanks to our sponsors for their commitment.

We welcome you and thank you for your participation and contribution to the success of ISFRR ’94.

gold card sponsor of the conference

PL.H      Myocardial and Other Ischaemia and/or Reperfusion
David Hearse

PL.T     Disorders of the CNS and Ageing
Robert Floyd

SP.E       Free Radicals and Metal Catalysis
to be announced

SP.H      Myocardial and Other Ischaemia and/or Reperfusion
Gregory Bulkley

SP.T     Disorders of the CNS and Ageing
Richard Cutler

02          Inhibition of Oxidative Modification of LDL by Ebselen
Etsuo Niki

The present study was designed to investigate the biodiscrimination between natural and unnatural form of α- Tocopherol ( α – Toc) by feeding non-labeled 2-ambo-α-Toe Ac(equimolar mixture of RRR- (natural) and SRR-α-Toc Acs (unnatural)), which have no – possibility of hydrogen exchange and isotopic effects, to male rats.

The animals (F344/DuCrj, at the 4th week after birth) were fed diets containing 100 mg of 2 – ambo-α-Toc Ac/kg diet for 8 weeks. Amounts of α-Tocs in blood, tissues and bile were determined by newly developed HPLC method.

There were evident differences between the amounts of RRR- and SRR-α-Tocs in blood, tissues and bile. The amounts of SRR were 8.1% (plasma), non-detectable (ND, RBC), less than 15.7% (liver, or less (the others)). Besides, it was especially noted that the amounts of SRR in brain were ND.

And the excretion of RRR in bile was higher than that of SRR, and the amount of absorption of SRR via portal vein was very small.

To provide for the scientific basis of the purported therapeutic and preventive actions of Bio-normalizer (BN), a fermented functional health food from papaya, we studied by electron spin resonance/spin trapping and chemiluminescence (CL) methods its effects on the free radical production in different systems. BN inhibited hydroxyl, peroxyl, carbon-centered, and lipid peroxides in various rat brain regions; suppressed oxygen radicals

Much work has been done to examine the antioxidant effects of tocopherol (toc) homologues in vitro. The present study was undertaken on the effects of α– or Ȣ – toc on lipid peroxide (LPO) formation in rat tissues. Hale Wistar strain rats 3 weeks old were acclimatized to a control diet for one week, and they were divided into 3 groups of six rats each. Group 1 was fed a vitamin E deficient diet; groups 2 and 3 were fed 100g of vitamin

E-deficient diet supplemented with 10mg of  – or Ȣ – toc, respectively. Al l groups of rats were maintained on these diets for 3 weeks. The toe levels of serum and of tissues were determined by HPLC method. LPO values in the rat tissues were compared by the TBA and Chemiluminecence (CL) methods. α –Toc was widely distributed in rat t issues. A Ȣ-Toc content equal to that of the α-toc group was admitted into the adipose tissues, but trace amounts of Ȣ-toc in group 3 were admitted into other tissues. In group 3, LPO values (TBARS) of tissues were lower than in group I, but even the adipose tissues containing Ȣ-toc were much higher values than those of group 2.

Although only small amounts of Ȣ-toc was contained, in the testes and brain the low LPO values were admitted.