(PA27) The Regulatory Role of Reactive Oxygen Species in Gene Expression and Protein Synthesis. The Effect of Antioxidants and Free Radical Modulators 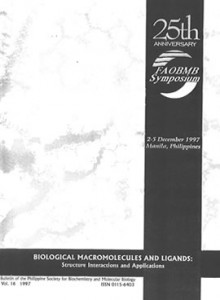 Bulletin of the Philippines Society of Biochemistry and Molecular Biology

THE REGULATORY ROLE OF REACTIVE OXYGEN SPECIES IN GENE EXPRESSION AND PROTEIN SYNTHESIS.
THE EFFECTS OF ANTIOXIDANTS AND FREE RADICAL

In the last decade numerous studies have been going on to elucidate the role of reactive oxygen species (ROS) in the regulation of protein synthesis, in the functioning and damaging to structural proteins, as well as in the enzyme activity. A basic knowledge in the field allows developing new antioxidants and ROS modulators with potency to prevent or/and ameliorate the ROS-dependent impairment of protein homeostasis. Thus, Nacetylcystein (NAC) was found to be an effective inhibitor of ROS-induced cytoplasmic transcriptional factors NFKB and AP1. NAC can also suppress mRNA and protein synthesis for some oxidative stress-induced proteins. Contrary to that, Bio-Normalizer (BN, a fermented product of Carica papaya). known as free radical modulator, is the inducer of cytokine (TNF-α and IL-1) synthesis. It was also shown that BN was the activator of the inducible nitric oxide synthase (iNOS) in the in vitro and ex vivo conditions. BN caused the INOS induction and increased NO production by both circulating blood cells and tissue macrophages of diabetic patients. Though the nature of inhibitory and stimulatory activity of different antioxidants and ROS-modulators remains unclear, these effects may explain, at least partly, the clinical relevance of such compounds.