Abstract–Bio-catalyzer (α•ρ NO. 11 (Bio-normalizer) and its by-product are natural health products made by yeast fermentation of glucose, Carica papaya Linn., Pennisetum pupureum Schum.，and Sechium edule Swartz. Their effects on free radicals were examined by electron spin resonance spectrometry using spin trapping agent 5,5-dimethyl-l-pyroline-l-oxide (DMPO). It was observed that both Bio-catalyzer and its by –products scavenged 95% of DMPO-OH spin adducts (89 x 1015 spins/ml) generated by FeSO4-H2O2 –diethylene triamine pentaacetic acid system at 45.45mg/ml each. Five percent of DMPO-O2- spin adducts (27 x 1015 spins/ml) generated by hypoxanthine-xanthine oxidase system and 11% of 1,1-diphenyl-2-picrylhydrazyl radicaJs (7 x 1015 spins/ml) were quenched using 25 mg/ml of Bio-catalyzer while 5% of superoxide and nil DPPH radicals were scavenged by its by-product. Vivo tests showed oral administration of 1- /kg body weight of Bio-catalyzer significantly inhibited thiobarbituric acid reacitve substances formation, which is an index of lipid peroxidation, in the FeCl3 induced epileptic focus of rats. These findings suggest at Bio-catalyzer or its by-product may be useful health foods against neural lipid peroxidation, traumatic epilepsy and aging.

Bio-catalyzer α•ρ NO. 11 (bio-normalizer) is a white, sweet，granular，natural health food commercially sold in Japan and the Philippines. It is made by yeast fermentation of Carica papaya Linn. (a widely known Philippine herb), Pennisetum pupureum Schum. (Napier grass) ，Sechium edule Swartz (vegetable) and glucose as main carbon source. Its by-product，called Bio-catalyzer 2-B，also a white sweet granule made by the same fermentation process，is being tested in humans，plants microorganisms， animals and poultry for improved yield，growth enhancement and disease prevention.
Oxygen free radicals have been implicated in neurological disorders such as epilepsy,1 aging,2,3 ischemia,4,5 trauma,6 and rheumatoid arthritis,7 as well as in cancer,8,9 and other diseases. Among the active oxygens，hydroxyl radicals are the most reactive which damage proteins，break deoxyribonucleic acids (DNA) and promote lipid peroxidation,10 Hydroxyl radicals arise from ionizing radiation, ultrasound, lithotripsy, lyophilization, ozone and ethanol metabolism (MEOS),11 iron solutions,12 and brain guanidino compounds. 13

Antioxidants that quench active oxygens are well documented.14-20 Not much literature however, has been published on antioxidants produced by fermentation. To our present knowledge, Bio-catalyzer and its by-product are the first fermented health products with antioxidant action. To initially provide a scientific basis for bio-catalyzer’s purported therapeutic action on human disease we examined its antioxidant action on active oxygens by electron spin resonance (ESR) spectrometry and its role in the prevention of neural lipid peroxidation. Our findings and evaluations suggest a link between the curing ability of Bio-cataIyzer and its free radical scavenging action and inhibiting property against neural lipid peroxidation in iron-induced epileptic focus in rats.
We also examined the antioxidant action of the byproduct of Bio-catalyzer.

Fig.2. Effect of Bio-catalyzer and Bio-catalyzer 2-B on ESR signals on 1,1-diphenyl-2-picrylhydrazyl(DPPH) radicals and DMPO spin adducts of superoxide and hydroxyl radicals.

Iron-induced epileptic focus in rats
Preparation of FeCl3-induced epileptic rats were done following the procedure of Willmore et al.22 The cerebral cortex was dissected on an ice plate as described in Glowinski’s method23 and kept at -80°C until thiobarbituric acid reactive substances (TBARS) analysis. One gram of bio-catalyzer per kilogram body weight of the animal was dissolved in 1 ml of distilled water and orally administered to rats 30 min before iron injection.

TBARS in tissues was measured as described by Ohishi.24 Statistical analysis was performed using Student’s T-test

Fig. 3 Dose-response of Bio-catalyzer and Bio-Caqtalyzer 2-B on DMPO-OH spin adducts. The values are means (n-6-8)

Bio-catalyzer has been in Japanese and Philippine markets for three years. The beneficial effects of the product as a health food have been widely attested by its users. Reports on cured cases of Bio-catalyzer on various simple and serious ailments have generated much interest in the product. Scientific reports or evidences however, were sorely lacking to explain such claims.
Our study reveals that Bio-catalyzer and Biocatalyzer 2-B are potent scavengers of hydroxyl radicals and have some ability in quenching superoxide and DPPH radicals. The ESR parameters of the spin adducts of DMPO-OH of the study agree well with the report of Buettner25 for Fe(II)-DETAPAC-H2O2 system.
Subpial isocortical injection of iron salts26-32 or iron-containing blood products32,33 caused significant increase in superoxide26,27,29,32 and hydroxyl29 radicals, 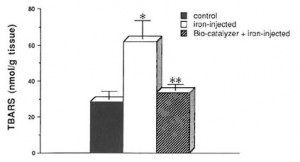 Fig. 4. Effect of Bio-catalyzer treatment on TBARS levels in the FeCI3-induced epileptic focus of rat cerebral cortex. Five microliters of 0.1-M FeC13 or saline (control group) were injected into rat sensorimotor cortex. Bio-catalyzer at 1-g/kg body weight was orally administered prior to FeC13 injection. The values are the means (n = 8) ± SEM. *p < 0.0025 versus control• ** < 0.005 versus iron injected group;no significant difference between control and Bio-catalyzer-administered-iron-
injected group.

fluorescence28 or malondialdehyde32 in epileptogenic foci in rats with subsequent initiation of lipic peroxidation,28,30,32 recurrent epileptogenic discharges with focal brain edema, cavity necrosis, and gliosis.31 Vivo tests using similar model of iron-induced epileptic rats as those of TJ-960,34 EPC-K1,1,35 and Guilingji36 showed that Bio-catalyzer significantly inhibits TBARS formation in these animals. The nearly similar TBARS of the control group (saline injected) and Bio-catalyzer-treated-iron-induced epileptic rats indicate that the harmful effects of such radicals were counteracted by Bio-catalyzer. Sensorimotor cortex of rats treated with Bio-catalyzer before iron-injection showed low levels of TBARS in contrast to the observed high TBARS level in untreated iron-induced epileptic rats. These imply that Bio-catalyzer, with its free radical scavenging action (specially on hydroxyl radicals) and ability
to suppress the formation of TBARS, may help prevent neural lipid peroxidation, traumatic epilepsy, and aging.3,17
Since Bio-catalyzer 2-B is prepared by the same method, has the same composition, and exhibits same free radical scavenging ability as that of Bio-catalyzer, It is expected that similar data on iron-induced epileptic rats will be obtained.
Yeasts are the most likely free radical quenching components of Bio-catalyzer and Bio-catalyzer 2-B. The plate count in 2% glucose 1% peptone-0.5% yeast extract, pH 5 at 30°C yield 1-5 x 105 yeast cells/g in these products. Antioxidant enzymes like glutathione reductase37 and superoxide dismutase (SOD)38 have been found in yeasts. SOD in particular, has been linked as a therapeutic agent for human diseases.39 Bio-catalyzer and Bio-catalyzer 2-B showed some ability in quenching superoxide radicals (although to a lesser extent than their scavenging actions on hydroxyl radicals). Based on this finding and the yeast content of these products, it is likely that Bio-catalyzer and its by-product may also contain SOD or SOD-like activity.