Stability of the Hydroxyl Radical Scavenging Components of the

Introduction: “Bio-normalizer” (Bio-catalyzer a.r No.11) is sold as a natural, non-toxic nutritional health food in Japan. Its purported therapeutic action on various human diseases has been linked to its hydroxyl radical scavenging action in vitro, and to its thiobarbituric acid reactive substances (TBARS) inhibiting property in vivo using the FeCl3–induced epileptic model in rats [1]. Subpial isocortical injection of iron caused a significant increase in hydroxyl radicals in epileptogenic rat cerebral foci, with subsequent initiation of lipid peroxidation, recurrent epileptogenic discharges with focal brain oedema, cavity necrosis and gliosis [2-7]. Hydroxyl radicals – the most reactive and hazardous of the oxygen species – have been proposed to mediate a variety of cellular injuries [8].

In the hope of explaining the nature of the substances responsible for scavenging hydroxyl radicals in Bio-normalizer, we separated its components, by molecular weight difference, using special filter tubes and proceeded with centrifugation. Acidified or boiled fractions were analyzed for hydroxyl radical scavenging action by electron spin resonance (ESR) spectrometry using spin trap 5,5’-dimethyl-1-pyrroline-N-oxide (DMPO).

We also examined the effect of storage at 4oC on Bio-normalizer and its hydroxyl radical scavenging property.

75 mL of 1mM FeSO and 1 mM DETAPAC. 75mL of 1M H2O2, 50ml of sample and 20 mL of 0.092 mM DMPO were mixed for 5s and placed in a special flat tube (JEOL Ltd., Tokyo, Japan). The hydroxyl radicals as spin adducts of DMPO were analyzed after exactly 40 s by ESR spectrometry (JEOL, JESFE1XG, Tokyo, Japan) using manganese oxide as internal standard.

The following ESR parameters were used: magnetic field – 334 ± 5mT, response –0.1 s, sweeptime –1 min. amplitude- 4 x 100, modulation time – 0.08mT, power –8mV, and temperature – room temperature. The spin number of the generated hydroxyl radicals were calculated from the ratio of the second peak of the DMPO-OH spin adducts and the signal height intensity of 2,2,6,6 tetramethyl-4-hydroxylpiperidine-1-oxyl.

The effect of long-term storage, heat (boiling the fractions at 100oC for 60 min) and acid treatment with 60% perchloric acid on the hydroxyl radical scavenging property of Bio-normalizer was analyzed by ESR spectrometry as described above.

Results and Discussion: The four water-soluble fractions of Bio-normalizer obtained after filtration and centrifugation were all found to scavenge hydroxyl radicals (Figure 1). We thought initially that the fermentative enzymes of yeast, papaya and other medicinal plants in Bio-normalizer may have contributed to its antioxidant action [1]. But its hydroxyl radical scavenging components, which appeared to be both thermostable at 100oC and acid tolerant at pH 1.2 as shown in Figure 1, rule out the possibility that these enzymes are responsible for such a property.

This phenomenon is rarely observed in natural products and may play a role in the favourable effect of Bio-normalizer on various human diseases. Being acid-tolerant at pH 1.2 the material is unlikely to be destroyed by the acidity of the gastric juices of the stomach and intestines with pH around 3.

It is also possible that the high molecular weight fractions (e.g. glucopeptide) had been hydrolyzed (by acid and heat) into smaller subunits such as glucose, thiols, OH and SH groups or ions with some ability to scavenge hydroxyl radicals. For example, glucose, one of the added components in Bio-normalizer, was recently found to scavenge dose-dependently hydroxyl radicals at concentrations ranging from 0.05-50 mg mL-1. (unpublished data). 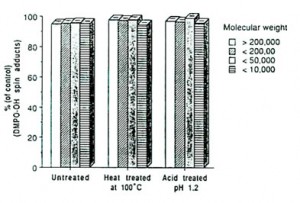 Our findings (Table 1) also show that the hydroxyl radical scavenging components of Bio-normalizer are stable during storage for two years at 4oC.