From the Osato Research Institute, Gifu, Japan, and the Russian Institute of Pediatric Hematology, Moscow, Russia

Bio-normalizer, a natural Japanese health food prepared by the fermentation of Carica papaya, exhibits therapeutic properties against various pathologies including tumors and immunodeficiency. To understand the mechanism of bionormalizer’s therapeutic effects, we studied its action on the production of active oxygen species in cell-free systems (the Fenton reaction, the xanthine-xanthine oxidase system, and the hydrogen peroxide-hypochloride or hydrogen peroxide-horseradish peroxidase systems) and by human blood neutrophils and erythrocytes and rat peritoneal macrophages. Bionormalizer efficiently inhibited the formation of oxygen radicals in cell-free systems and partly decreased spontaneous and menadione-stimulated superoxide production by erythrocytes, but manifested both stimulatory and inhibitory effects on oxygen radical release by dormant and activated phagocytes (neutrophils and macrophages). We suggest that bio-normalizer is able to enhance the intracellular production of innocuous superoxide ion and, at the same time, to diminish the formation of reactive hydroxyl radicals, perhaps by the inactivation of ferrous ions, the catalysts of the superoxide-driven Fenton reaction. We also propose that the normalization of an organism’s superoxide level is one of the molecular mechanisms of bio-normalizer activity.

Bio-normalizer, a traditional natural Japanese health food prepared by the fermentation of Carica papya, exhibits therapeutic effects in various human diseases. It was previously proposed that bio-normalizer efficiency in the treatment and prevention of severe pathologies is linked to its free radical scavenging properties such as the scavenging of hydroxyl radicals1 and the inhibition of lipid peroxidation.2 There is now a large body of evidence that free radical scavengers and antioxidants may inhibit neoplastic events at cellular and molecular levels,3 prevent various environment-associated pathologies,4 and diminish other disorders mediated by free radicals. It is also well established that the most important source of reactive oxygen species in mammalians is phagocytosing cells such as circulating neutrophils and tissue macrophages. Therefore, we have studied for the first time the effects of bio-normalizer on oxygen radical production by human blood neutrophils and erythrocytes and by rat peritoneal macrophages. We found that bio-normalizer both inhibited and stimulated the release of oxygen radicals by phagocytes, which is supposed to be an origin of bio-normalizer’s in vivo biological activity; In addition, we showed that bio-normalizer scavenged free radicals produced in some cell-free systems.

Bio-normalizer was produced by Sun-O International Inc., Gifu, Japan, by the fermentation of Carica papaya tropical herbal plants. A major component of bio-normalizer is a mixture of plant and yeast glycopolysaccharides. In addition, bio-normalizer contains amino acids (for example, tryptophan, leucine, and glutamic and aspartic acids), vitamins B-6 and C, glucose, and the protease-antiprotease system of papain. Under our experimental conditions, the suspension of bio-normalizer granules was prepared daily in Hanks’ balanced salt solution (HBSS). In most experiments, bio-normalizer particles were sedimented by centrifugation after a 2 h incubation in HBSS, and clear supernatant containing the soluble bio-normalizer (SBN) fraction was used in experiments. SBN contained all the above cited compounds excluding insoluble, high molecular weight glycopolysaccharides. 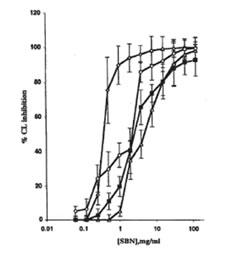 Venous blood (2 ml) was obtained from healthy subjects after their informed consent. Heparin-treated blood was carefully layered on a dextran-metrizoate mixture (2 ml, 2:5 vol:vol) and incubated at room temperature for 30 min. Then, the leukocyterich top layer was placed on 1 ml Ficoll-Hypaque (d = 1.119) and centrifuged at 400 x g for 30 min. The neutrophil-containing pellet was washed twice in cold HBSS and resuspended in a minimal essential medium (MEM). Cell suspensions contained >95% neutrophils as measured by differential cell counts with a Coulter counter. Neutrophil viability was 90-98% as assessed by the exclusion of 0.2% trypan blue dye.

Erythrocytes were collected from the bottom layer after dextran-metrizoate sedimentation, washed 3 times with 0.1 mol potassium-sodium phosphate buffer/L (pH 7.3), diluted with this buffer to the 2% hematocrit, and stored at 4°C until analyzed. Cells were counted by the Coulter method.

Adult male Wistar rats were injected intraperitoneally with l0 ml HBSS and killed 5 min later. The peritoneal lavage fluid was removed, placed on top of Monoprep solution (d = 1.068), and centrifuged at 400 x g for 30 min. The upper portion containing mononuclear cells was washed twice with cold calcium-and magnesium-free HBSS and resuspended in MEM supplemented with l% heat-inactivated calf serum. A differential cell count was performed microscopically using Giemsa staining: about 80% of cells were macrophages and monocytes and the others were lymphocytes, mast cells, and erythrocytes; >95% of cells excluded trypan blue.

The production of active oxygen species in the Fenton reaction and by the xanthine-xanthine oxidase, hydrogen peroxide-horseradish peroxidase (HRP), and hydrogen peroxide-hypochloride systems was measured by luminol- and lucigenin-amplified chemiluminescence in the chemiluminescence unit of an LKB luminometer (Model 1251, Wallan, Finland) at 25°C.

For the Fenton reaction, FeSO4 (2 mmoVL) and luminol (0.1 mmol/L) were incubated with or without bio-normalizer in 0.125 mol phosphate buffer/L (pH 7.4). Next, the reaction was started by adding hydrogen peroxide (l mmol/L) and the chemiluminescence intensity was registered continuously.

For the measurement of superoxide production by erythrocytes, an erythrocyte suspension (20 µl) and cytochrome c (50 µmol/L) were incubated with or without bio-normalizer in 0.1 mol potassium phosphate buffer/L (2 ml) with or without menadione (10 µmol/L) at room temperature for 60 min. After the sample was centrifuged, the light absorbance of the clear supernatant was measured at 550 nm on a Beckman DU 600 spectrophotometer (St. Louis, MO, USA). Superoxide content was calculated with the extinction coefficient of reduced cytochrome c equal to 21000 mol · L -1 · cm-1.

To measure superoxide production by neutrophils and macrophages and NADPH oxidase activity,5 we incubated a cell suspension (5 x 105 cells) and cytochrome c (50 µmol/L) with or without bio-normalizer in HBSS and continuously recorded the light absorbance at 550 nm. The reaction was started by adding PMA (10 ng/mL), stopped at the maximal rate by the addition of 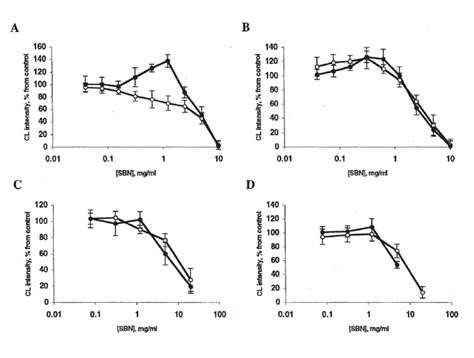 All measurements were performed in triplicate, and the results are expressed as an average ± SD from three to four independent experiments.

SBN (Fig. 1) and bio-normalizer (data not shown) inhibited the production of oxygen radicals in a concentration-dependent manner in the cell-free systems studied. Thus, SBN I50 values were equal to 0.4, 4.5, 2.0, and 2.5 mg/ml for the Fenton reaction, and the hydrogen peroxide-hypochloride, hydrogen peroxide-HRP, and xanthine-xanthine oxidase systems, respectively. At the same time, SBN and bio-normalizer showed only weak inhibitory activities in erythrocyte suspension with or without menadione (data not shown).

Bio-normalizer is a complex mixture of various biologically active compounds. Therefore, it is not surprising that bionormalizer can affect oxygen radical production by different pathways. We found that bio-normalizer inhibited the formation of hydroxyl radicals by the Fenton reaction, superoxide production by xanthine oxidase, and the formation of other active oxygen species by the hydrogen peroxide-hypochloride and hydrogen peroxide-HRP systems (Fig. 1). However, in contrast with cell-free systems, at the cellular level, bio-normalizer exhibited both stimulatory and inhibitory activities. Although the inhibitory effects of bio-normalizer may be explained by its scavenging properties, the nature of the stimulatory effect of bionormalizer depends on different mechanisms. 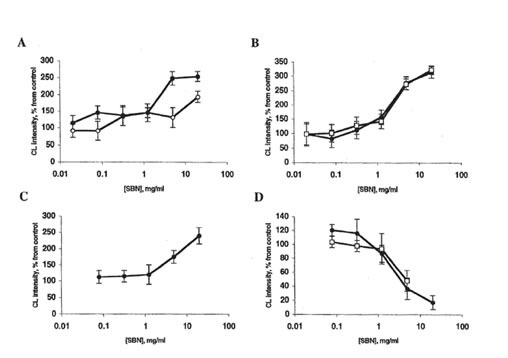 FIG. 3. Effects of bio-normalizer and soluble bio-normalizer (SBN) on lucigenin-amplified chemiluminescence (CL) of rat peritoneal macrophages. Every point is an average of four experiments. ●, bio-normalizer; □ or ■. SBN. A: Spontaneous CL. Basal CL level is 2-10 mV/106 cells. The stimulatory effects of 5 mg bio-normalizer/ml and 20 mg SBN/ml are significantly different from control (p < 0.01 and 0.05, respectively). B: CL activated by phorbol

The ability of bio-normalizer to inhibit hydroxyl radical production and enhance superoxide production by phagocytes suggests the conversion of highly reactive hydroxyl radicals to innocuous superoxide ions: This process probably takes place in the cytoplasm or cellular membranes and possibly plays an important role in prevention of the destruction of biological molecules and structures.10 It can also be a molecular basis of bio-normalizer normalizing activity because the optimal level of superoxide ion in the blood and tissues is thought to be an important factor of normal functioning of the immune system 11 and gene expression.12