Rutin (quercetin-3-rutinoside). a natural bioflavonoid, and Bio-normalizer (BN), a natural Japanese health food prepared by the fermentation of Carica papaya, are now drawing a wide interest as nontoxic therapeutic and preventive agents possessing antioxidant and free radical scavenger activities. Rutin is already widely applied for the treatment of vascular disorders (for decreasing the permeability and fragility of capillaries) while BN presumably manifests beneficial effects in the treatment of such pathologies as tumors, inflammation, allergy, immunodeficiency, etc. Since free radicals at least partly participate in the initiation of these pathologies, it seems important to study the antioxidant and free radical scavenging properties of these two natural compounds.

Earlier, we have already shown that rutin inhibited lipid peroxidation of lecitin liposomes, bovine heart microsomes,1 and rat brain homogenates.2 It was proposed that the inhibitory effects of rutin are explained by both the reaction with superoxide ion and other free radicals (the antioxidant effect) and the formation of an inactive iron-rutin complex (the chelating effect). The BN antioxidant activity in cell-free and cellular systems has also been studied.3,4 In this work we enlarged the study of antioxidant properties of BN and rutin to the ex vivo systems, investigating the effects of BN administration to rats with lung injury induced by asbestos fibers and the effects of rutin on free radical overproduction in iron overloaded (IOL) rats.

After rat sacrificing, the trachea was cannulated and the lungs were lavaged five times with 10 ml of HBSS at 37°C (pH 7.4). The lavage fluid was filtered through a nylon cloth, and the filtrate was centrifuged at 300 x g for 10 min. Cell content was determined in a hemocytometer and differential count was performed microscopically in the cell smears. To separate mononuclear and polymorphonuclear cells, the cell pellet was resuspended in 1 ml HBSS, layered carefully on Ficoll-Paque gradient (ρ = 1.077), and centrifuged at 600 x g for 40 min. The upper layer consisted of mononuclear cells (macrophages and lymphocytes) and the pellet contained granulocytes (mainly neutrophils). Macrophages were identified by staining for nonspecific esterase. Macrophage and neutrophil preparations were >95% pure and 98% of the cells excluded trypan blue. The isolated cells were resuspended and stored at 4°C in HBSS supplied with 5% fetal calf serum.

The lung tissue was dissected into small pieces, poured through the 3 mm holes for fibrotic wall separation, and homogenized thoroughly. The homogenate (10 mg) was incubated with 50 μM FeCl3 and 800 μM ADP in 1 ml of 0.1 M phosphate buffer (pH 7.4) at 37°C. The reaction was started by adding 40 μl of 7.5 mM NADPH in phosphate buffer. After 30 min incubation, the reaction was stopped by adding 1 ml of 15% trichloroacetic acid and 0.1 ml of 10 μM naphtol solution in ethanol. Then, 1 ml of 0.375% TBA solution was added, and the reaction mixture was boiled for 15 min. After sedimentation of precipitated proteins by centrifugation, the content of TBA reactive product was determined by measuring an absorbance at 535 nm.

The CL measurements on a Luminometer mod. 1251 (LKB, Sweden) were monitored at 37°C and continuous mixing on a programmed IBM computer. All experiments were carried out in dublicate. Each point was a mean of 3 or 4 independent measurements. A sample of 5×105 cells, 400 µM luminol or lucigenin, and 0.5 ml of HBSS (pH 7.4) were placed in the 1 ml polysterene cuvette, and the CL background was measured for 5 min. After that, CL was activated by adding PMA (10 ng) or opsonized zymosan (100 µg/ml). The CL-response was measured as a mean mV signal over the 10 s intervals for a 10 min period.

A sample of dried lung tissue (20 mg) was treated with 6 M hydrochloric acid (1 ml) at 100°C for 24 hours, filtered, neutralized, and vaporized. After that, a dry residue was dissolved in 1 ml of distilled water and incubated with 1 ml of 0.03 M chloroamine B in the mixture of acetate-citrate buffer and propyl alcohol for 5 min at room temperature. Finally, the reaction mixture was treated with 1 ml of 5% p-dimethylaminebenzaldehyde at 60°C for 20 min, and the content of hydroxyproline was determined spectrophotometrically at 558 nm.

The liver was perfused with 0.9% NaCl solution and homogenized with 1.12% KCl solution (1:3 v/v). The homogenate was cetrifuged at 1000x g for 20 min, then the supernatant was separated and centrifuged at 105000xg for 60 min. After protein analysis by the Lowry method, microsomes were immediately used in the experiments.

Peritoneal macrophages were prepared by peritoneal lavage with 2 ml prewarmed saline solution. The lavage fluid was filtered and centrifuged at 300xg for 10 min. Cells were resuspended, twice washed, and stored at 4°C in HBSS. Macrophage preparations were >90% pure and >95% of the cells excluded trypan blue.

Blood was collected from rat tail vein using heparin (5 U/ml) as an anticoagulant. Freshly obtained whole blood was separated by density gradient centrifugation with Ficoll­Hypaque. Granulocyte containing pellet was layed on dextran-metrizoate mixture for erythrocyte sedimentation. The isolated PMNs were washed twice with HBSS. The final leukocyte suspension contained more than 95% PMNs. Cell viability was maintained throughout all experiments as indicated by greater than 90% trypan blue exclusion.

Microsomes (0.5 mg protein/ml) were incubated with FeCl3 (50 µM) and ADP (800 µM) in 0.1 M phosphate buffer (pH 7.4) at 37°C. The reaction was started by adding 40 µl (7.5 mM) NADPH in phosphate buffer. A total volume of incubation mixture was 1 ml. After 30 min incubation, lipid peroxidation was terminated  by adding 15% trichloroacetic acid (l ml) and 10 mM ethanol solution of ß-naphthol (0.1 ml). Then, 0.375% TBA solution (1 ml)  was  added,  and  reaction mixture was heated at 100°C for 15 min. After centrifugation of precipitated proteins, the content of TBA reactive products was determined by measuring the absorbance at 535 nm.

2.12       Measurement of the Rate of Cytochrome c Reduction by PMA­stirnulated Neutrophils

All results are form the experiments carried out in dublicate or triplicate are presented as mean ±SD. Differences were analyzed using the Student’s t-test, the level of significance being set at P <0.05. Each point was a mean of three independent measurements.

3.1         Effects of Bio-normalizer on Lung Inflammation and Free Radical Processes in Asbestos-injected Rats

As shown in Fig. 1, BN administration to the asbestos-injected rats substantially decreased the wef lung weight on 14th and 28th days. Furthermore, BN administration decreased the recovery of neutrophils into broncho-alveolar space and enhanced that of macrophages (data not shown). BN administration drastically decreased hydroxyproline formation in the lung tissue, which characterized the intensity of asbestos-associated fibrosis (Figure 2), and completely annihilated the asbestos-induced enhancement of lipid peroxidation in the rat lung homogenate on 28th day after the beginning of experiment (Figure 3). At the same  time, the BN effect  on oxygen radical production by lung phagocytes was much more complicated. BN was found to be a very effective inhibitor of hydroxyl radical formation (determined by luminol-amplified CL) without affecting substantionally superoxide production (measured by lucigenin-amplified CL). Due to that, BN administration nearly completely suppressed a sharp increase in the luminol-amplified CL/lucigenin-amplified CL ratio on 7th day in the asbestos-treated rats (Figure 4).

3.2        The Effects of Rutin on Free Radical Overproduction in Iron-overloaded Rats

Rutin administration had no effect on the content of nonheme iron in both IOL and normal liver microsomes. Similarly, rutin did not affect the rate of lipid peroxidation in microsomes of control rats but significantly (by 4 times) decreased the level of TBA reactive products in IOL microsomes (Table 1). Rutin also practically did not change the content of nonheme iron in peritoneal macrophags from both IOL and control rats but strongly inhibited spontaneous luminol- and lucigenin-amplified CL produced by IOL macrophages. Furthermore, rutin administration to normal rats did not affect the rate of cytochrome c reduction by neutrophils, but this rate became equal to zero in the case of IOL neutrophils (Table 1). The effect of rutin administration on NADPH oxidase activity was uncertain.

Both animal models studied in this work, asbestos-induced lung injury and iron overloading, are the well-known examples of oxidative stress characterized by free radical overproduction.5-7 Therefore, we expected that due to possessing antioxidant and free radical scavenging activities, both chosen natural substances, BN and rutin, will be able to inhibit free radical overproduction and suppress its harmful action in these animal models. Comparison of objective symptomes of lung injury in the rats with and without BN administration as well as the parameters characterized the rat organism’s free radical status showed that BN indeed diminished significantly pathologic changes in the rat lungs induced by asbestos fibers instillation. Thus, the wet lung weight and the lung weight/rat weight ratio in the rats from Groups II and III approached these parameters for control animals from Group I (Figure 1). BN also sharply decreased the intensity of asbestos-associated fibrosis (Figure 2). It is important that BN administration suppressed the neutrophil attachment to the inflammatory loci and enhanced macrophage recruitment and macrophage phagocytic capacity. The inhibition of neutrophil-defined stage and the stimulation of macrophage stage of inflammation can explain the normalizing effect of BN in a variety of inflammatory pathologies. BN exhibited profound inhibitory action on free radical formation in lung tissue characterized by lipid peroxidation (Figure 3). However, what is more important, BN selectively inhibited the production of the most harmful hydroxyl radicals by lung phagocytes of asbestos-injected rats (Figure 4), which are supposedly an important initiation factor of lung damage.

Our investigation of the in vivo effects of iron showed that iron overloading in rats does induce oxidative stress, which is characterized by the oxygen radical overproduction in does liver microsomes, peritoneal macrophages, and blood neutrophils. This animal model permitted the study on the in vivo effects of rutin on oxygen radical production. The most surprising and unexpected result was a difference between its effects on normal and IOL animals. We believe that this fact demonstrates a different nature of the reactive species mediated damaging processes. Thus, rutin practically did not affect lipid peroxidation in normal microsomes but inhibited it by 75% in IOL microsomes (Table 1). Similarly, rutin was unable to inhibit spontaneous luminol- and lucigenin-amplified CL produced by macrophages or superoxide production by neutrophils from normal animals but strongly inhibited CL (by 2.5-3.5 times) produced by macrophages and completely suppressed superoxide production by neutrophils in the case of IOL rats. (It was impossible to estimate the effects of rutin administration on PMA-stimulated IOL macrophages due to a sharp decrease in the CL intensities).

Thus the ex vivo study of two natural antioxidants, Bio-normalizer and flavonoid rutin, in two different animal models of oxidative stress (asbestos-stimulated lung inflammation and iron-overloading) showed that both products are effective inhibitors of various harmful free radical-mediated processes. It was also found that these antioxidants are not only able to suppress overproduction of oxygen radicals but also selectively scavenge highly reactive hydroxyl  radicals  without  affecting   the  production   of physiologically important innocuous superoxide ion. These properties of BN and rutin make them  prospective pharmacologic agents. 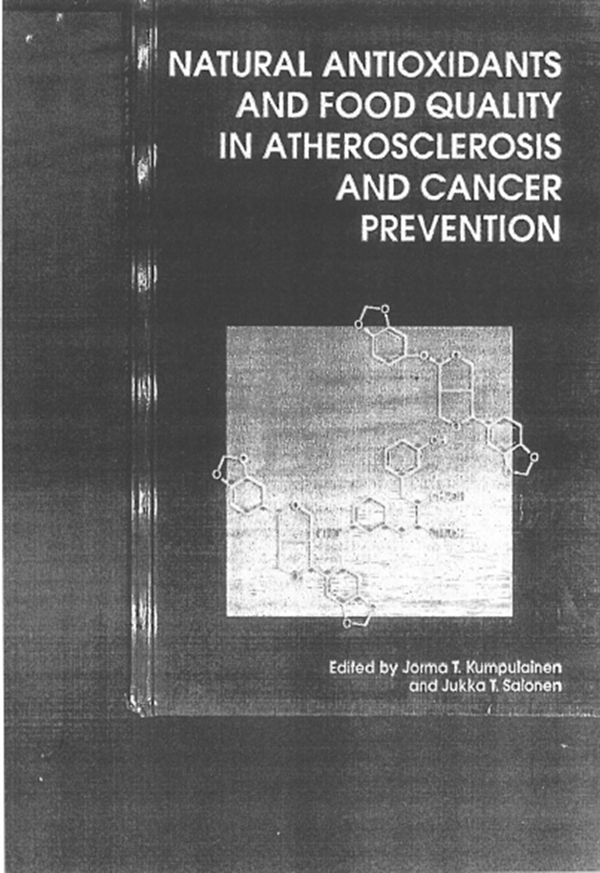