We investigated the relationship between human interferon (IFN) production and various diseases and found IFN- α production to be decreased in patients with cancer, diabetes, tuberculosis, etc, and ability of IFN- α production was inversely related to susceptibility to infection 1,2 . We also found that IFN- γ production was decreased in patients with cancer or hypogammaglobulinemia and increased in Hashimoto’s disease3,4. It is known that IFN- γ production involves human lymphocyte functions which differ from those reflected by IFN- α production. Thus, it is thought that IFN- α and – γ production is an effective parameter of individual immunological function. There is a correlation between Natural Killer (NK) activity and the condition of cancer patients, and it is well-known that IFN administration enhances that activity5,6. It is thought that the enhancement of these immunological functions might improve the general condition and the quality of life of these patients. The administration of IFN and the use of immunopotentiators can improve immunological functions, but their continuous use causes side-effects: unbalance of homeostasis, pyrexia, malaise, etc. We thought that lactobacillus might be a safe immunopotentiator. Lactobacilli have been eaten and used as health foods from ancient times. In vitro and in vivo, the activation of immunity and the antitumor activity of many lactobacilli have been described7,8,9. It has been reported that lactobacillus in the diet has the same action,10, 11. In this paper, we will describe the increased immunological potency of the subjects who recieved the diet with lactobacillus brevis subsp. coagulans isolated by Tsunataro Kishida.

Lactobacillus brevis subps. was cultured in PYG medium (1%  polypeptone, 1% yeast extra, l% glucose) for about 20 hr at 25-30°C, The bacteria were centrifuged and lyophylized, then mixed with dried potato starch and powdered. Tablets were made by the addition of an appropriate excipient to the powder. These tablets were kindly supplied by Yoshindo Co. , Ltd. (Toyama).

Six tablets per day were administered orally to healthy volunteers (4 males and 6 females, aged 25 to 65 years) for 4 weeks. Peripheral blood was drawn and placed in heparin tubes before administration and after 2 weeks and 4 weeks, and several tests were done (Table 1). IFN-α and- γ production, 2-5A synthetase activity at the time of IFN-α induction and changes of Natural Killer <NK) activity were also measured.

3. IFN-α and- γ  induction and measurement of their production

Heparinized peripheral blood was tested for IFN induction by the whole blood method. For the measurement of IFN- a production, 2 ml of whole blood was collected in a centrifuge tube. HVJ (Sendai virus) was added at a final concentration of 500 HA/ml. It was cultured for 20 hr at 37°C and then centrifuged at 3,000 rpm. Supernatants were harvested for the measurement of IFN-α production .

Heparinized peripheral blood was diluted 4 times in Eagle’s MEM, and PHA-P (25 µ g/ml, Sigma) was added. After 48 hrs of culture at 37°C, it was centrifuged at 3,000 rpm and the supernatants were harvested as IFN- γ samples.

4. Measurement of 2-5A synthetase activity

Peripheral mononuclear cells were isolated from heparinized peripheral blood by the Ficoll-plaque method, and effector cells were obtained. K562 cells labeled with Cr151 as target cells were mixed with the effector cells in an E/T ratio of 20:1. Cytotoxicity was measured by the conventional method.

The tests listed in Table 1 were performed before and 2 and 4 weeks after the start of Lactobacillus brevis subsp. coagulans ingestion. No major deviation from the standard values was found (data not shown).

IFN- α production in each individual is shown in Figure 1., before and 2 and 4 weeks after the start of administration. At 2 weeks, IFN-α production was increased in 7 of the 10 subjects, unchanged in 2 and decreased in 1. At 4 weeks, it was increased in 6, unchanged in 3, and decreased in 1. The average values were 6, 262 uni ts/ml before administration, 10,350 uni ts/ml at 2 weeks and 9,959 units/ml at 4 weeks. The values at both 2 and 4 weeks were increased significantly <P<0.05). The blood tests of the individuals whose IFN- a production decreased were examined in detail, but no abnormalities were found.

4. Changes in 2-5A synthetase activity

Significant increases in the parameters of immunological function, IFN- α production, 2-SA synthetase activity and NK activity were confirmed in subjects given a preparation of lactobacillus brevis subsp. coagulans. In a few individuals, IFN- a production decreased, but 2-5A synthetase activity and NK activity increased, and all subjects showed a tendency for some parameters to increase.

The result of blood tests did not change, and no side-effects were noted. Cholesterol has recently been reported to be lowered by lactobacilli in the diet, but no change in cholesterol was detected in this experiment, perhaps because all the subjects had normal cholesterol values and 4 weeks was not long enough to show a change. Longer-term examinations are necessary.

By what mechanism does Lactobacillus brevis subsp. coagulans enhance immunological functions? The results of this experiment suggest 2 possibilities:

1) Intestinal digestion and absorption are improved by changes in the intestinal bacterial flora causing a better general physical condition.

2) Lactobacillus brevis subsp. coagulans may induce IFN or have a priming effect on IFN induction.

Decreased IFN- α production had been reported in patients with diabetes or cancer and their increased sensitivity to infection is well known. So, an increase in IFN- a production may prevent infection or improve the immunological function of cancer patients. 2-5A synthetase is the enzyme which is produced when IFN is induced by virus infection, etc., or when IFN is administered in vivo. Hepatitis B patients whose 2~5A synthetase activity is increased by IFN- a administration have a better therapeutic effect 12), 1 4).

Although it is thought that enhancement of 2-5A synthetase activity at the time of induction of IFN- a production with Lactobacillus brevis subsp. coagulans preparation in the diet increases the activity of IFN-producing cells, further examinations are needed. NK activity plays an important role as one of the anti-tumor factors. It has been reported that patients operated on for lung cancer survive longer if they have high NK activity15). Thus, increased NK activity is also important as one of the parameters of increased immunological function. No significant change was found in IFN- γ production in this experiment, probably because IFN- γ production is high in autoimmune diseases and low in immunodeficiency syndromes, and it is thought to be correlated closely with lymphocyte function. On the other hand, IFN- α production and NK activity are non-specific immunological functions. In conclusion, Lactobacillus brevis subsp. Coagulans preperation appears to activate non-specific immunological functions. 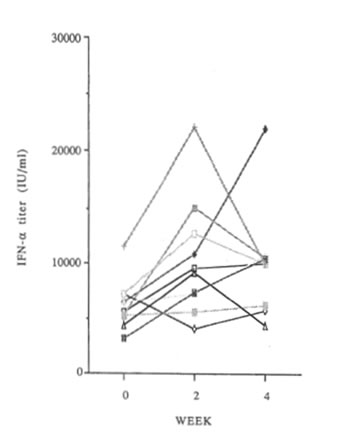 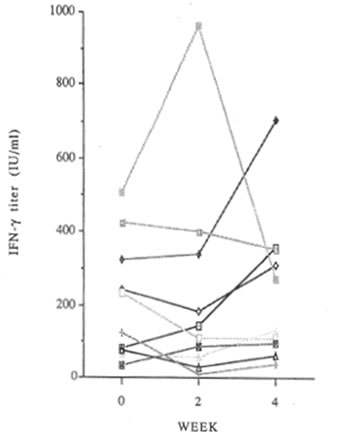 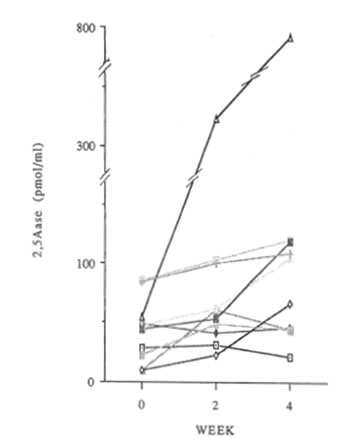 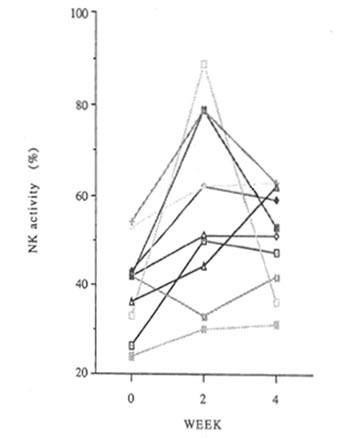