(OR14) EFFECT OF BIO-NORMALIZER ON WOUND HEALING IN EXPERIMENTAL RATS

EFFECT OF BIO-NORMALIZER ON WOUND HEALING IN EXPERIMENTAL RATS

Wound healing is a complex biological process transforming injury into healed scar. Such process involves an orchestration of numerous cellular responses and a balance interaction of immuno-regulatory cells, tissue collagen synthesis and remodeling and angiogenesis. Evoking these various cellular responses are the main roles of various cellular components participating in wound repair. These cells such as macrophages, neutrophils, lymphocytes, platelets, keratinocytes, and many other blood and tissue cells, are responsible for the elaboration and synthesis of various cytokines which provide the necessary communication at the cellular level of wound healing.1

In addition to this, free radical scavengers like dimethylsulfoxide and alpha-tocopherol are being employed to enhance cutaneous wound healing especially in free radical-mediated wound impairment.22 The involvement of these free radicals in various facets of pathologic wound healing has been studied extensively. However, the effect of free radicals on normal wound healing is yet unclear.

Since Bio-Normalizer (BN) was proven to have free radical regulating and modulating activity, this study investigated the effect of this biologically active compound on normal wound healing of experimental rats.

Twenty healthy adult male Sprague-Dawley rats weighing 300 – 350 grams were obtained from the Bureau of Animal Industry, Alabang, Philippines. The animals were housed in an animal laboratory in a Manila university. The animals were kept in aluminum cages (5 rats/cage) and a 12-hour light and dark cycle was observed. Food and water were supplied ad libitum. The experimental animals were taken cared of in accordance with the guidelines set by the institutional committee regarding studies employing the use of experimental animals.

On the day of surgical wounding (Day 0), all rats were anesthetized with 4 mg/kg Thiopental Sodium (Penthotal Sodium, Abbott-Metro Laboratories, Inc. Manila, Philippines) intraperitoneally. The abdomen was shaved and a midline vertical incision was done and carried through the panniculus carnosus 4 cm in length. The incision was closed by simple interrupted suture using Silk 4-0. No dressing was applied and the surgical wounding was performed under strict asepsis and anti-sepsis. Sutures were removed on the 3rd day post-wounding without anesthesia.

Preparation for light microscopy and semi-quantitation of collagen deposition

On Day 0, skin biopsy measuring 4 mm x 4 mm perpendicular to the wound was taken at the cephalad end which served as the baseline sample. Subsequent biopsies were taken at the middle and caudal end of the wound for Day 6 and Day 12, respectively. All biopsies were done under Thiopental anesthesia. The skin samples were fixed in 10% phosphate-buffered formaldehyde. The samples were divided into two. One half was stained with hematoxylin and eosin. The other half was stained with specific stain for collagen fibers using the methods of Von Gieson and Weigert.25 Two independent dermatopathologists examined the slides in a coded fashion. An arbitrary scale of Grade 1- 4 was used to assess semi-quantitatively the degree of collagen synthesis and fibroblast cellularity (Table 1). The average of the two observers was used as the grade assignment.

Skin biopsy was also collected at Day 0 and Day 12 from similar incision on all rats measuring 4 mm x 4 mm and perpendicular to the long axis of the incision scar. The collected specimen was minced and fixed in 2.5% glutaraldehyde in 0.1M phosphate buffer (pH 7 .4) for 24 hours, post-fixed in 1% OsO4 in distilled water for 1 hour, then dehydrated through epoxy resin. Test areas from where collagen fiber diameter measurements were made were identified through light microscopic examination of one micron plastic sections in order to specifically exclude adjacent normal dermis. Then, 100 run (silver) sections were cut on a LKB ultramicrotome, stained with lead citrate and uranyl citrate and photographed by using an EM “HU-RA” (magnification x 12,000) and obtained negatives were additionally enlarged by 16 times. EM magnification was standardized by using replica of diffraction-grate. Collagen fiber diameter (CFD) measurements were taken from 50 collagen fibers from each specimen and carried out close to an active fibroblast. All collagen fibers measured from each specimen taken from each group were included for morphometric and statistical analysis. Sample preparation and embedding were performed at the Natural Science Research Institute, University of the Philippines, Diliman, Quezon City, Philippines. After completion of specimen collection and preparation, the embedded samples were sent in coded labels for electron microscopy.

Electron microscopic findings showed no significant difference in fibroblast morphology between the two groups. Fibroblasts taken from both groups showed similar characteristics and activity. Initial measurement of CFD in both groups showed no significant difference at Day 0. This connotes that samples taken from each group showed homogeneity. However, a significant decrease in CFD measurement was noted in both groups between Day 0 and Day 12 samples (p<0.05). Significant difference was noted in the CFD measurement between the control and experimental groups at Day 12. Mean CFD in experimental group was significantly greater than the control group (56± 12 vs. 52.1 ± 12 nm, p < 0.05). Some samples were found to be poorly prepared and staining with lead citrate and uranyl citrate for electron microscopy were not carried out. Such samples were discarded and were not included in the CFD measurements (Table 3).

Normal wound healing proceeds through an orderly cascade of events which are geared towards creating a normal structure-function relationship.26 Such process of wound healing occurs in varying time frames, depending upon the length of these cellular events, how orderly such interplay occurs and the different factors affecting wound repair and healing in general.

These factors affecting wound healing and repair have been studied extensively in the past. But little is understood about the effect of oxidative stress in normal wound healing. The injurious effects of oxygen radicals to cutaneous structures have been well-documented and occur in various skin conditions such as damage by ultraviolet radiation and the phototoxicity of porphyria, certain tetracyclines and benoxaprofen.27

However, oxygen free radical production in mammalian systems is not at all deleterious. Such active oxygen species can also provide these cellular systems with very important physiological properties. They can provide defense mechanism against exogenous bacterial contamination,28,29 serve as adaptogenes by inducing endogenous free radical defense systems30 and stimulate growth, maturation and differentiation in a variety of mammalian cell.31 Thus, the ability of oxygen free radicals to cause injury to mammalian cellular systems does not depend on the level of active oxygen species present but on the absence or presence of balance in the organism’s free radical homeostasis.

Normal wound healing process of surgical incision is not at all innocuous. Initial response to a surgical injury is a clot with platelet aggregation and activation followed by release of alpha-granules, which contain PDGF and TGF-beta and other chemotactic factors. These cytokines and wound growth factors are chemo attractant to the PMN leukocytes which migrate into the local wound area and start the phagocytosis of local clots.26 In the process of phagocytosis of local clots and cellular debris, these PMN leukocytes release superoxide radicals.32 As more and more PMN leukocytes are recruited into the wound site, more superoxide radicals are formed and the homeostatic balance of free radicals in the body is deranged which can exert injurious potential on other cellular mechanisms involved in wound healing and repair.

In this study, as seen also in the study of Devereux et al,33 surgical wounding produced significantly collagen fibers with smaller diameter than that seen in unwounded skin (Figure 1). Such failure to produce collagen fibers with similar diameters as in unwounded normal skin is responsible for the inability of normal wound healing mechanism to achieve the functional characteristics of an intact skin. The reason behind this is yet unclear. But we can only hypothesized that in this model of normal wound healing where other factors for wound impairment are absent, the inherent oxidative stress brought about by the inflammatory challenge secondary to the surgical incision caused the significant attenuation of the normal healing potential.

The cytotoxic oxygen species produced by PMN leukocytes such as superoxide radical and hydrogen peroxide can affect wound healing directly and indirectly. Collagen, together with other extracellular matrix structural macromolecules like proteoglycans and elastin are easily degraded by oxygen radical attack.34,35 Such damage can be potentiated by the activation of latent collagenases by oxidants causing further degradation of collagen.

Indirectly, the significant levels of oxygen free radicals achieved during the inflammatory phase may be cytotoxic to other cellular components in wound healing like the platelets, WBC and macrophages which are rich sources of local wound cytokines and growth factors. They provide the important proliferative signals to fibroblasts and epidermal cells to perform their synthetic and regenerative functions to promote wound healing.26

In order to elucidate the effects of free radicals in wound healing, Korkina et al [unpublished data], measured the level of free radical production in experimental rats at 3-day interval using Luminol- and Lucigenin-dependent chemiluminescence technique. Normal rats surgically wounded gave higher value on spontaneous and latex-activated chemiluminescence reactive up to the 10th day post-wounding. Maximal production of oxygen free radicals corresponds to the inflammatory response. During inflammation, PMN leukocytes produce significant release of oxygen free radicals which serve as chemoattractants thereby affecting more PMN leukocytes. This response was observed on the 3rd day post-wounding and continuously increased until the 10th day. As the inflammation subsides, the level of free radical generation starts to decline until it reaches its previous level prior to wounding.

However, biologically active substances can influence oxygen radical production. These agents can inhibit neoplastic events at the cellular and molecular levels,37 decrease the damages induced by ischemia-reperfusion,38,39 diminish the inflammatory changes,40 and prevent various environment associated pathology.41 The therapeutic and preventive action of such agents may be due to the regulation and maintenance of a normal free radical status in the organism.

BN is a complex mixture of biologically active components (yeast cell, glucose, antioxidant enzymes and amino acids) proven to have both inhibitory and stimulatory effects on free radicals.42 Thus, the balance of oxygen free radicals achieved in the wound site could enhance significantly the process of wound healing.

In this study, BN enhanced wound healing by enhancing collagen synthesis and deposition as measured semi-quantitatively using specific collagen staining methods and quantitatively using collagen fiber diameter measurement by electron microscopy. The ability of BN to enhance wound healing is due to its regulatory effect on normal free radical homeostasis (Figure 2). This regulatory effect is secondary to its ability to quench free radicals directly, convert hydroxyl radicals into innocuous superoxides, diminish the inflammatory change and delimit sources of free radical production. Lastly, the homeostatic balance of free radicals especially that of superoxides enhances the proliferation of various mammalian cells participating in wound healing such as phagocytes, leukocytes, platelets, fibroblasts and keratinocytes.

Bio-Normalizer as shown in this study caused these cells to proliferate markedly although the results were only significant for platelets. The proliferation of these cells is brought about by the normalizing activity of BN on the level of superoxides in the blood and other tissues. It was shown that the optimal level of superoxides can cause bone marrow cell proliferation.42 This is in turn responsible for the increased production of WBC and platelets which are rich in cytokines and growth factors (Figure 3). However, the direct effect of BN on the wound cytokines and growth factors is still under laboratory investigation.

In this study, the oxidative stress involved in normal wound healing as inflicted by surgical incision in experimental rats was characterized and the effect of Bio-Normalizer, a proven agent with regulating activity on free radical production was investigated. Bio-Normalizer enhanced collagen synthesis and deposition in normal process of wound healing in experimental rats through its modulating and regulating activity on free radical production and proliferative effect on cellular components participating in normal wound healing.

Table 1. Scale to assess the collagen synthesis and fibroblast cellularity 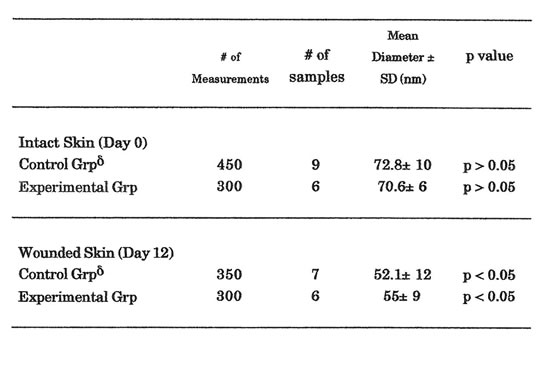 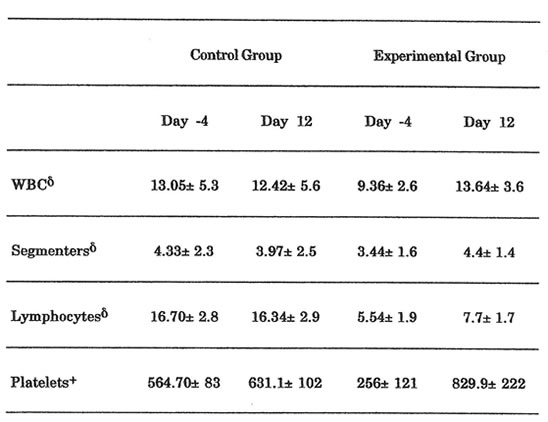 Only in platelet count that a statistically significant elevation between the 2 groups was noted (p<0.05) 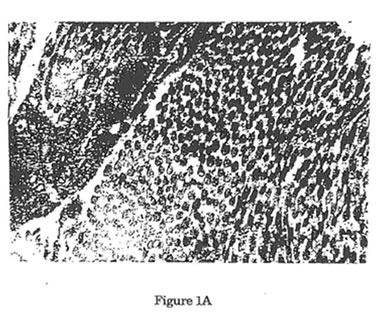 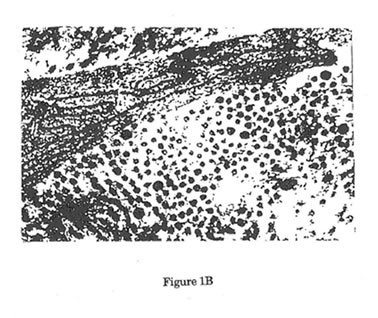 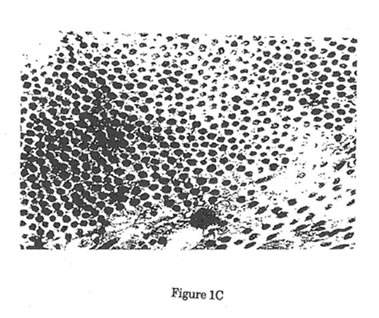 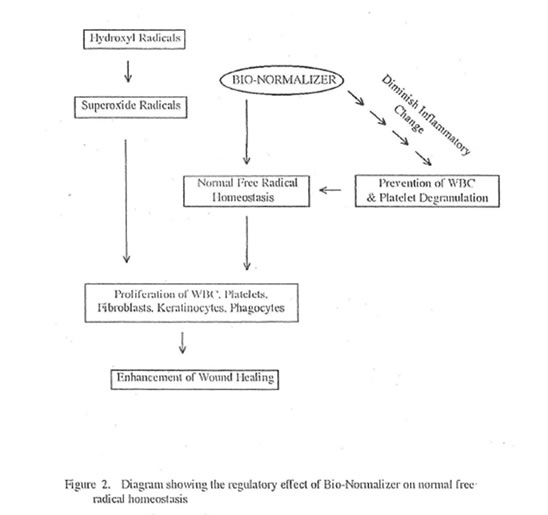 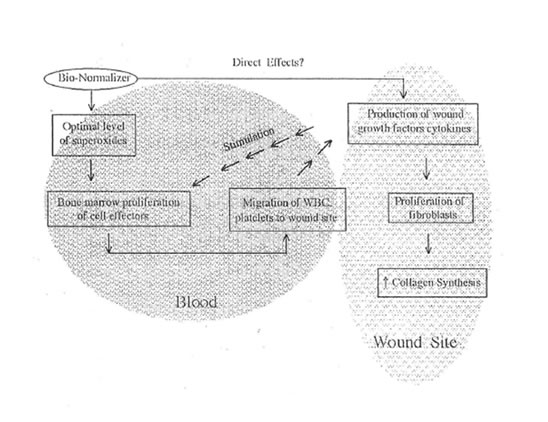