As demonstrated in a number of studies through the electron spin resonance (ESR)/spin trapping (1-4), the role of Bio-Normalizer as a free radical scavenger has led to the continuous investigation of its bioactive components giving antioxidant protection against oxidative damage of cells and tissues.

Its diverse and wide-ranging biological and physiological actions as have been elucidated, paved the way for the characterization and identification of the bioactive components in Bio-normalizer. There is still meager data on its antioxidative contents and here we study Bio-normalizer in detail with reference to its antioxidant defenses.

The present work involves the detection of non-enzymatic and enzymatic constituents of Bio-normalizer responsible for its ability to react with reactive oxygen species and its derivatives.

Sample: Bio-normalizer is a functional fermented health food supplement from yeast fermentation of papaya and other tropical herbs and traditional foodstuffs of Japan and produced commercially by Sun-O International, Inc., Gifu, Japan.

Chemicals: The reagents and chemicals used were of the highest grade available from commercial suppliers.

Biochemical analysis: By reverse phase HPLC utilizing the phenylisothiocyanate labeling method as described in the PICO – Tag manual (Millipore Waters Chromatography, Tokyo, Japan), the amino acid contents were identified. The glutathione which has the ability to react with oxidants was determined by the method of Schreurs, M., et al.(5). Protein concentration was analyzed by the method of Lowry, O.H. et al.(6) with bovine serum albumin as standard. The presence of catalase and peroxidase were determined by titration as explained in the Official Methods of Analysis of the Association of Official Chemists (7). Superoxide dismutase was assayed in terms of its ability the reduction of cytochrome c by milk xanthine oxidase and xanthine (8) and by SOD 525 kit wherein the alkaline autoxidation of a chromogenic reagent is accelerated by the presence of SOD (9). The metals such as manganese, copper, zinc and iron associated with SOD were determined using atomic absorption/flame emission spectrometry (Shimadzu, Kyoto, Japan). Solutions of these metal salts were used as standards.

system at 45 mg/ml. Five percent of DMPO-O2– spin adducts (27 x 1015 spins/ml) generated by hypoxanthine-xanthine oxidase system and 11% of 1,1-diphenyl-2-picrlhydrazyl radicals (7 x 1015 spins/ml) were quenched using 25 mg/ml of BN (1). Its hydroxyl radical scavenging constituents consists of four water-soluble fractions with varied molecular weights (ranging from less than 10,000 up to more than 200,000) which are stable to heat (100°C for 60 min exposure) and pH 1.2 (2). As stated in previous report, the yeasts are likely the free radical quenching constituents of BN with concentration ranging from 1-5 x 105 cells/g sample (1). Antioxidants like glutathione, superoxide dismutase (SOD), catalase and peroxidase have been found in yeasts (10). It is interesting to note that in this present study, these antioxidants with varied molecular weights were detected in traceable amounts using 500 mg/ml concentration of BN with total protein of 6.5 mg/ml (1.3% protein). The glutathione as investigated by flourescence spectroscopy has concentration of 7.1 x 10-3 mg/ml (0.0014%). The specific activities for catalase and peroxidase (having molecular weights above 200,000) were measured based on K=Kobs/c (L./g-sec) where K obs=1/t log e (SO/S) (sec-1); SO is the conc. of H2O2 at zero time; S is the conc. remaining at t secs and c is the conc. of sample.(8) The values, 0.1 L/g-sec and 0.15 L./g-sec are the catalase and peroxidase activities of BN, respectively. Based on ferricytochrome c reduction assay, the SOD present has value of 1.0 unit/mg protein while using the SOD 525 kit, the activity determined was 1.379 units/mg protein (S.D. 0.1885). Low activities were obtained but these findings showed that BN has some ability in quenching superoxide radicals. Metals such as manganese, zinc, copper and iron associated with this enzyme were investigated by the atomic absorption spectroscopy. Presence of manganese was detected at 0.00059 mg/ml and Fe at 0.00072 mg/ml. The data may suggest that the metalloenzyme-SOD in BN is either Mn-SOD or Fe-SOD. Furthermore, previous study conducted by Osato, J.A., Santiago, L.A. et al. on papaya, a major component of BN which contains known antioxidants such as malic acid citric acid and glucose, revealed that its seed, meat and pulp exhibited scavenging actions against various radicals like DPPH, hydroxyl and superoxide (11). These contents of papaya may in part explain why BN is a potent free radical scavenger. The analysis of amino acids by reverse phase liquid chromatography showed that BN has amino acids, of which five such as methionine, arginine, threonine, tyrosine and lysine have been claimed as having antioxidant properties. The hydroxyls, thiols and sulfhydryl groups of these amino acids may have some ability in scavenging oxygen free radicals (12). A summary of results on the possible antioxidant defenses of BN is presented in Table 1. At present, separation and purification of bioactive substances (simple and complex ones) are underway. 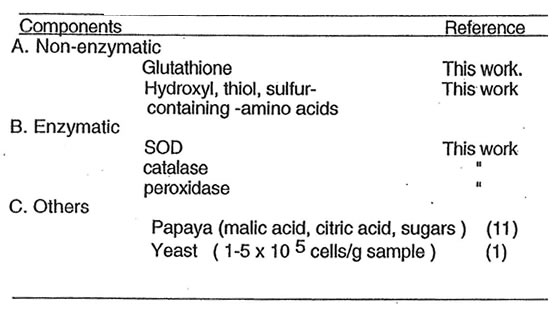 In view of the current data, it is reasonable to conclude that Bio-normalizer is effective in protecting cells against the toxicity and mutagenicity of active oxygen species by virtue of its capacity to scavenge free radicals. The antioxidant components may be attributed to the non-enzymatic and enzymatic constituents of Bio-normalizer varying from low to high molecular weights. Among these are the glutathione, SOD, catalase, peroxidase, hydroxyl, thiol and sulfhydryl-containing amino acids.