The meat, seed and pulp of Carica papaya Linn., a popular traditional medicinal herb grown in the tropics, was shown by the agar-cup method to be bacteriostatic against several enteropathogens such as Bacillus subtilis, Enterobacter cloacae, Escherichia coli, Salmonella typhi, Staphylococcus aureus, Proteus vulgaris, Pseudomonas aeruginosa, and Klebsiella pneumoniae. The same parts of papaya were unequivocably demonstrated by electron spin resonance spectrometry to scavenge 1,1-diphenyl-2-picrylhydrazyl (5.8 x 1014 spins/ml), hydroxyl (5.1 x 1014 spins/ml) and superoxide (1.2 x 1014 spins/ml) radicals with the seed giving the highest activity at concentrations (IC50) of 2.1, 10.0 and 8.7 mg/ml, respectively. The superoxide dismutase (SOD)-like activity in the meat, seed and pulp amounts to about 32, 98 and 33 units/ml; comparable to those of soybean paste miso, rice bran and baker’s yeast. Vitamin C, malic acid, citric acid and glucose are some of the possible antioxidative components in papaya. Our study correlates the bacteriostatic activity of papaya with its scavenging action on superoxide and hydroxyl radicals which could be part of the cellular metabolism of such enteropathogens. This is  indicative of the pathophysiological role of these reactive oxygen species in gastrointestinal diseases and papaya’s ability to counteract the oxidative stress.

The use of plants with bioactive compounds in humans has become one of the most important yet conservative approaches in preventive medicine. Although more than 6,000 antibiotics have been discovered so far from various plant materials (1), none guaranteed absence of side-effect and antibiotic resistance to the host organism – inciting a continuing search for clinically useful natural antimicrobial agents. Few studies have linked these antimicrobials as potential antioxidants and scavengers of reactive oxygen species (ROS). The metabolism of enteropathogens caused the production of superoxide and hydrogen peroxide which react, and aided by the presence of iron in feces, efficiently generate hydroxyl radicals. This intracolonic free radical formation may explain the high incidence of cancer in the colon and rectum (2). The same group of researchers have demonstrated that superoxide and hydrogen peroxide generated by activated leukocytes form hydroxyl radicals through Fenton reaction resulting in direct membrane disruption by lipid peroxidation (3). Van der Vliet et al. have also shown that the production of ROS may cause an increased permeability of the endothelium and mucosa, allowing infiltration of inflammatory leukocytes into the ischemic area of the intestine. They proposed that scavenging of ROS will be beneficial  in intestinal diseases (4).

To further explain scientifically these anecdotal therapeutic cures of papaya, we studied its antimicrobial activity on some gastrointestinal disease-causing enteropathogens and its antioxidant activity. Using unripe papaya, we have previously demonstrated that it exerts antioxidant protection on superoxide, hydroxyl and 1,1-diphenyl-2-picrylhydrazyl radicals (6) in line with other findings (7). In another light, this study was also prompted by the unpublished clinical reports on Bio-normalizer (BN), a fermented food supplement of which a major component is papaya, and its purported therapeutic action on some of the above-mentioned diseases and disorders. BN is a hydroxyl radical scavenger (8) and an inhibitor of neuronal lipid peoxidation in a number of experimental animal models (8-10). We also compared the antioxidant action of the different parts of papaya to its known antioxidative components such as vitamin C, malic acid citric acid and glucose. Further, we compared papaya’s antioxidant activity to soybean paste miso, rice bran and baker’s yeast.

Plant sample: A 2-3 week old Philippine variety of Carica papaya Linn. (pawpaw) which originated from tropical America was used. The fresh meat, seed and pulp of papaya and the mixture of these three parts were osterized in a waring blender. The supernatant was used.

Medium and culture conditions: Assay medium contained 3.0 g beef extract, 5.0 g peptone, and 2% agar in one liter of distilled water, pH 7.0. A 24-h culture of the microorganisms incubated at 37oC was used in the study.

Screening for antimicrobial property: The inoculum density of the bacterial suspension was standardized at 3 x 108 organisms/ml by comparing it with the barium sulfate standard by the turbidimetric method (11). The seeded nutrient agar contained 1% inoculum and all trials were done in triplicates. Agar-cup method was employed for the antibiotic assay.

Analysis of free radicals: The details of the analysis of DPPH, hydroxyl, and superoxide radicals by ESR spectrometry (JEOL, JES-FE1XG, Tokyo, Japan) were given in previous reports (6,8,12-24).

Analysisof SOD: Analysis of SOD activity was performed by ESR spectrometry (9,15). The osterized papaya juice was centrifuged at 2,000 rpm for 15 min and the supernatant was used. Fifty microliters of 2 mM hypoxanthine,  ,35 ml of 11 mM DETAPAC, 50 ml of the supernatant, 15 ml of DMPOand 50 ml of freshly prepared xanthine oxidase (81.6 ml in 5 ml of phosphate buffer, pH 7.8) were mixed and sucked in a 169 ml-volume capacity special flat cell (JEOL, Tokyo, Japan). The spin adduct of superoxide radical (DMPO-OOH) was recorded exactly after 1 min of mixing the xanthine oxidase. A standard SOD curve was prepared from different diluted concentrations of SOD in 0.1 M sodium phosphate buffer (pH 7.4). Manganese oxide was used as an internal standard. The spin number was calculated from the ratio signal height intensity of 2,2,6,6-tetramethyl-4-hydroxyl piperidine-1-oxyl with known spin number. The SOD-like activity was expressed as unit/ ml.

The mixture of unripe papaya comprising the meat, seed and pulp was bacteriostatic at a concentration of 500 mg/ml against several standard culture of enteropathogens such as Staphylococcus, Escherichia, Proteus, Salmonella, Klebsiella and Enterobacter. Instead of zones of inhibition, thinning of growth was observed and measured at 500 mg/ml. This minimum inhibitory concentration (MIC) for papaya extract also impaired the growth of Bacillus subtilis (Table 1).

The same parts of unripe papaya were unequivocably demonstrated by ESR spectrometry to quench DPPH, hydroxyl and superoxide radicals. The IC50 of antioxidants and food substances with antioxidant properties is summarized in Table 2. Among the pure antioxidants, vitamin C appears to be the most potent on the three radicals followed by vitamin E. Citric acid shows the highest hydroxyl radical scavenging ability while baker’s yeast seem to be the best among the natural food antioxidants although papaya was the only one evaluated based on wet weight basis. Table 3 shows the SOD-like activity of the different papaya parts in comparison to other naturally occurring food antioxidants such as soybean paste miso, rice bran and baker’s yeast. The seed of papaya gave the highest enzyme activity (based on ESR spectrometry and spin trapping technique) among the different papaya parts and other food antioxidants.

Antimicrobial activity of a mixture of unripe papaya (Philippine variety)

*values are averages of three trials. The minimum inhibitory concentration (MIC) of papaya used is 500 mg/ml.

Concentration of antioxidants/scavengers required to eliminate 50% (IC50) of the generated free radicals. 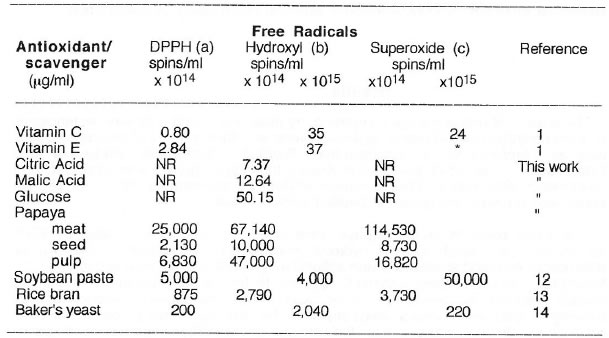 Except for papaya, all samples were analyzed in dry state. *Based on the ability of the food antioxidants at a concentration of 25 mg/ml to dismutate the superoxide radicals generated from hypoxanthine-xanthine oxidase system.

Our data shows that the mixture of meat, seed and pulp of unripe papaya has bacteriostatic property, although weak at 500 mg/ml (based on fresh weight basis of the plant material), against several major human enteric pathogens and Bacillus subtilis (Table 1) through maybe inhibition of either the bacterial cell wall synthesis or protein synthesis. The extract of unripe papaya is most sensitive to Escherichia, Enterobacter and Klebsiella. In addition to impairing the growth of these enteropathogens, the different parts of unripe papaya were found to scavenge various radicals such as DPPH, hydroxyl and superoxide. As part of the bacterial metabolism, ROS such as superoxide and hydrogen peroxide are generated in the presence of hemoglobin-, blood- and feces- containing iron may produce hydroxyl radicals. The ensuing oxidation disrupts the membrane through lipid peroxidation. Colonization, penetration and proliferation of bacteria within the intestinal mucosal epithelium may cause lesions, abscesses, bleeding, secretion of toxins and production of ROS. Stopping or halting the growth of these enteropathogens through papaya’s bacteriostatic action corollary implies inhibition of the production of ROS thereby arresting or slowing down the progression of such gastrointestinal diseases. There is convincing evidence to suggest that ROS are generated in various gastrointestinal pathologies such as intestinal ischemia and reperfusion (16), hemorrhagic shock (17), gastrointestinal inflammatory diseases (18), acute pancreatitis (19), inflammatory bowel diseases (20), xenobiotic metabolism (21), colon cancer (2), and ulcerative colitis (3), among others. The scavenging of ROS at this stage appears beneficial in these diseases (4) as the status of the oxidation-reduction potential of the intestinal microflora is maintained. In the case of unripe papaya, its antioxidant property (IC50) is more than ten-fold higher than its antimicrobial activity (MIC). While all antimicrobials have limitations on their antimicrobial spectra, the antioxidants are far-reaching and may be beneficial in the prevention of free radical-induced diseases including those of microbial origin.

Daley et al. has characterized the low molecular weight protein components of papaya, which are similar to purothionins, as heat- and acid-tolerant and have physiological functions related to redox activity (22). Benzyl isothiocyanate, a mustard oil produced by enzymatic hydrolysis of benzyl glucosinolate by thioglucosidase in papaya (23) is suggested to possess antimicrobial activity. The latex of immature fruit of papaya which is used as amebicide in Central America (24) has the proteolytic enzyme papain and potassium benzyl glucosinate (23). Papaya’s antioxidative components are attributable to its vitamin C content, malic acid, citric acid and glucose (Table 2). The SOD-like activity of unripe papaya, which provides the first line of antioxidant defenses against superoxide radicals, is comparable to those of baker’s yeast, soybean paste miso and rice bran (Table 3). While its SOD-like activity has yet to be purified, it is worth noting that SOD compounds have been purified from a number of plant origins, namely: Fe-SOD from tomato and mustard; Mn-SOD from maize and pea; and Cu, Zn-SOD from green pea, maize, wheat germ, spinach chloroplast, pea and corn seedlings, cucumber and green pepper (25). The monosaccharides-, saccharose-, levulose- and levulinic acid- contents of papaya may also contribute to its antioxidant property (5,6,14,25). These antioxidants in papaya may in part explain why BN which has papaya as its base material is a potent hydroxyl radical scavenger and inhibitor of lipid peroxidation (8-10). In addition, BN was found effective in stopping the growth of several facultative isolates from 84 gastrointestinal specimens of patients suffering from gastric ulcer, amoebic colitis, diarrhea and hemorrhoids (unpublished data).

Our study correlates two significant pharmacological activities of unripe papaya, as a bacteriostatic agent and as an antioxidant. The study further suggests that papaya may be an important inexpensive clinical agent on gastrointestinal problems of microbial origin.

The authors would like to extend their gratitude to Drs. Fortunato Sevilla III and Gloria de Castro-Bernas of the University of Santo Tomas Research Center for the Natural sciences, Manila, Philippines.