Preliminary Study on the Effect of Bio-Normalizer in Rodent Malaria

The evolution and rapid spread of drug resistant Plasmodium falciparum malaria in the last 40 years has diminished whatever available effective antimalarials exist in the treatment armamentarium worldwide.  Multi-drug resistance is a real problem in South East Asia, and the worsening drug resistance in Africa accounts for high morbidity and mortality especially in the under 5 age group.  Likewise, in low transmission areas, drug resistance also compromises vector control efforts instituted by malaria control programs. This necessitated R & D with other synthetic or naturally occurring products, as well as possible antimalarial drug combinations.

Other pre-clinical in vitro studies on bacterial isolates from rectal and gastric exudates of patients with enterocolitis, diarrhea and gastroenteritis showed antimicrobial activity of Bio-Normalizer, with 89% thinning of growth of isolates. These results suggest that BN has the potential to stop the growth of commonly encountered pathogens in the gastrointestinal tract (Osato, JA, Bernas G, Remo G et al,, 1994).

One clinical study in Papua New Guinea documented the product to be highly effective clinically against malaria (Wangi et al,, 2003, manuscript in preparation).  The 5-day in vivo study looked at the safety and efficacy of 100 mg/kg/day Bio-Normalizer given over three days to patients with acute uncomplicated P. falciparum malaria. Results showed 15/16 (94%) Adequate Clinical and Parasitological Response (ACPR) by Day 4, with persistence of fever in one patient.  It was a crude and rapid assessment of BN with a very small number of patients observed over 5 days, to form the basis for a bigger clinical trial.

In the absence of other pre-clinical or clinical studies against parasitic/protozoan infections using this product, this study was done to validate the efficacy of Bio­Normalizer in an animal model using BALB/c mice infected with Plasmodium berghei malaria.

Mice were bred and reared at the Research Institute for Tropical Medicine (RITM) Veterinary Research Department. All safety precautionary procedures were observed for experimental infection, following the guidelines of and with approval from the Institutional Animal Care and Use Committee (IACUC) following the rules stipulated in Department of Agriculture Administrative Order No. 40.

Three groups of specific pathogen-free (spf) 6-week old BALB/c mice (5 per group) were prepared.  Healthy mice of appropriate weight 16-18 gms, all female, were acclimatized for 1 week prior to inoculation. The animals were given treated clear water daily and the necessary veterinary care management, with each group caged separately and kept in a separate room to avoid any cross infestation of other animals in the veterinary lab.

This is the standard sample size of mice (6-8 per group) in preliminary animal experimentations.  The 3 groups are:

Preparation of parasite inoculum.  Procedures for parasite preparation and mice inoculation or infection as described by Cox FEG, 1998, were followed. Cryo-preserved P. berghei was thawed using sterile 1.6% Na Cl (Baxter/Fenwal, 4B7870) at 37°C for 1-2 minutes. The infected blood was then transferred to 50-ml centrifuge tubes with a sterile Pasteur pipette.  The blood volume=V was measured, and then added 0.1x V of 12% NaCl slowly, drop-wise, while shaking the tube gently. This was allowed to stand for 5 minutes. Repeat adding 10x V of 1.6% NaC1 slowly, dropwise, swirling the tube. After which the tube was centrifuged at 1,500 rpm at 20°C for 5 min.

The supernatant was aspirated and l0xV of malaria culture medium slowly added, drop-wise, while shaking the tube.  The tube was again centrifuged at 1,500 rpm at 20°C for 5 minutes and the remaining supernatant aspirated. After resuspending pelleted blood cells in sterile PBS, a smear was immediately done to check parasite count and parasite viability.

Animal inoculation.  Acclimatized 6-week old BALB/c were made ready, each mice weighed and tagged (as labels) on the day of inoculation.  100ul inoculum was injected intra-peritoneal immediately into a recipient mouse (106 infected erythrocytes per dose).The mice were returned to the cages and observed for 2-3 days. A tail-snip blood smear was done by Day 3 post-infection on each of the mice to ascertain if they have reached at least 0.5-1% parasitemia.

Observation for parasitological treatment response. In all three groups of mice, blood smear by tail snip were done to monitor treatment response to Chloroquine and Bio-Normalizer on Days 0, 2, 4, and 7.  Blood smear were also done on the Control Group on the same Days.  Mice not responding to treatment (positive parasitemia) and manifesting with severe malaria after Day 8 were culled by intra-cardiac puncture under inhalation anesthesia and parasitized blood drawn out. All mice underwent intra-cardiac puncture under inhalation anesthesia post-experimentation.

The parasitological endpoint parameter is number of days to clear parasites (by blood smear) during or after treatment.

By the third day post-inoculation, mice manifested with clinical symptoms of malaria showing awkward appearance, ragged fur coat, rigors and red eyes.  However, normal weight of all mice was maintained within the 7-day observation period (Table 1).

The infected mice manifested clinically by the 3rd day post-inoculation. Parasite count from tail-snip blood smears of the 15 mice (5 for each group) ranged from 1.2 to 17% parasitemia (Table 1). This was the Day 0 baseline parasitemia before treatment was started on Group 2 (CQ) and Group3 (BN) mice. 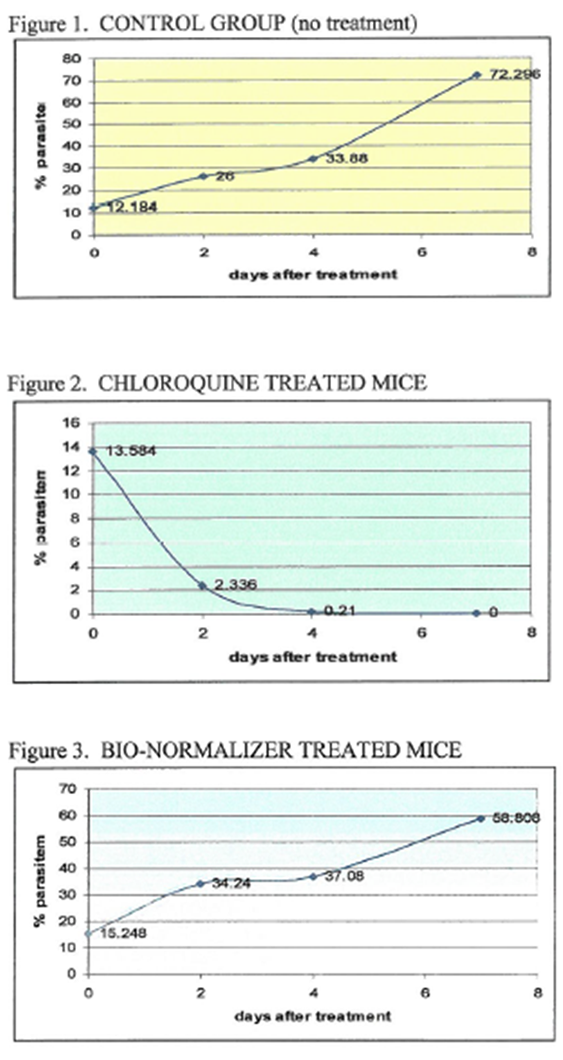 There is a clear trend of the anti-malarial effect of Chloroquine in the control CQ­ treated group.  The anti-malarial effect of Bio-Normalizer was not observed in 4 mice. Mouse no.3 in Group 3 (BN) presented paradoxical results, with parasitemia going down on Days 2 and 4, with Day 7 count not as elevated as the other mice in the same group. This could be an immuno-modulating effect, initially suppressing parasite increase. This could also be attributed to manipulations, i.e. uneven homogenizing of BN granules in the stock solution or the syringe, though this was regularly shaken as needed.

Although no major conclusion could be drawn as to the anti-malarial effect of BN in rodent malaria with these very preliminary results, it is recommended that further dose­ finding studies be done i.e. increasing dose, boosting immune status with BN before infection, and longer treatment duration.  Furthermore, BN could also be tried for treatment of dogs and other domestic animals manifesting with gastro-intestinal problems, i.e. vomiting, lack of appetite, convalescent stage. 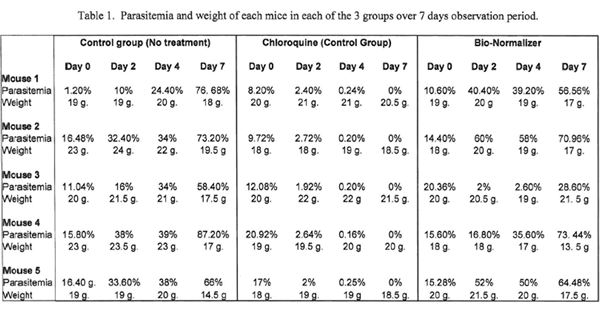