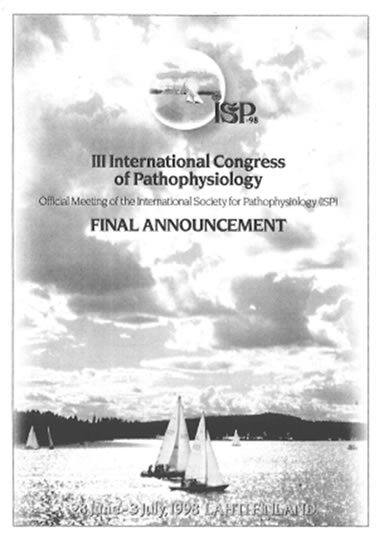 According to the results of chemical analysis Bio-Normalizer (BN) contains several powerful neuroactive agents capable to penetrating the blood-brain barrier and normalizing the cerebral metabolism. Among them are glutamic and asparagic aminoacid, oligopeptides etc. It was shown in experimental studies that BN suppressed significantly intensity of lipid peroxidation in the brain tissue and prevented epileptic seizures induced by intracerebellar injections of iron salts. Experimental and clinical examinations showed that BN was effective immunomodulator, regulator of redox status, adaptogen and modulator of trace element distribution. On the other hand, it is known that patients with brain damage, after neurosurgical operation are suffered from secondary immunodeficiency. Usually they lose the adequate response to the external stimuli (adaptive reaction) as consequence of oxidant/antioxidant imbalance. Therefore, it was suggested that BN could improve cerebral metabolism and psychoneurological functions in patients after massive brain operations due to brain injury, stroke or tumor. The purpose of the present study was to evaluate the efficacy of BN treatment of patients with brain damage after neurosurgical operation by using of EEG and clinical examination.

The open randomized case-controlled clinical and EEG examination of the BN effect was performed in patients with post operative brain damage. Fourteen persons of both sexes (8 male and 6 female, all right-handers) aged 10-65 years (mean age 38+ 19.2) participated in the study after their informed consent. The eight patients (57%) were operated because of traumatic brain disease, 3 patients (21,5%) had brain tumors and 3 patients (21,5%)-hemorrhagic stroke. The patients were given 6g of BN per day during 1 month.

EEG, neuropsychological and neurological examination and computer tomography (MRT and SPET) were performed before and after BN treatment.

Neuropsychological study included the dynamics of higher psychic functions estimated with Luria’s tests. They quantificate of memory, posture, praxis, somatosensory and tactile gnosis, reciprocal coordination of bands and emotional status and other functions.

EEG coherence analysis being a frequency-specific and phase-independent measure of the similarity between to EEG signals is regarded as an indicator of functional integration coupling. This approach can provide an appropriate for the detection of the degree of «synchronization-desynchronization» of two brain areas. At the present study were used several coherent parameters: 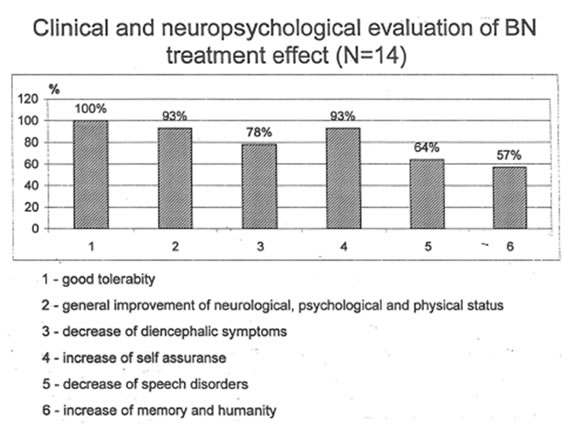 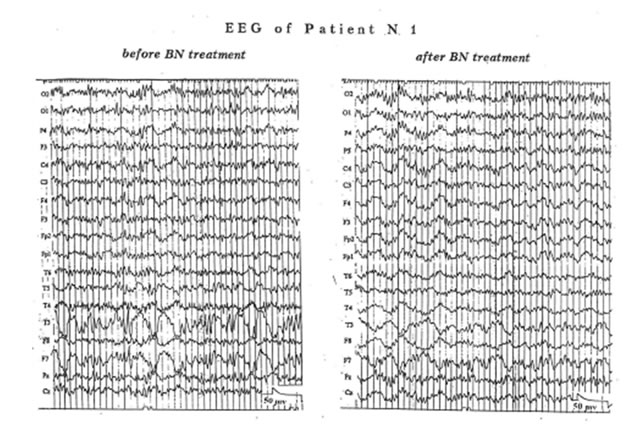 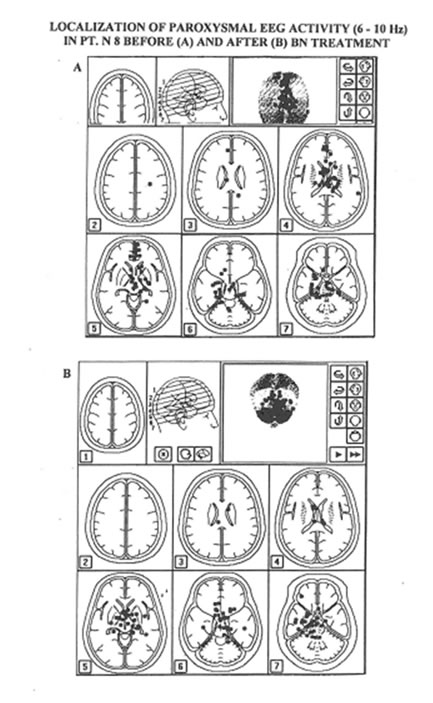 There were no side effect of the BN therapy. According to clinical records, all patients tolerated BN rather well (in 14 patients, 100%). In general, a significant improvement in neurological, psychological and physical status after BN treatment was shown for 12 patients (93%). Diencephalic symptoms decreased in 11 patients (78%). The results of neuropsychological tests demonstrated BN improvement of speech functions, particularly, in patients with aphasia (9 patients, 64%), increased self-assurance (12 patients, 93%), memory and humanity (8 patients, 57%). Several other positive changes in patient’s psycho-emotional sphere were found (Fig. 2).

EEG examination showed that before the BN therapy 10 patients (71%) demonstrated paroxysmal and epileptiform activity. The BN treatment resulted in decrease of amplitude of local epileptiform waves (Fig. 3) and bilateral paroxysmal sharps (Fig. 4) in these patients. Results of source localization analysis allow to propose the location of the brain damage but didn’t allow to evaluate the degree of dysfunction (Fig. 5).

An analysis of EEG power, source localization and coherence approaches showed that the most informative measure of BN effect was coherence analysis. We would like to demonstrate some individual cases of using this approach.

Patients N 8. female. aged 22, was examined one year after brain injury. CT –scan identified the contusion of the brain and diffuse brain edema. The neurological teats demonstrated brain damage with the pathological focus in the middle and stem brain areas. It should be stressed that in this time there has been no any improvement after of conventional therapy.

After the BN treatment clinical examination showed the improvement of patient’s physical and mental abilities significantly. She was able to make simple house keeping work. She began to walk without help, her mood, sleeping and vocal functions sharply improved. Neuropsychological tests also showed the positive dynamics of reciprocal hand coordination, improvement of graphic movements, a decrease in the hand tremor. 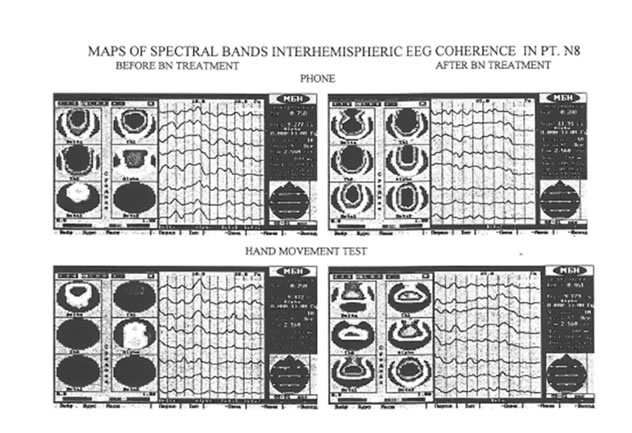 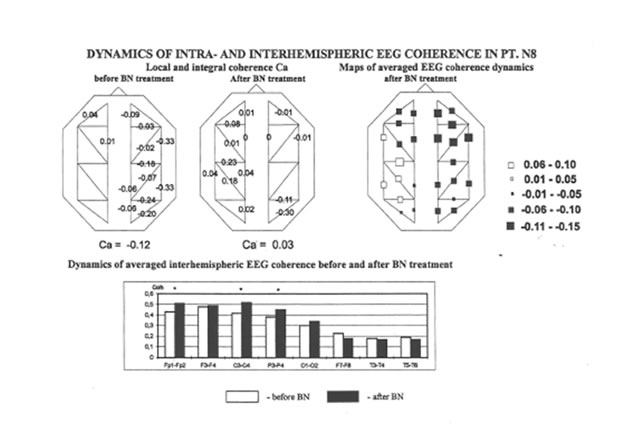 hypersynchronyzation in the right hemisphere and increase of averaged EEG coherence in the left hemisphere (Fig 6). That’s why integral· asymmetry coefficients had tendency to normalization, from -0.12 to 0.03. So, these EEG coherence results correlate to positive dynamics of psychopathological status of patient after the BN treatment. Neuropsychological examination showed the positive dynamics of reciprocal coordination. Improvement of graphic movements. A decrease in the hand tremor. The girl’s movement and behavior became much more self-confident.

Before the BN treatment (5 years after neurosurgical operation) patient had left-side hemiparesis with low level of muscule tonus. The long-term insomnia and headaches were accompanied by vomiting. She regards the constant emotional stress and suicidal attempts.

After BN administration headache fits diminished significantly. Sleeping improved and both physical and mental activities increased. The patient got able to do the home work and she was able to walk without a help. Vomiting attacks disappeared. However, patient’s aggressiveness didn’t change because her self-estimation of physical defect was increased.

Averaged data for all patients treated by BN are presented in Fig. 10. Results of the present study showed that the most integrative coherent parameters such as integral Ca and averaged interhemispheric EEG coherence have positive dynamics and observed a tendency to normalization after BN treatment in patients with brain damage. 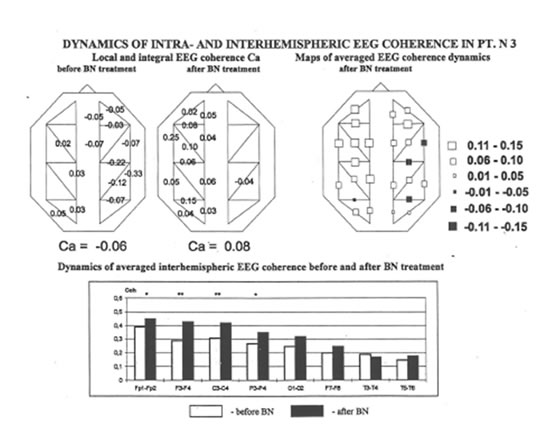 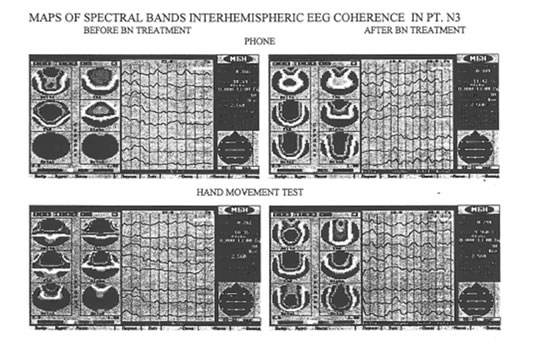 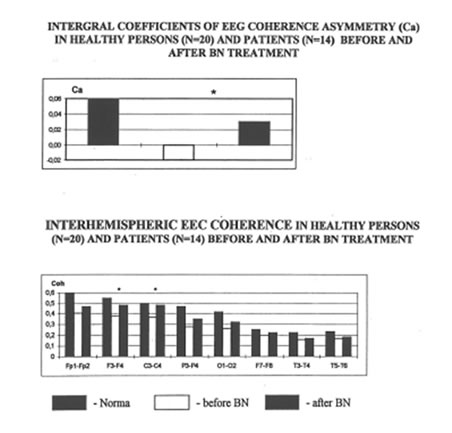 The most important result of BN-therapy for neurophysiologist is a decrease of paroxysmal and epileptiform EEG activity in patients with brain damage. This fact allowed us to suggest that BN treatment could be relevant for all cases of increased paroxysmal BEG activity and may be used for patients suffered from epileptic or epileptiform seizures or for those at high risk of epileptic seizures. Moreover, BN treatment resulted in a significant decrease of all kinds of diencephalic symptoms. These clinical data correlated to a decrease of diencephalic EEG-signs and tendency to normalization of iterhemispheric EEG coherence in the central and frontal areas which are the cortical projection of diencephalic structure. From the other hand. several investigations of EEG coherence performed in patients with different forms of the brain damage (Newton, 1993, Knyazeva, et al., 1995, 1997, Zhavoronkova, et al., 1995, 1997) showed that interhemispheric EEG coherence are reflective for the cortical-subcortical than cortical-cortical interaction. The present clinical data and EEG coherence results led to conclusion that the BN therapy improves the functional state of subcortical, namely diencephalic structures. These results led to proposition that either BN itself or products of its metabolism can get to deep structures of the brain such as diencephalen and/or restore metabolism in the area and the normal cortical-subcortical interactions