Summary.  To further elucidate the antioxidant protection of Bio-normalizer, a “health food” product of the fermentation of papaya, other tropical herbs, and cereals from traditional Japanese foods, and an inhibitor of hydroxyl radical and iron-dependent neuronal lipid peroxidation in post traumatic epileptic rats and ischemia-reperfusion injury in gerbils, we studied its effect on methylguanidine in aged rats and on GABA-mediated neurotransmission. Oxidative stress was shown to hasten aging and stimulate neurotransmitter release which result in epileptic seizures and ischemia-induced neuronal damage. Corresponding to the increased lifespan and improve physical conditions observed after 27 weeks of peroral administration of Bio-Normalizer in 117-week old aged rats, the cytosolic and mitochondrial SOD were further increased during aging, whereas TBARS decreased in several aged rat brain regions. The present study however revealed no correlation between oxidative stress and methylguanidine in the rat cortex, both as a function of age and Bio-normalizer supplementation in the diet of the same experimental aged rat models.

A separate study using hippocampal slice as an in vitro model of inhibitory neurotransmission was undertaken to ascertain whether oxidative stress and high K+ stimulation cooperate in the neuronal pool of releasable(3H)GABA. A continuous superfusion system employing a peroxyl radical generator AAPH in normal or high K+KRB buffer to produce the stress on the slice was used to study the effect of Bio-normalizer on the stimulated release of (3H)GABA in hippocampus. 0.5% Bio-normalizer added to the perfusing buffer modulated both the K+ evoke and peroxyl radical induced (3H)GABA release. By ESR spin trapping, the concentration of 50% inhibition of Bio-normalizer on the spin adducts of peroxyl radical was found to be 5mg/ml. The data suggest that high extracellular K+ and oxidative stress influence GABA transmission in a sequential as well as in a reinforcing manner, and that antioxidants such as Bio-normalizer may neutralize peroxyl radicals and act as a neuromodulator of the strong inhibitory action of GABA on neuronal firing in the central nervous system. The findings also support earlier propositions of Bio-normalizer being a useful preventive antioxidant against oxidative stress and epilepsy.

Oxidative stress or the cytotoxic consequences of reactive oxygen species such as singlet oxygen, hydroxyl radical, superoxide anion, and hydrogen peroxide lead to cell degeneration in the brain resulting in various disorders like epilepsy, ischemia, and aging (Halliwell and Gutteridge, 1989). Antioxidants on the other hand can retard or abort oxidation reactions. Specifically studies with aged rodents have revealed altered cellular antioxidants and antioxidant enzymes, and a dramatic increase in lipid peroxidation products (Mizuno and Ohta, 1986) and pigments (Monji et al., 1994). To our knowledge, no report has been made on methylguanidine as a function of age. Attempts to extend man’s maximum life span spurred a number of studies aimed at searching for electron spin resonance (ESR) spin trapping the scavenging ability of Bio-Normalizer on the spin adduct of the peroxyl radical generated in aqeous solution and in brain homogenate.

Bio-Normalizer is a product of Sun-O International Inc., Gifu, Japan.

Male Sprague-Dawley rats from Clea Japan Inc., (Tokyo, Japan) aged 12 and 89 weeks were housed in individual aluminium cages at 20-26 °C and humidity of 40-70% and were maintained under strict sanitary conditions. The animals were allowed free access to water and a standard diet. The control group consisting of 20 aged rats were given boiled tap water while the treated group consisting of 15 aged rats were orally administered with 0.1g/kg body weight of Bio-Normalizer for 27 weeks at a volume dosage of 1.0ml/100g animal weight. (This dose approximates the recommended dose for human which is 3-9g/day.) The cortex was dissected, frozen in liquid nitrogen and kept at -80°C until analysis. Other details are given in a previous study (Santiago et al., 1993c) 22-24 min. Then the perfusion was resumed using the normal buffer until the collection period for the third evoked release (stimulation 3) from fractions 68-72 at 34-36 min. This was then replaced with the normal KRB for the remainder of the collecti.on period. Two ml of counting scintillant was added to each fraction before subjecting the radioactive mixture to Liquid Scintillation Counter 703 (Aloka, Tokyo). The spontaneous release (SR1) of GABA was estimated as the area under the baseline of peak 1 (SR2), while the K+-evoked release (KR1) was estimated as the area under the baseline of peak 2 (KR2). The ratio of the spontaneous GABA release was calculated as rSR = SR2/SR1 whereas the ratio of the K+-stimulated release was estimated as rKR = KR2/KR1. In parallel experiments perfusion was repeated using 10 mM AAPH in place of 50 mM K+ or co-perfused with 10 mM AAPH. The same computations were done.

Free radical reactions have been widely implicated in epilepsy, ischemia, and aging as initiators and promoters of a chain of peroxidative events (Halliwell and Gutteridge, 1989). About 1% of the oxygen consumed by the mitochondria is transformed to superoxide anion (Richter, 1988). Several brain enzymes such as monoamine oxidase, tyrosine hydroxylase, and L-amino oxidase produce H20 2 (Coyle and Puttfarcken, 1993) which can react with iron to form a more reactive and toxic hydroxyl radical by Fenton reaction. -OH abstracts hydrogen at the carbon-double bond of the polyunsaturated fatty acids largely concentrated in the brain. This in turn undergoes molecular rearrangement to form more stable conjugated dienes, which can cross-link fatty acids within cellular membranes. Lipid peroxidation continues as conjugated dienes combine with oxygen to form peroxyl radical (ROO-). These radicals abstract hydrogen atom from adjacent brain regions. By enhancing SOD (Santiago et aI., 1993c) – the enzyme involved in metabolic degradation of superoxide anion which is shown to increase with age (Sawada and Carlson, 1987) – and inhibiting TBARS levels (Santiago et al ., 1993c), BiD-normalizer could retard the aging process.

Guanidino compounds have been shown to induce epilepsy. One of these is methylguanidine, a potent endogenous convulsant known to generate hydroxyl radicals in vitro (Hiramatsu et aI., 1989; Matsumoto et al., 1976). No study has linked methylguanidine with aging. In this paper we found no clear correlation. Methy1guanidine levels, as shown in Figure 1, are roughly linearly proportional to creatinine levels in the cortex of the three groups of rats. This implies that the ratio methylguanidine/creatinine is a constant in adult or aged rats (regardless of Bio-normalizer treatment). This could be expected if MG is produced only from creatinine. Therefore, the data show no difference in oxidative stress state both as function of age and Bio-normalizer treatment. On the other hand, even if it was synthesized from creatinine through creato1 in vitro by hydroxyl radicals (Nakamura et al., 1991), there is also a possibility that methylguanidine might be sourced from the diet or as a product of an in vivo pathway not involving free radicals. 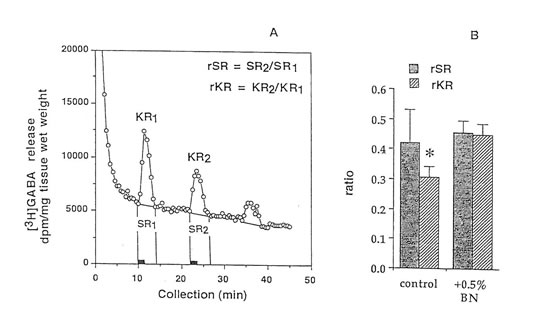 Figure 2. Release of (3H)GABA in the mouse hippocampal slices after high K+ stimulation. (A) 2 min fractional release values (black bar) at 3 peaks, stimulation 1 (spontaneous), stimulation 2 (K+-evoked), and stimulation 3 (recovery); and (B) ratio of the spontaneous release (rSR) and K+-evoked release (rKR) in untreated and Bio-normalizer treated slices. Values are means ± S.D. of 5-8 animals. *p < 0.05 versus (rSR) and (rKR) (treated group).

Protective action of Bio-normalizer against oxidative stress and brain disorders 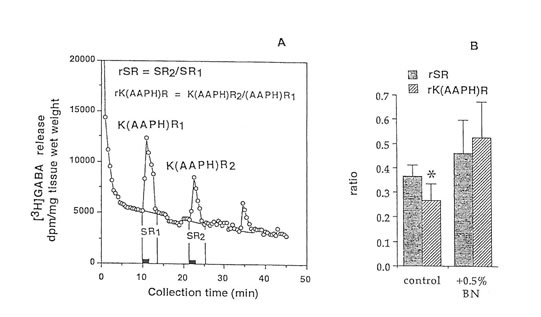 Figure 4. Release of (3H)GABA in the mouse hippocampal slices after AAPH stimulation in high K+ KRB buffer. (A) 2 min fractional release values (black bar) at 3 peaks, stimulation I (spontaneous), stimulation 2 (K+-evoked and AAPH-induced), and stimulation 3 (recovery); and (B) ratio of the spontaneous release (rSR) and K+-evoked, AAPH-induced release (rK(AAPH)R) in untreated and Bio-normalizer-treated slices. Values are means ±S.D. of 5 -8 animals. *p < 0.025 versus rSR and (rK(AAPH)) of the treated group.

Radical initiators include peroxides, hyponitrites, and azo compounds. In this study we used azo initiators e.g., AAPH, because it could generate constantly measurable, controllable, and easily and safely handled peroxyl radicals. To show that the observed changes in GABA release were the consequences of free radical formation, and to test if immediate protection can be conferred upon the brain tissue by exposure to antioxidants like Bio-normalizer, the hippocampal slices were continuously perfused with a constant flux of peroxyl radicals in normal or high K+containing KRB buffer. Figures 3A, and 4A indicated that GABA can be released by AAPH initiator of peroxyl radical from brain slices. Figures 3B and 4B illustrate that the GABA release was significantly and apparently reduced during the second exposure of the slices to AAPH contained in high K+ and low K+ KRB buffer, respectively. This reduction was markedly modulated upon exposure of the slice with 0.5% Bio-normalizer. It is likely that Bio-normalizer may have prevented first chain-initiation by scavenging the initiating hydroxyl radicals in the brain, or that Bio-normalizer may have chelated iron in the brain and therefore aborted the shows a striking similarity to the adduct of DMPO with the hydroxyl radical (DMPO-OH). Nitrogen (aN) and β proton (aβH) were virtually identical to those of DMPO-OH generated by the Fenton reagent (Fig. 5C) and previously published spectra for this species (Buettner, 1987). Bio–normalizer was unequivocably demonstrated to scavenge dose-dependently the DMPOOOR, providing direct evidence on its scavenging potential on ROO·. The concentration of Bio-normalizer required to scavenge 50% (IC50) of the generated DMPO-OOR spin adducts was estimated at 5 mg/ml.

The antioxidant defenses of Bio–normalizer against hydroxyl and/or peroxyl radicals may include papaya (Webman et aI., 1989; Santiago et ·al., 1992a; Osato et aI., 1993) and yeast (Santiago and Mori, 1993). Papaya is a good source of known antioxidants such as vitamin C, organic acids (mallic and citric), and glucose, and has SOD-like activity while yeast contains SOD, catalase, glutathione peroxidase, and lipopolysaccharide. The hydroxyl radical scavenging components of Bio-normalizer are stable to heat and acidic pH (Santiago .et aI., 1992b). Bio-normalizer contains 5 of J 1 amino acids with reported antioxidant activity. SOD, catalase and

Bio-normalizer’s ability to scavenge the initiating hydroxyl radical species in lipid peroxidation reactions, chelate iron, or scavenge intermediate radicals such as carbon-centered radicals and peroxyl radicals in in vivo and in vitro systems shows that it may be a useful clinical antioxidant not only in the prevention and/or treatment of epilepsy and ischemia but in aging (Santiago et aI., 1993c; Cutler, 1985) and cancer (Marnett, 1987) as well. As reported (Marnett, 1987), peroxyl radicals could initiate and promote carcinogenesis. The data also suggest that naturally occurring antioxidants, amino acid receptors antagonists or agonists, or receptor modulators may be employed in impaired GABA neurotransmission. Bio-normalizer modulates the release of GABA from inhibitory neurons suppressed by high K+ and oxidative stress.