The potassium-stimulated L-(3H] aspartate release from hippocampal  slices of ddY mouse   was significantly inhibited  by pretreating the tissue with 0.05% (w/v) of Bio­ normalizer, a natural fermented  health food product with hydroxyl radical scavenging action. The modulation of aspartate release in the hippocampus indicates a possible involvement of antioxidant against synaptic excitation and excessive neuronal depolarization attributable to aspartate and mediated by an increased extracellular potassium ion.

L-Aspartate (L-Asp), a naturally occurring amino  acid transmitter present  in  substantial concentrations in the central  nervous system,  causes  powerful  excitation of neurons.1 It was shown   that  as  a  neurotoxin, L-Asp    evoked   a  cortical spreading depression accompanied  by changes in extracellular conductivity2 and produced  membrane depolarization3 resulting to  convulsive disorder,4  epileptiform  discharge,5  and  ischemia­ reperfusion injury.6 The  excitatory release  of   L-Asp  from  rat hippocampal slices  was attributed  to free radical formation7 which participates  in the genesis of ischemia-induced neuronal  damage6,8 and development of epileptiform  activity.9  Reactive  oxygen species such as superoxide, peroxyl and hydroxyl  radicals and hydrogen peroxide have been shown to be generated  during  brain  injury.IO,ll  Furthermore, the elevations of extracellular potassium  which reflect the level of excitation,  and the decrease  in  extracellular calcium, which reflects calcium entry into the cells can produce vital changes on the aspartate release at the  presynaptic site  of  the  neurone.l2   Pretreating the animals   with  vitamin  E and selenium,13 glutathione reductase, superoxide dismutase and  catalase,l4 have  been demonstrated to prevent  brain damage during epileptic seizures and ischemic injury.

Bio-normalizer  is a product  of the fermentation of papaya,  other  tropical  herbal plants,  and cereals  from  traditional  Japanese  foods, and has been reported  to give  many health benefits in preventing chronic diseases and in generating  a feeling of well-being.  In particular,  Bio-normalizer has been found  effective as a prophylactic agent  in convulsive disorder, epilepsy  in children  and in various  forms  of myocardial, gastric  and cerebral ischemic attacks. A proven scavenger of hydroxyl radical, Bio-normalizer was demonstrated to inhibit the thiobarbitric acid-reactive substances (TEARS)   in the cortex, 15 and the dopamine and serotonin in the intrastriatal perfusate, 16 of rats intracortically injected with Fe3+ solution.  Bio-normalizer also produced a significant reduction in ischemia-reperfusion injury-mediated increase in carbon-centered radicals and TEARS in the cortex, the hippocampus and the striatum of the gerbils.17

Our working hypothesis was that free radical formation, hyperactive release of monoamines and the generation of excitatory amino acid neurotransmitters may cooperate in the genesis of post-traumatic epilepsy, seizures and brain ischemia and may lead to neuronal death.  These three interrelated events may be inhibited through antioxidant treatment such as Bio-normalizer. We developed an in vitro system to study the release of aspartate from the hippocampus, a brain region particularly sensitive to ischemic insults18 and seizures.l9

The  hippocampal slices were preincubated for 5 min at 370C in previously  gassed standard buffer solution in order to allow functional recovery,  and thereafter loaded with L­ [3H]  aspartate (final  cone: 500 μ M) for 30 min at 37oC.  In stimulated buffer,   NaCl was replaced by equimolar amount of 50 mM KCl (to make a total concentration of NaCl + KCl equivalent to 127.5 mM) as the hyperosmotic solution.   The hippocampal slices were transferred to a stainless cell chamber (stainless syringe holder KS-13, Advantec, Tokyo, Japan) by filtration, immersed in a water bath at 37OC and perfused initially with the normal buffer medium.  The release of radioactivity accumulated by the cells was monitored every 30 s at a flow rate of 1.5 ml/min   for 45 min in 90 tubes.   The  selection  of the perfusing medium  namely: standard buffer (1);  stimulated  buffer containing 50 mM K+(2); stimulated buffer  containing Bio-normalizer (3)  was done  by operating the five-way  cock.  The  K+– induced aspartate release was done in three sequential phases(a) spontaneous release into    normal medium (at 10-12  min, basal  phase);  (b) release induced by modified medium (at 22-24  min, stimulation  phase); and (c) spontaneous release into standard  medium (at 34-36 min,  recovery  phase).   Two ml of counting scintillant was added to each fraction before subjecting the radioactive mixture   to Liquid Scintillation Counter 703 (Aloka, Tokyo, Japan).   The spontaneous release  (SRI)  of aspartate  was estimated as the area under the baseline  of peak  I (KR1), while  the  potassium-stimulated asparate   release  (SR2)  was estimated  as the area  under the baseline  of peak 2 (KR2). The ratio of the spontaneous aspartate release was calculated as rSR = SR2/SR1   whereas the ratio of the K+-stimulated release was estimated as rKR = KR2/KR1.  Peak 3 indicates the recovery phase which was used to evaluate the viability of the hippocampal slices after the stimulation.To test for the antioxidant activity of Bio-normalizer on the excitatory release of aspartate, different concentrations (0.05, 0.1 and 1.0% w/v) of Bio-normalizer were mixed separately in the stimulated buffer   medium.    The statistical significance of difference between the experimental groups was evaluated by U-test.

To elucidate the mechanism of excitatory amino acid neurotransmitters in brain injury, we developed an in vitro model of simulated   K+-stimulated aspartate release from   the mouse hippocampal slices.  Figure 1 shows the schematic diagram of the release experiment. Using a five-way cock, the selection of the gassed buffer medium (normal or stimulated buffer with and without Bio-normalizer) could be allowed to perfuse one after the other into the slices. Air inlet was important in the set-up to allow for at least one cm distance between the buffers during buffer change.  Extra care was taken in order not to incorporate much air when turning or moving the cock because bubbles tended to disrupt the medium flow rate causing fluctuations on the radioisotope readings in the perfusate. The slices were allowed to pass through a stainless filter, pressed by another stainless filter, separated by a polyethylene ring and rested in the cell chamber.    The slices trapped in the cell chamber were continuously   perfused with gassed buffer medium under a water bath (37o C) at a flow rate of 1.5 ml/min. Fractions were collected every 30 sin 90 tubes for 45 min.

The present paper represents the first report of a decrease in potassium-evoked [3H] aspartate release from hippocampal slices using a non-drug preparation Bio-normalizer. This experiment was designed  because Bio-normalizer (a health food)  was shown  previously   to: (1)   scavenge hydroxyl  radicals,15  (2) inhibit   membrane lipid   peroxidation  in epileptic rats,l5 (3)  modulate the excitatory release of monoamines (dopamine and serotonin)  and their  metabolites in the same  model  of epileptic rats,16 and   (4)  suppressed  the carbon­ centred radicals and TBARS in post ischernic gerbils.l7 These observations reflect a unifying concept  that Bio-normalizer acts as an antioxidant and thus  is capable of inhibiting the toxic reactive  oxygen  species  (such as superoxide, peroxyl and  hydroxyl  radicals and hydrogen peroxide) and  the free  radical  reactions such  as lipid  peroxidation in the event  of  brain damage. Antioxidant therapy  by vitamin  E,    selenium,  glutathione reductase,  superoxide dismutase and  catalase,l3,14,20 among  others  have  been also found  useful in such  brain disorders.

The formation  of free  radicals  during   ischemia-induced neuronal  damage6,8 and seizures9  is believed  to trigger   the release  of substantially greater  amount  of excitatory amino acid  neurotransmitter  aspartate.   Kitagawa K. eta al. have shown  that free  radical formation follows brief ischemic episode and leads to onset of delayed neuronal death.21 By intracerebral microdialysis,  Benaviste H. et al. have  indicated elevated hippocampal extracellular aspartate during transient cerebral ischernia.22  The synaptic release of aspartate, which  could  have facilitated the seizures19,20 and ischemia- reperfusion injury ,8,23    is greatly  influenced  by  the  increment  in  the  concentration  of   extracellular K+.24 Concomitantly, the  increased  levels   of  brain    extracellular K+  may  cause  firing  off monoamines like dopamine and serotonin, 25changes in membrane potentials and active transport  of ions  such  as Ca++  shifts12 which  effect    significant changes in  neuronal excitability and synaptic  transmission.  For instance,  influx of  intracellular “free”  Ca++ might lead to availability of transition  metal ions, and hence increased rates of lipid peroxidation.23  While the mechanism of action of Bio-normalizer  on Ca++ transport  in the neurones  has  yet  to  be established, our  present  data  fully  support    of  the  antioxidant protection  of Bio-normalizer  in inhibiting  the K+-evoked  presynaptic  release  of putative excitatory  amino acid aspartate in  the hippocampus,  a brain region particularly  sensitive to ischemic insultsl8 and seizures.l9  We believe that  Bio-normalizer interferes with   the peroxidation  of neuronal membrane and long term changes in excitatory  neurotransmission (monoamines,  excitatory amino acids and metal ions release); and this may be worth prophylactic intervention in epileptic seizures and ischemia-reperfusion injury.

In the present  study,  we have successfully used an in vitro model  to simulate the excitatory release  of L-aspartate from the hippocampus as mediated  by an increased concentration  of  extracellular  potassium, that  is  known   to  occur  in  vivo following intracortical injection  of iron solutions  and in brain damage  during ischemia-reperfusion injury.   The excessive stimulation of neurotransmitters and production of toxic reactive oxygen species in the brain may be significantly inhibited by pretreating the brain tissue with Bio-normalizer, a natural fermented health food product with potent hydroxyl radical scavenging activity.

FIG.l.   Schematic diagram of the in vitro continuous measurement of L-[3H] aspartate release from the hippocampal slices. The delivery of the gassed medium buffer at a flow rate of 1.5 ml/min to the cell chamber (voulme: 0.15 cc) and the detection of released aspartate are described under Materials and Methods.

FIG.3. Effect of different concentrations of Bio-normalizer on the high K+-induced release  of L-[3H] aspartate from hippocampal  slices (30  μM) preloaded with 500 μM   L-[3H] aspartate.  The number of experimental animal per group was 11 or 12.  Significance of difference from control:   * p < 0.001.The ratio of spontaneous release of aspartate (rSR) = SR2/SR1 while the ratio of the K+-stimulated release (rKR) = KR2/KR1. 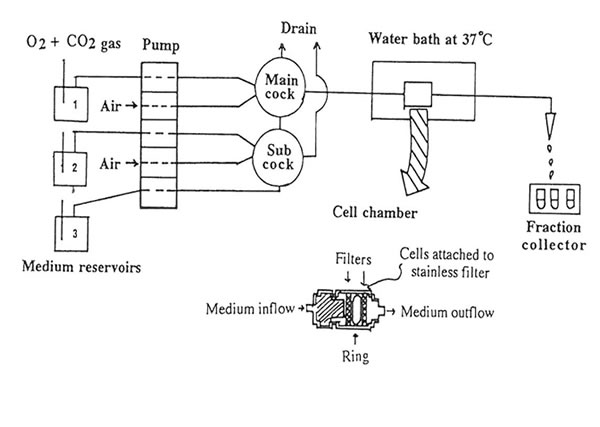 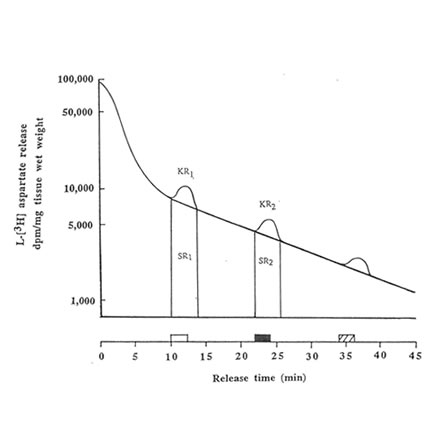 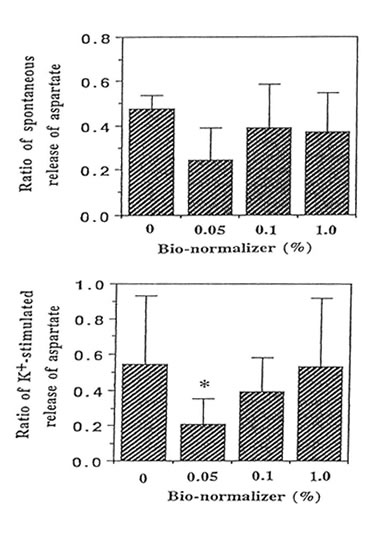