Introduction: Subpial injection of aqueous ferrous chloride solutions [1] or iron-containing heme compounds [2] in rats produces burst of epileptiform activity [3], focal brain oedema [4],cavity necrosis [5] and neuronal damage [6]. Evidence for lipid peroxidation [7] at the iron-injection site is confirmed by the increase in malondialdehyde [8], flourescent products [9] and superoxide radicals [10,11]. Pre-treatment of rats with tocopherol and selenium prior to the iron injection prevents the development of seizures [4,5,12].

In a previous study we demonstrate the significant inhibitory effect of Bio-catalyzer (BC), a commercial health food supplemet in Japan and in the Philippines, on the thiobarbituric acid-reactive substances (TBARS) in the cortex of rats [13]. As a hydroxyl radical scavenger [13,14] and/or metal chelator, BC is claimed to have prevented iron-initiated free radical reactions believed to cause membrane damage and disruption of the integrity of the brain microvasculature. BC also inhibited TBARS and further increased superoxide dismutase activity in different brain regions in aged rats [15].

Formation of free radicals, particularly hydroxyl and superoxide radicals, causes progressive brain degeneration [16] and initiates peroxidative damage to membranes [17,18] as in seizure activity, which often develops after head trauma, cortical infarction and intracerebral haematoma. A number of workers have proposed that iron-induced lipid peroxidation relates to the turnover rate of monoamines and to seizures [19-21].

In a previous study to examine the effect of oral administration of BC on iron-induced lipid peroxidation in the rats [13] we performed only one-point observation. We have now monitored the simultaneous effects of intracortical (i.c.) FeCl3 injection and intraperitoneal (i.p.) administration of BC in alive adult rats on striatal dopamine (DA) metabolites such as 3,4-dihydroxyphenylacetic acid (DOPAC) and homovanilic acid (HVA), and the main serotonin (5-HT) metabolite of the striatum, 5-hydroxyindoleacetic acid (5-HIAA). The aim was to elucidate further the antioxidant protection of BC on the brain against oxidative stress.

We immobilised the epileptic rats with succinyl chloride and proceeded with the in vivo intracerebral microdialysis technique developed by Phebus et al. [22]. A dialysis probe, implanted into the left striatum, was continuously perfused with normal physiological saline (NPS). We collected the dialysate at regular intervals for 240 min and analysed it by high performance liquid chromatography coupled with an electrochemical detector (HPLC-ECD) [19].

Male adult Sprague-Dawley rats from Charles River (Kanagawa, Japan) weighing 250-350 g, were housed for 1 week at 25ºC and humidity of 50 ± 5% and were allowed free access to water and a standard diet MF (Oriental Yeast, Tokyo, Japan). Inhalation anaesthesia with ethyl ether was carried out before the preparation for stereotaxic surgery. Following the system for intracerebral dialysis [22], the rats were intubated via tracheotomy, and respiration was maintained through a respirator.

Each rat was immobilized by i.p. injection of succinylcholine chloride (Katayama Chemicals, Osaka, Japan) and mounted in a Koft stereotaxic frame. The dialysis probe was carefuly implanted into the left striatum at the following coordinates as described in the stereotaxic atlas of Pellegrino et al. [23]: 2 mm anterior to the coronal suture, 3 mm to the left of the sagittal suture, and 4 mm below the dura.

The probe consisted of two parallel 23 gauge stainless steel cannulae (35 mm length and 0.65 mm diameter) which was constructed from two injection needles (Japan Medical Supply Co. Ltd, Tokyo, Japan) trimmed and soldered together. Cellulose dialysis tubing was inserted into each end of the hand-made probe and glued in place to provide an exposed loop of approximately 3 mm in length. For intracortical injection of FeCl3 (Wako Pure Chemical Ind. Ltd., Osaka, Japan) or acidified NPS (with pH adjusted to that of iron solution), a burr hole was made over the right sensorimotor cortex, 1 mm posterior and 1 mm lateral to the bregma.

The probe was continuously perfused with NPS at 2 µL min-1 using a hand-made microinfusion pump [19] and the dialysate was collected every 20 min for 2 h in microcentrifuge tubes. To preclude the effects of deep anaesthesia, six or seven dialysate samples were collected prior to the administration of BC. The intrastrial perfusate assays for DA, DOPAC, HVA, 5-HT and 5-HIAA were carried out by HPLC-ECD. DA and HVA were from Sigma Chemical Co. (St. Louis, MO, USA); DOPAC and 5-HIAA were from the Aldwich Chemical Co., Inc. (Milwaukee, USA) and 5-HT was from Wako Pure Chemical Ind. Ltd., Osaka, Japan. 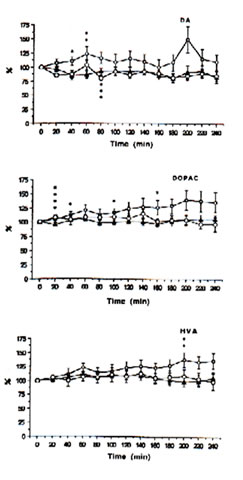 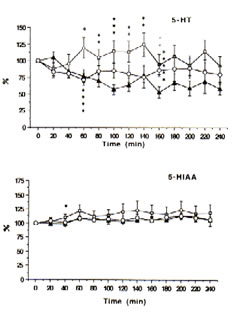 The concentration of the constituents in the sample was calculated by comparing the peak heights and retention time of the samples with standards. The data were expressed as percentage changes from the values of dialysate samples just prior to BC treatment. The statistical significance between the control and experimental groups was determined using the U-test.

The seizures were induced by the method of Willmore and Rubin [4]. Briefly, FeCl3 solution (100 mM,5 L) was injected i.c. at 1 L min-1 through a 25-gauge needle attached to a microsyringe and inserted into the right cortex 2 mm below the dura 30 min after administration i.p. of BC solution (0.1 g kg-1 b.w.). This concentration approximates the recommended dose for humans.

Results and Discussion: In the FeCl3-induced seizures of experimental post-traumatic epilepsy in animals, the generated reactive oxygen species, in particular hydroxyl and superoxide radicals, initiate and propagate peroxidation reactions {8,10,24} at the carbon-double bond of the polyunsaturated fatty acids and lipids largely concentrated in the brain. A hydroxyl radical scavenger or a metal chelator, BC was earlier shown to inhibit TBARS, a measure of lipid peroxidation, in iron-injected epileptic rats [13]. To reassess the participation of BC in seizure mechanisms, an in vivo microbrain dialysis technique was used.

With time, the intracortical injection of iron in the rats caused progressive increases in DA, DOPAC and HVA (Figure 1) and 5-HIAA (Figure 2) and an up-and-down trend for 5-HT in contrast to the control group. In addition, significant excitatory releases of DA and DOPAC occurred between 40-60 min with their highest peak levels at 140% after 200 min. The same was observed for 5-HT and 5-HIAA although the highest peak was only about 125% after 140 min.

HVA increased markedly and showed a highest significant peak of about 130% after 200 min. Spike discharges induced by iron appear in the EEG for 14-45 min, and polyspikes and ictal patterns occur between 70-90 min after the injection of iron solutions [25]. This suggests that the activation of the intrastriatal dopaminergic and serotonergic neurons, except HVA, may have originated from the seizures activity induced by iron.

This supports previous findings that dopaminergic transmission in the striatum and the complex neuronal networks modulates the seizures threshold [26]. DA and 5-HT are metabolized in synaptic or glial cells and are released into the cerebrospinal fluid before permeating the dialysate. Their rate of transport and synthesis may have been influenced by the decompartmentalization or deposition of iron.

The intraperitoneal administration of 0.1 g kg-1 BW of BC, however, significantly inhibited the elevated levels of DA (p<0.08) and 5-HT (p<0.03) after 60-80 min and apparently decreased the excitatory release of DOPAC, HVA and 5-HIAA (Figures 1 and 2) in the striatal perfusate of rats intracortically injected with iron solution. That BC inhibited DA and 5-HT between 60-80 min, within the period that spike discharges, polyspikes and ictal patterns have been demonstrated to appear in rats [25], suggests that the hyperactivity of dopaminergic and serotonergic neurons at the synaptic level may be initiated by free radicals and suppressed by BC. These findings support our previous data [13] that the pre-treatment of rats with BC inhibited iron-induced lipid peroxidation through its scavenging action against hydroxyl, superoxide and lipid peroxides, thereby preventing seizures and epileptic discharges [3], brain edema [4], necrosis [5] and neuronal damage as do -tocopherol and selenium [12].

The observed hyperactivity of monoamines may be the consequence of stimulation of afferent fibers, causing significant elevations in extracellular K+[26-30]. The activation of DA and 5-HT and their metabolites as enhanced by the release of K+ implies a complex interaction between the monoamine receptors and excitatory amino acids. The synaptic release of excitatory amino acids such as L-aspartate [31] and subsequent activation of specific GABA receptors [32] by neurotransmitters and neuromodulators have been implicated in seizures.

The degree of calcium release as a result of stimulation of afferent fibres after peroxidation induced by injection of iron solutions may alter the level [33] and histochemical distribution [34] of neurotransmitters and metabolites. These calcium antagonists are seen as important agents for neuronal function. The action of BC on the biogenic amine-containing neurons remains to be elucidated further.