BIO-CATALYZER α·ρ NO. 11, BIO-CATALYZER 2B, BIO NO. 66 QUENCHED FREE RADICALS AND INHIBITED LIPID PEROXIDATION IN IRON-INDUCED EPILEPTIC FOCUS IN RATS

The biochemical pathogenesis of post-traumatic epilepsy implicates the most potentially damaging hydroxyl radicals (·OH) which initiate lipid peroxidation in neuronal membrane, edema, cavity necrosis in tissues, and convulsive seizures in iron-induced epileptogenic foci in rats (1-3). The search for effective health foods and other non-drugs with minimal side effects for prevention and treatment of post-traumatic epilepsy has received much attention. Recently, we have demonstrated that a commercially available health food called Bio-catalyzer α·ρ No.11 (Bio-normalizer) and its by-product Bio-catalyzer 2-B are ·OH scavengers. The former was found to inhibit the formation of thiobarbituric acid reactive substances, a measure of lipid peroxidation in iron-induced epileptic foci in rats (4).

Through electron spin resonance spectrometry, we analyzed the scavenging action of a new health food called BIO No.66. The anti-epileptic potentials of Bio-catalyzer 2B and BIO No.66 were also tested using the same experimental animal model.

Radical Analysis Details of the analysis of DPPH, hydroxyl and superoxide radicals by ESR spectrometry (JES-FE1XG, JEOL, Tokyo) and ESR parameters are given in a previous report (4). Hydrogen-and carbon-centered radicals were analyzed as follows: To 0.5 ml of rat cerebral cortex homogenate (0.05% w/v), 0.45 ml of Tris/HCl buffer, pH 7.4, and 0.5 ml of equimolar (2 mM) mixture of ferrous chloride and ascorbic acid was added the sample, mixed for 10 s and incubated at 37°C for 15 min. To the incubated medium was added 20 μl of DMPO, mixed for 10s, then placed in an ESR flat cell (JEOL, Tokyo) and analyzed exactly after 50 s.

Iron-induced epileptic foci of rats Ferric chloride-induced epileptic foci of rats was performed following the procedure of Willmore et al (5). Briefly, the left cerebral cortex of the control animals were subpially injected with the same volume of saline in place of ferric chloride which pH was adjusted to that of the iron solution. Rats were administered orally with 1 g/kg body weight of Bio-catalyzer 2B or BIO No.66 30 min prior to cortical injection of 5 μl of 100 mM ferric chloride for 5 min thru a needle inserted into the left cortex to a depth of 1-2 mm. Rats were sacrificed by cervical decapitation and the epileptogenic focal area was rapidly excised over an ice plate following the method of Glowinski and Iversen (6) and kept at -80°C until TBARS analysis. TSARS were assayed as described by Ohkawa (7).

The radical scavenging property of the 3 products may be attributed to papaya-the base plant material used in their preparation, and other constituents such as yeast and glucose. At 50-250 mg/ml, papaya (a Philippine medicinal plant) quenched DPPH, ·OH and superoxide radicals (unpublished data). Yeast Saccharomyces cerevisiae also quenched DPPH, hydroxyl, superoxide, hydrogen-and carbon-centered radicals (8). Glucose scavenged ·OH at 0.045 to 45.45 mg/ml. Other plant materials used may also contain natural antioxidants. 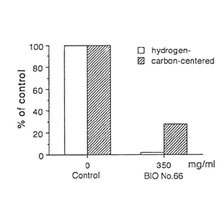 Fig.2. Scavenging effect of 350 mg/ml of BIO No.66 on hydrogen-and carbon-centered radicals. The values are means of 4-5 determinations. 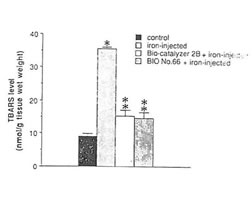 Figure 3 shows the inhibitory action of Bio-catalyzer 2B and BIO No.66 in vivo lipid peroxidation. The TBARS level was decreased in the left or ipsilateral sensorimotor cortex of rats orally administered with 1 g/kg body weight of the products whereas, the TBARS concentration remained high in the untreated iron-induced rat sensorimotor cortex. Saline-injected rat group contains appreciable TBARS. Similar preventive action on TBARS formation was reported on Bio-catalyzer (4).

The treatment by alpha tocopherol and selenium prevented epileptiform discharges in iron-induced rats (9-10). Superoxide, peroxyl radicals, organic radicals and ·OH have heen reported to be liberated in the neuronal membrane, where they initiate peroxidative damage and cause experimental post-traumatic epilepsy in rats. Corollary with these reports, our data suggest that Bio-catalyzer, Bio-catalyzer 2B and BIO No.66 may act as natural antioxidative health foods by scavenging the ·OH and providing a protective barrier against these radicals.