From the Institute of Pediatric Hematology, Moscow, Russia, and Sun-O International, Gifu, Japan

The combined use of irradiation and chemotherapy is a fundamental principle in modern cancer management, especially in children.1 The only limitation is that cytotoxic drugs enhance the radiation damage to normal tissues.2 Radiation therapy can induce acute and late reactions of normal tissue. Although acute radiation injury is mostly expressed in the rapidly proliferating  tissues such as skin, mucous membranes, spermatogonia, and hematopoietic cells, the late deleterious effects of irradiation occur in the central nervous system. The encephalopathy syndrome has been documented in about 50% of children with acute lympholeukemia (ALL) subjected to cranial and spinal cord irradiation for 4 to 8 wk.3 This includes headache, somnolence, anorexia, nausea, vomiting and sometimes unconsciousness.

Radiation-induced injury can be reduced by the administration of radioprotective agents. As the injury following the ionizing irradiation exposure is the most spectacular example of free-radical-mediated pathology, 4 it is not surprising that radioprotective agents usually possess free-radical scavenging properties. Thus, different types of superoxide dismutase (SOD) have been widely used5,6  as well as a-lipoic acid,7 N-actylcystein, 8 and vitamin E.9 Zinc is known to be one of the most important trace elements with antioxidant properties. 10 In addition, zinc aspartate was found to reduce significantly the irradiation toxicity against hematopoietic tissue11 and does not affect the antitumor activity of therapeutic irradiation.

There is evidence that a-TNF, capable of inducing the overexpression of mitochondrial Mn-SOD, increases the resistance of cells to radiation.12 Earlier, we showed13 that Bio-Normalizer (BN), a nontoxic natural food supplement produced by yeast fermentation of Carica papaya linn. is a powerful immunomodulator that stimulates macrophages and lymphocytes to produce a-TNF and interferons. In addition, BN exhibits free-radical scavenging14 and antioxidant15,16 activities. Therefore, it seems interesting to study the effects of the zinc aspartate and BN administration to children suffering from acute myeloleukemia (AML) and ALL in order to prevent the late encephalopathy syndrome. Effects of these drugs on childrens’ free-radical status, namely the oxygen radical production by blood leukocytes, the leukocyte CuZnSOD and MnSOD activities, and eythrocyte-reduced glutathione content, have been estimated. 17

Children aged between 2 and 15 yr who suffered from ALL (primary and relapse, 19 patients) and AML (9 patients) were studied. All children were examined and treated at the Russian Institute of Pediatric Hematology. They were treated by conventional chemotherapy (details of antileukemic chemotherapy can be found elsewhere in the literature) using cranial and spinal cord irradiation in dosages of 12-18 Gy for ALL patients and 18-22 Gy for AML patients. Children fulfilling all the eligibility criteria were randomized in three groups. The control group children (5 ALL and 4 AML patients) were on a conventional maintenance therapy for 1 mo after irradiation course. The second group of children (7 ALL patients) were additionally given 150 mg of zinc aspartate daily for 30 d. The third group of children (7 ALL and 5 AML patients) were administered 9 g zinc instead of BN. Used as normal subjects were 39 healthy Moscow children from whom informed consent was granted. This pilot clinical trial was performed in accordance with the protocol approved by the Ethics Committee of the Institute of Pediatric Hematology. (Informed consent of a patient or his/her parents was obtained before the beginning of clinical trials.)

Zinc aspartate (Unizinc) was a gift of F. Kohler Chemie GmbH (Germany). Bio-Normalizer was a gift of Sun-O International (Gifu, Japan). The other reagents for the cell isolation and the free-radical assays were purchased from Sigma Chemical (St. Louis, MO). To estimate quantitatively the deleterious effects of irradiation on the central nervous system, the total score of encephalopathy symptoms for each patient was calculated. The following score was assumed: for somnolence, 0.5; weakness, 0.5; headache, 0.5; nausea, 0.5; convulsion, 1.5; coma, 3.0. 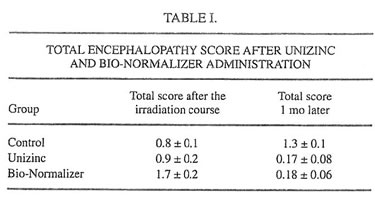 To isolate white blood (WBC), the blood samples (1.5 ml) were sedimented with 1.5 ml of dextran-metrizoate mixture (50 ml 6.2% dextrane/20 ml 38% metrizoate) at 25°C for 30 min. The cell-rich supernatant was centrifuged at 150 g for 10 min. Cell pellets were washed twice in Hank’s balanced salt solution (HBSS). The final suspension of 2-3 x 106 was prepared in the culture medium199. Cells were counted with a microscope, and their viability was assessed by exclusion of 0.1% trypan blue dye.

Luminol-dependent chemiluminescence (LDCL) was measured on an LKB luminometer model 1251. WBC suspension (20 ml, 2 x 106 cells/ml), luminol (50 mm, final concentration), and 0.85 ml of HBSS were mixed in a 1-ml cuvette at 37°C. After 5 min, the 0.1% suspension of latex (Sigma Chemical) in 0.95% NaCl soluiton was added, and the light emission was recorded continuously. The intensity of spontaneous LDCL and the differences between maximal values of the cellular response to latex and of spontaneous LDCL were measured.

Superoxide dismutase (CuZnSOD) activity in WBC was determined by the adrenaline method, 18 in which the rate of superoxide production was measured by lucigenin-amplified chemiluminescence (LgCL). Briefly, a sample of isolated WBC (0.2 ml) was lysed with ice-cold water. Lysate was added to an equal volume of ethanol-chloroform mixture (1:1 v/v) and centrifuged at 1500 g for 30 min. Protein content in supernatant was determined by the Lowry method.19 To measure the total SOD activity, 50 ml top clear supernatant was added to carbonate buffer (pH 10.2, a total volume of 900 ml) containing EDTA (100 mm) and lucigenin (100 mm) in a polystyrene cuvette, and the level of basal LgCL was registered continuously. Reaction was started by adding 50 ml adrenaline (100 mm) thought the dispenser. LgCL light sum for 5 min was recorded and compared with that of a control sample (50 ml water: ethanol: chloroform solution [2:1:1 v/v/v]). The total SOD activity was calculated from calibration curve using commercial SOD as a standard and expressed as ng/mg protein. For the determination of MnSOD activity, CuZnSOD was inhibited by the addition of NaCN (4 mM) to the supernatant. After that, the LgCL measurement of MnSOD activity was performed as described above. The CuZnSOD activity was estimated as a difference between the total and MnSOD activities. Erythrocytes were obtained after blood sedimentation on dextran-metrizoate gradient and washed twice in the cold potassium phosphate buffer, pH 7.2. The content of reduced glutathione was determined by the Beutler method. 20 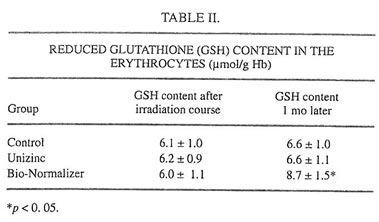 Nonparametric procedure were used throughout. Paired comparisons were made with Wilcoxon’s signed rank test.21 Statistical significance was assumed at p<0.05. Results are expressed as mean ± SEM.

Examination of children by pediatricians during and after the completion of clinical trial has shown that there were no toxic side effects, allergic reactions, or other adverse events during the Unizinc and BN administration. Biochemical and immunological analyses confirmed these observations (data not shown). Six of 9 children (66%) of the control group exhibited some neurological symptoms immediately following irradiation exposure. The average score characterizing these symptoms was equal to 0.8 (Table I). One month later, this value became 1.3, which showed an increase in encephalopathy symptoms. These findings are in good agreement with previous observations that the most severe neurotoxic effects of therapeutic irradiation occurred 4-6 wk after the irradiation course was stopped. At the same time, only one of seven children (14%) treated with Unizinc exhibited moderate encephalopathy; the average score of CNS damage immediately after the irradiation cycle was 0.93 and dropped to 0.17 in 1 mo. BN also was found to significantly suppress neurotoxicity of therapeutic irradiation (Table I; the average score after irradiation was 1.7, and 1 mo later it was 0.18).

It is well established now that glutathione is one of the major blood antioxidants responsible for the rapid inactivation of various oxidants formed during the metabolism of drugs or other xenobiotics or as the result of environmental hazard.22 In the present work it was found that the irradiation cycle slightly (statistically insignificant) decreased the level of reduced glutathione (GSH) in the erythrocytes (Table II). Unizinc administration had little effect, but BN administration substantially increased the content of GSH. It should be stressed that BN itself contains the comparatively small amount of SH groups (about 12 mmol/g, unpublished data). Furthermore, we found that blood-circulated leukocytes of ALL and AML patients produced surprisingly low intensities of spontaneous and latex-activated LDCL and had high activities of both CuZnSOD and MnSOD before the beginning of intensive anticancer therapy (Tables III and IV). Similar results were obtained for bone marrow leukocytes (data not shown). However, chemotherapy and the following irradiation exposure sharply increased the intensities of spontaneous and latex-activated LDCL in the blood leukocytes  (compared with donors and the leukemia patients before the treatment), indicating that in this case hydroxyl radical overproduction occurred (Table III).

At the same time, both chemo- and radiotherapy inhibited dramatically the main leukocyte antioxidant enzymes CuZnSOD and MnSOD (Table IV). The level of MnSOD in patients after chemotherapy became significantly lower than even a normal value. On the other hand, a 1-mo Unizinc and BN administration led to decreasing spontaneous and activated LDCL (Table III). The biggest inhibitory effect was found for BN administration in AML patients when the values of spontaneous and activated LDCL achieved normal levels. Zinc therapy decreased insignificantly CuZnSOD and MnSOD inleukocytes, whereas BN administration enhanced both CuZnSOD in ALL patients and MnSOD in AML patients.

These data suggest that the strong protocol treatment of lympho- and myeloproliferative malignancies caused the suppression of main intracellular antioxidant enzymes and drastically induced hydroxyl radical release from leukocytes, which can be the source of the CNS oxidative damage induced by therapeutc irradiation. Unizinc can treat such deleterious effects of irradiation by the inhibition of oxygen radical overproduction by circulated leukocytes. This inhibitory effect may be a consequence of the leukocyte NADPH-oxidase inactivation and/or the direct scavenging activity of zinc ions.

Moreover, we supposed that the aspartate ligand, a neurotransmitter amino acid, can accelerate zinc penetration through the blood-brain barrier via binding to the specific aspartate receptors on the surface of the neuronal membranes. Therefore, zinc aspartate can readily affect free-radical-mediated processes occurring in the central nervous system. The reasons for beneficial radioprotective effects of BN seem to be more complex. Besides its pronounced free-radical scavenging activity, BN appears to increase the organism potency to be adapted to oxidative stress, inducing glutathione synthesis and/or preventing glutathione oxidation and enhancing MnSOD activity in leukocytes, especially in patients. Probably, BN stimulates MnSOD indirectly, inducing a-TNF production by myelocytic leukocytes. Collectively, zinc aspartate and BN could be regarded as essential components of supportive care of cancer patients after intensive irradiation course.