Introduction: Bio-catalyzer, a natural health food sold in Japan and in the Philippines, has alleged therapeutic action on a number of cancers and other human diseases caused by free radicals. Its activity has been linked to its hydroxyl radical quenching action in vitro [1], and to its thiobarbituric acid reactive substances (TBARS) inhibiting property in vivo using the FeCl3-induced epileptic model in rats [2]. An unpublished study (Santiago et al.) has suggested that bio-catalyzer may act as a prophylactic agent in attenuating age-related diseases and prevent the age-dependent accumulation of methyl guanidine, a potent uraemic toxin synthesized from creatinine.

Chemicals that can induce heritable changes in genetic structure, and thus in the cell phenotype, are called ‘genotoxic agents’[3]. A widely accepted in vivo assay for genotoxicity is the micronucleus test of Schmidt [4]. The bone marrow is a good source of a high number of actively dividing cells. Chromosomal aberrations are manifested by the presence of micronuclei in young polychromatic erythrocytes due to the breakage of the chromosomes or spindle misfunction at anaphase [5].

At present, no studies have been done to screen for the possible effect of Bio-catalyzer against genotoxic agents. We have attempted to determine the potential antigenotoxic effect of Bio-catalyzer against the anti-tumour drug cyclophosphamide, which is a strong alkylating agent, and known carcinogens, dimethylnitrosoamine and cyclophosphamide, using the micronucleus test.

The micronucleus test of Schmid [4] was used to assess the effect of Bio-catalyzer on the genotoxicity of DMN and cyclophosphamide. Both oral administration (using a steel gavage attached to a syringe) and intraperitoneal administration of the two mutagenic compounds and Bio-catalyzer were used. A dose of 15 mg kg-1body weight for dimethylnitrosoamine and 60 mg kg-1 body weight for cyclophosphamide were given to the mice.

Bio-catalyzer (250 mg ml-1) was given 1 h later after each administration. 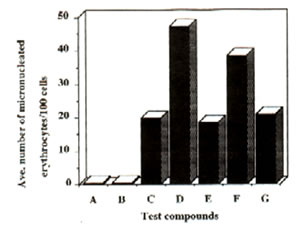 Figure 1: Effect of Bio-catalyzer on the genotoxicity of dimethylnitrosoamine (DMN) and cyclophosphamide (cyclo) (intraperitoneal administration). Number of micronuclei for each of the compounds and systems tested. Values are total averages from 12 slides. A – distilled water, B – dimethylsulphoxide, C – Bio-catalyzer, D – DMN + Bio-catalyzer, F – cyclo + Bio-catalyzer. 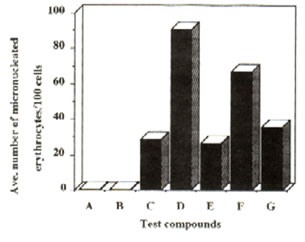 Table 1: Percent reduction in the number of micronuclei induced by DMN and cyclophosphamide.

The femur was removed and bone marrow cells were flushed out from the femur using 10% fetal calf serum. The cells were separated from the supernatant by centrifugation. Four slides of the cells per femur were then prepared, fixed with methanol, stained and scored for the number of micronucleated polychromatic erythrocytes.

Dimethylnitrosoamine, (CH3)2N—N=O, an established muta-carcinogen, is formed from secondary amines found in tobacco leaves and is metabolised by liver enzymes. This leads to release of carbocations, positively charged carbon-intermediates, which are very active alkylating agents of DNA[6].

Cyclophosphamide is an anti-tumour drug [7] that acts as a bifunctional alkylating agent of DNA after activation by the cytochrome P450 system, which are  associated with the microsomal fraction of the liver [8]. Biotransformation of these two compounds into active alkylating agents of DNA could escalate to the chromosomal level visible under a light microscope [9]. Administration of Bio-catalyzer could have inhibited the alkylation of DNA. The induction of micronuclei by alkylating agents seems to have been restricted to the period of DNA synthesis.

Inhibition of spindle formation (due to DNA alkylation) during the last cell cycle of the erythroblast leads to the occurrence of micronuclei in the polychromatic erythrocytes after expulsion of the nucleus [9]. In the presence of Bo-catalyzer, it is highly probable that DNA alkylation is low, meaning error-free repair of DNA.

At present, a number of naturally occurring antimutagens have been investigated. Minerals, such as copper ions, are said to interact with mutagens, preventing their metabolism [10]. Organic compounds such as tannins [11], phenols, indoles and flavones, commonly found in plants, are known to be antimutagens [12]. Vitamins, specifically ascorbic acid (vitamin C) and atocopherol (vitamin E), inhibit the formation of nitrosamides from nitrite and amines both in vivo and in vitro [12].

Mutagenicity induced by pyrolysates have been found to be reduced by protein-bound compounds in vegetables [13]. These naturally occurring antimutagens may possibly be present in Bio-catalyzer, which could account for its effect on the mutagenicity and clastogenicity of dimethylnitrosoamine and cyclophosphamide.