II. THE EFFECTS OF BIO-NORMALIZER ADMINISTRATION TO THE RATS WITH LUNG INFLAMMATION INDUCED BY COBALT IONS

It is known that the exposure to cobalt-containing dust is associated with development of lung disease. Characterized at its extreme by potential fatal interstitial fibrosis. Such cases have been described in workers from the hard metal industry. Where cobalt was applied [1]. Until now, the biochemical mechanisms of cobalt toxicity remain obscure. But one may expect that at least partly they should be associated with free radical- mediated lung damage. Indeed it has been demonstrated that cobalt ions catalyze the formation of active oxygen radicals in the decomposition of hydrogen peroxide [2.3] and induced hydroxyl radical-mediated DNA damage [4]

Recently Nemery and co-workers have demonstrated that in vivo and vitro cobalt activity is accompanied by a decrease in the level of reduced glutathione GSH and an increase in that of oxidized glutathione GSSG [5] although the subsequent study subsequent study [6] failed to show the dependence of lung injury on the Co- stimulated decrease in the GSH in the GSH level, nonetheless, the effect of cobalt on the content of GSH, one of the major endogenous antioxidant may be very important. Our previous in vitro study [7] demonstrated the one more mode of cobalt prooxidant activity, namely the stimulation of oxygen radical production of phagocytes. Thus, it may suggested that in vivo toxic effects of cobalt are a consequence of various free radical-mediated processes, including the catalysis of the decomposition of hydrogen peroxide to form a very reactive hydroxyl radicals, effecting the content of endogenous antioxidants, and the stimulation of oxygen radical release by phagocytes.

It has already been shown that Bio-normalizer (BN) is an effective hydroxyl radical scavenger [8] and a strong inhibitor of oxygen radical production by Neutrophils [9]. Therefore, it seems quite interesting to study its effect on the toxic activity of cobalt ions in animal experiments.

Experiments were carried out on male Wistar rats of body weight ranging from 150 to 200 g. The animals were kept on standard chow diet and water ad libitum under normal laboratory conditions.

Alveolar macrophages and Neutrophils were prepared by pulmonary lavage using the slightly modified method [10]. Briefly animals were sacrificed by intraperitoneal injection of sodium thiopental (50mg/kg).  The tranchea was cannulated and the lungs were lavaged five times with 10 ml of HBSS. Ph 7.4 AT 37°C. The lavage fluid was filtered through a nylon cloth. The filtrate was centrifuged at 300xg for 10 min. cell content was determined in a hemocytometer and the deferential count was performed microscopically in the cell smears. To separate mononuclear and polymorphonuclear cells, cell pellet was resuspended in 1 ml of HBSS, layered carefully in Ficoll-Paque gradient (ρ-1.077 kg/l) and centrifuged at 600xg for 40 min. The upper layer consisted of mononuclear cells (macrophages and lymphocytes). And the pellet contained granulocytes (mainly Neutrophils). Macrophages and neutrophil preparations were >95% pure and 98% of the cells excluded trypan blue. The isolated cells were resuspended and stored at 4°C in HBSS supplied with 5% fetal calf serum.

CL measurements in a luminometer mod 1251 (LKB. Sweden) were monitored at 37°C and continuous mixing on a programmed IBM computer. All experiments were carried out in duplicates. Each point was a mean value of 3 or 4 independent measurements.

A sample of 5×105cells, 400 μM luminol or lucigenin, and 0.5 ml of HBSS pH 7.4 were placed in 1-ml polysterene vials. The vial was then placed in the thermostat detection chamber of a luminomiter. After measurement of background for 5 min, CL was activated by introducing of PMA (10 ng). The CL-response was measured as a mean mV signal over 10-s intervals for a 10-min period. Amplitude of the CL-response was defined as a difference between maximal intensity of activated CL and intensity of spontaneous CL and expressed as mV 106 cells.

Reduced glutathione concentration was measured in erythrocytes using the DTNB reduction method [11].SOD activity was determined by measuring the superoxide-

As it should be expected, in all cases the administration of cobalt sulfate to rats resulted in acute toxic effects. Although all animal studies were carried out during 7day.as a rule, BN application was effective during this period of time, although in some cases its effects ended much earlier.

Intratracheal instillation of cobalt sulfate decreased the survival of rats more than by 50% (Fig1). Feeding the rats with BN after cobalt administration did not affect significantly the death rate during first 3 days, but sharply increased the survival of rats in the last 3 days. In contrast the BN administration before cobalt instillation practically suppressed toxic effect of cobalt during first 3 days; however, after that, the effect of BN application became insignificant.

The administration of cobalt sulfate to the rats sharply increased both the wet and dry weight of the lung, the lung edema being achieved a maximal value already on 3th day after instillation (Fig.2). BN administration also resulted in an increase in rat weight but, in contrast to cobalt action, its effect was a temporary one and became insignificant to the end of the experiment. Although BN administration did not lead to a drastic suppression of cobalt-induced inflammation (as it was observed by us in the case of dextran-and asbestos-stimulated inflammatory processes), nonetheless, it diminished cobalt-induced lung edema by 15-20% on 7th day after the beginning of the experiment.

The effects of cobalt and BN the glutathione content

Reduced glutathione (GSH) is one of major endogenous antioxidants, and a decrease in its content is a typical characteristic of oxidative stress. As it was mentioned above, Nemery and co-workers have found [5.6] that the intratracheal instillation of CoCl2 into the hamster lungs decreased the GSH level and increased the GSSG level. In contrast, our data show that the cobalt sharply enhanced GSH content in the rat lung (Fig.3). The origin of this discrepancy is unknown, although it may be a consequence of applying different cobalt salts as well as different animals.

The mechanism of cobalt and BN+ cobalt stimulation of reduced glutathione synthesis in the lung is nuclear. The effect is purely synergistic as BN alone exhibited no action on GSH content. This result may be of a real importance for the understanding of some beneficial effects of BN o free radical-mediated destructive processes, which are frequently difficult to explain by its direct antioxidant action. It is might be suggested that BN is able to enhance synergistically the synthesis of glutathione not only in the case of toxic cobalt ions but also by the interaction with certain nontoxic substances (antioxidants, substrates, coenzymes, etc.). Therefore, this new mechanism of BN antioxidant activity should be further studied in in vitro and in vivo studies.

In contrast to the enhancing effect of cobalt ions on glutathione content, they depressed erythrocyte activity of SOD, one of the most antioxidant enzymes, by 1.5-2.0 times (Fig 4). It is interesting that BN administration together with preliminary feeding temporarily restored the SOD level on 3th day. Cobalt instillation practically did not affect SOD activity in leukocytes, but BN administration preliminary feeding strongly enhanced it again on 3th day (Fig.5).

The effects of cobalt and BN on luminol-and lucigenin-amplified chemiluminescence produced by rat leukocytes and aalveolar macrophages.

We have earlier shown in the in vitro experiments [7] that cobalt ions were strong stimuli of luminol-amplified chemiluminescence (CL) produced by rat macrophages. In contrast, they had effect on lucigenin-amplified CL. On these grounds, it was suggested that cobalt ions enhanced the production of highly reactive hydroxyl or hydroxyl-like free radicals and did not affect the superoxide production. This conclusion was supported in the study of the effects of inhibitors; it was found that SOD practically did not inhibit luminol-amplified CL while hydroxyl radicals scavengers (NDGA and dihydrolipoic acid) and metal chelators (EDTA) and EGTA) drastically diminished it (by 85-95%).

The present in vivo study developed a much more complicated effect of cobalt ions on oxygen radical production by phagocytes. It seen that on 7th day cobalt nearly completely inhibited luminol –amplified CL of leukocytes and enhancing lucigenin – amplilied CL and (Fig. 6) The effects of BN administration was uncertain  but not a very big one. In the case of macrophages cobalt did enhance luminol-amplified CL aud inhibited lucigenin-amplified

CL while BN administration strengthen the effect of cobalt on luminol-amlified CL and enhance lucigenin-amplified CL (Fig.7) These findings are in the line with our previous result concerning the effect of of BN on the stimulation of phagocytes. We have found earlier [9] and now that BN inhibited the release of reactive oxygen species (measured by luminol-amplified CL) by neutrophils and due to that suppress inflammatory process. On the other hand, BN enhance luminol-amplified CL produce by macrophage and by that enhance their phagocytic activity. These data show once more universal normalizing activity of BN.

1. BN administration to the cobalt-injected rats diminished their death rate.

2. BN is able to enhance synergistically the level of reduce glutathione.

4. BN is able to inhibit oxygen radical release by leukocytes and enhance that by macrophages that determined BN ability to suppress inflammation and increase phagocytic activity.

Figure 1
The effects of cobalt instillation and BN administration on the rat survival.

Figure 2
The effects of cobalt instillation and BN administration on rat lung edema.

Figure 3
The effects of cobalt instillation and BN administration on GSH content in rat lung.

Figure 4
The effect of cobalt instillation and BN administration on SOD activity in rat erythrocytes.

Figure 5
The effects of cobalt instillation and BN administration on SOD activity in rat leukocytes.

Figure 6
The effects of cobalt instillation and BN administration on luminol-amplified CL produced by leukocytes and macrophages.

Figure 7
The effects of cobalt instillation and BN administration on lucigenin-amplified CL produced by leukocytes and macrophages. 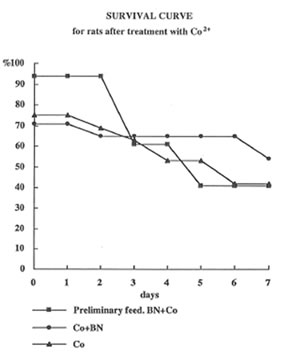 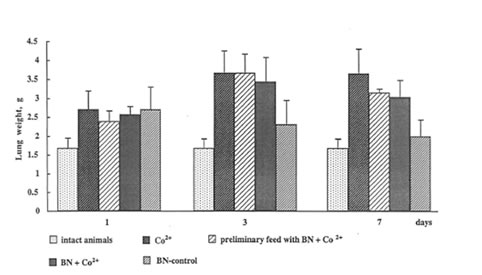 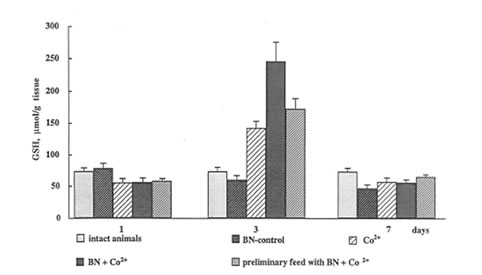 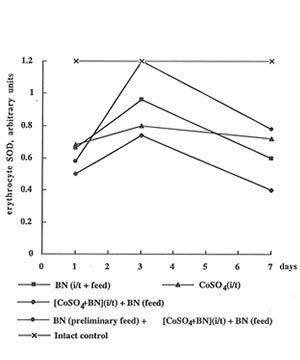 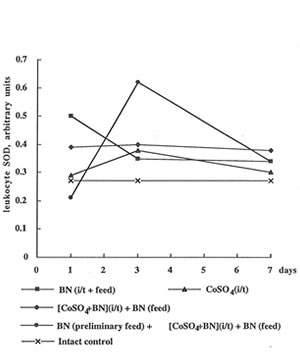 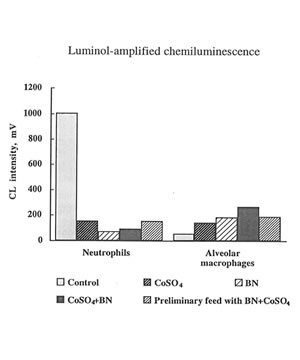 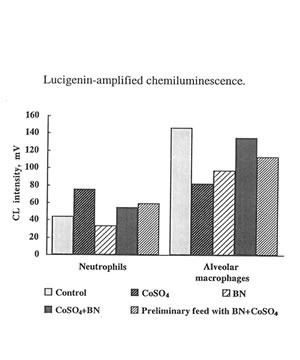